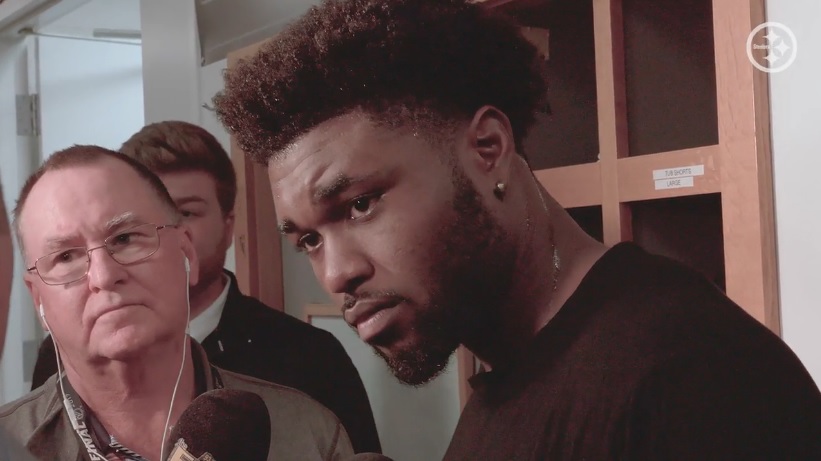 Tomorrow’s is last call for those on the Pittsburgh Steelers’ roster bubble to lock up a roster spot. It’s been done before, look no further than Josh Dobbs last year, but there’s an art to balancing that pressure without succumbing to it. And this rookie class seems well aware of it.

“I don’t want to think when I’m out there,” Sutton Smith told reporters via the teamsite. “That’s the worst thing any player can do. Start thinking and playing really slow.”

There’s good reason for a guy like Smith to feel the pressure. An injury caused him to miss the first two weeks making Sunday night against Tennessee his NFL debut. He played a lot, 55 snaps on defense, another 15 on special teams, and though it was critical for him to get out there, he had a quiet game. Officially, he finished with just one tackle and had trouble holding the point of attack against the run and constantly run up the arc as a pass rusher.

It makes the finale against Carolina all the more important to ensure he lands on the practice squad and isn’t cut outright as 7th round pick Josh Frazier was a year ago.

Fellow 6th round selection Ulysees Gilbert III has had a much brighter and healthier summer and has put himself in good position to make the 53 man roster. But he’s not a lock, making tomorrow night critical for him too. Instead of focusing on what the game means, he’s enjoying the fact he gets to play a game for a living.

“It’s a beautiful game. I love playing…it’s just a blessing to be here and I’m excited to get to continue to play.”

And though it’s not like every other game, Gilbert III is using that approach to get his mind right

His special teams snaps and value give him the edge as the last linebacker on the 53 over someone like camp darling Tuzar Skipper, who has played just three snaps on special teams all preseason. Gilbert III has impressed defensively too, showing range and ability to defend zone plays while being a reliable tackler, an area he struggled with at Akron. If the fourth game looks like the first three, his odds of making the team are high.