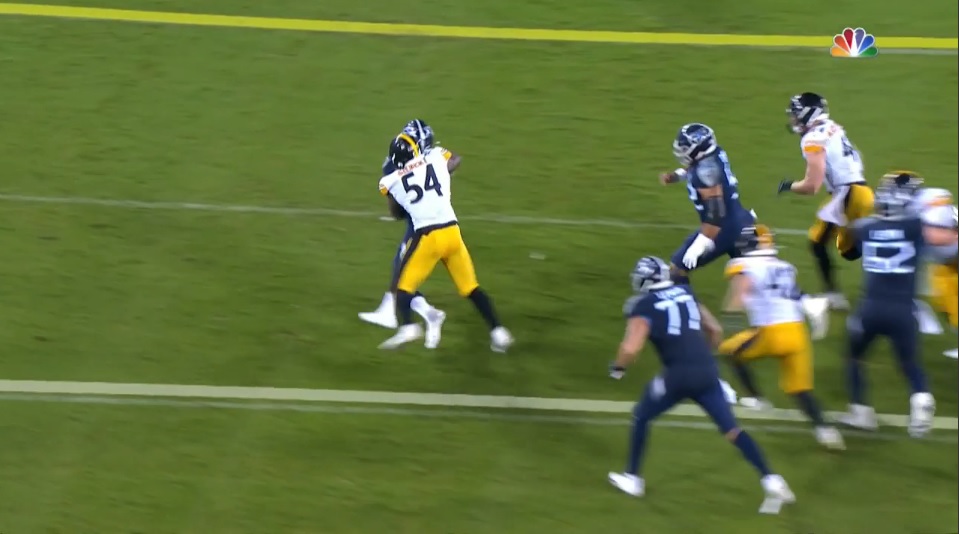 Throughout the season follow each game I will be taking a look at the Pittsburgh Steelers rookies and how they fared each week.  This will consist of thoughts such as the positive and negatives from that game, areas to watch or work on and clips to support what I’m sharing. Hopefully, this will shed some insight on some things you may or may not have seen.

Devin Bush/ILB – He got right back to what he was doing in game one with the first tackle right at the line of scrimmage. He’s showing improved hand usage to hold off the blockers and speed to cover RB’s out of the backfield and TE’s downfield. Showed good awareness coming on green dog blitz and when the RB’s decided to not block to change of direction and take him to the outside.

Diontae Johnson/WR – Did not play (unknown)

Justin Layne/CB – Showed solid work both as a gunner and against the gunner on the punt teams. I would like to see him get his hands on and disrupt the gunner a bit earlier. He was also on kick cover and was generally one of the first guys down the field.  Still giving up too much space on short area routes even in Press coverage but that will come.

Thank goodness for Layne on this play because I count 8 guys chasing the fake. Layne passed off his receiver to the safety and came back to break up the play with a hit the made the receiver flail his arms like an inflatable tube guy outside your local mattress store.

Zach Gentry/TE – I would like to see a little more urgency and quickness to get in and out of his routes.  He’s not going through the motions but there isn’t much suddenness there. Adjusted well on his lone catch and was overthrown by Joshua Dobbs on two others. He even got in on a tackle on punt coverage.

Sutton Smith/OLB – He finally made his first appearance and played the most snaps of any player. Overall, it wasn’t a great first game.  There wasn’t a lot of variance in his pass rushes with most being speed up the arc and he struggled to stay square and get off blocks.  He did get some penetration a couple times to force the RB to change his angle.  It was good to get him a lot of reps on defense and special teams and maybe his abdomen was still bothering him. Really needs to add some strength over the next year.

This is a solid rep by Smith facing off with Taylor Lewan (77) he gets a good push to move the LT back but can’t disengage leaving Gilbert to make the tackle.

Isaiah Buggs/DL – This was probably the worst game that Buggs has had so far. He didn’t’ have much success against the run. He was getting turned too often and unable to sustain his anchor like he did last week. He looked a little better rushing the passer get some penetration with quickness around the blocker. Not his best but I like what he’s done so far.

Ulysses Gilbert III/ILB – My biggest concern with Gilbert at this point is working through traffic. On running plays at him or to the outside to his side he seems to see more clearly and diagnose better. On runs away from him where he has to work through the trash avoiding bodies of opponents and teammates he gets caught in the wash and becomes less effective.

Derwin Gray/OG – Started with a holding call against him and got away with a blatant one in the last quarter. He needs to improve his hand placement and ability to mirror in one on one so he can sustain blocks. He had a lot of defenders slipping around him. He also struggled to anchor seeing him pushed back to the QB on 3 occasions. He did look a little more comfortable on lateral blocks on outside zone/stretch runs.

Here is one of poor anchors by Gray. You see him get driven right back to the feet of the quarterback.

Fred Johnson/OG – Another solid performance by Johnson he started with a pancake on a double team block with B.J. Finney.  Showed good awareness on stunt jamming the DT to the inside before coming out to take on the blitzing linebacker. He still is reaching a bit with his punch in pass protection but overall he’s been an impressive free agent find.

On the reverse to Diontae Spencer start by helping to push the DT. Then he needs to get out and wall off the linebacker but gets caught crossing his feet and the LB gets around him. But, and Alex will proud of this, Johnson recover to do the hip by/airplane block to slow two potential tacklers and give Spencer some room.

Tuzar Skipper/OLB – And here is the other free agent signing that continues to Impress. He got his third sack of the preseason and second forced fumble. He showed the ability to set the edge, blow up blockers and make tackles with blockers hanging on him. He displays solid awareness on the backside to not chase the fake on bootlegs and the power to bull through right tackles. Will the lack of special teams play hurt his chances to make the 53?

Dravon Askew-Henry/S – Wasn’t a productive game playing the nickel late in the game. He caught my earlier in the preseason and I don’t know if he’s done enough to stick around but I feel there is potential there.

Ian Berryman/P – Better job controlling his punts averaging 45 yards and angling a nice 52 yarder to the right corner that was caught at about the nine.

P.J. Locke/S – Locke was a non-factor getting only four snaps and all coming on special teams.

Trevon Mathis/CB – Here is another player who I feel has some potential. He got to play quite a bit in the game and wasn’t targeted often. He plays a lot of off Man but seemingly close enough to the receiver that the QB doesn’t go his way. He did creep up to far on a flat route in Zone that allowed a throw over his head to an out route. Could he take a practice squad spot if the Steelers pass on keeping Brian Allen?

Travon McMillian/RB – More mop up duty for Travon with one carry that the whole offense decided it was time to not block anymore.

Trevor Wood/TE – With Gentry back Wood didn’t get as much time as last week. He wasn’t targeted and was okay as a blocker. Probably not showing enough to stick around.

Matthew Wright/K – 2 touchbacks on kickoffs and a clean 31 yard field goal. Not doing anything wrong but won’t unseat Chris Boswell.