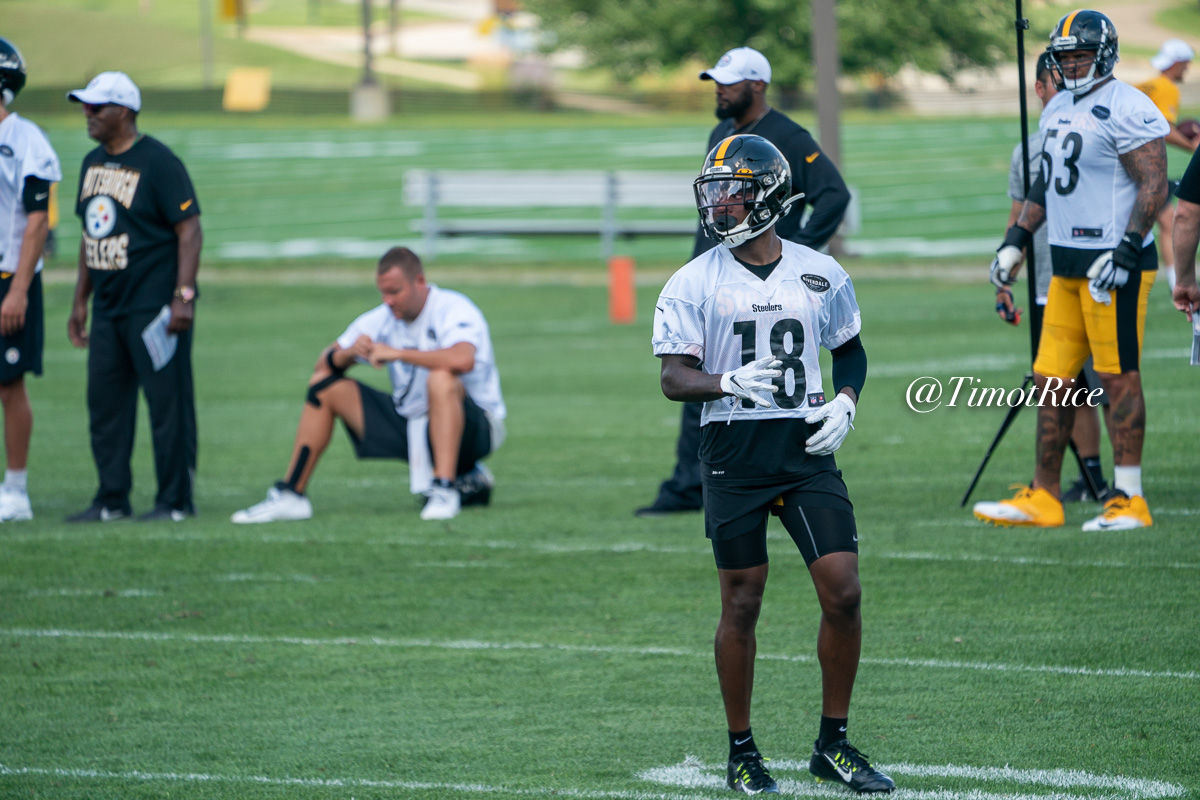 Pittsburgh Steelers rookie wide receiver Diontae Johnson suffered a groin injury during the team’s Sunday night practice and it will now be interesting to see if he’s able to resume work when the team returns to the practice fields of Saint Vincent College on Tuesday. Johnson’s return to practice on Sunday came just one day after he missed the team’s Saturday practice due to an injured hip that he suffered Friday night at Latrobe Memorial Stadium. Those seemingly minor injuries aside, Johnson has reportedly progressed nicely at the start  of training camp after having a nice set of OTA practices. Friday night, Steelers quarterback Ben Roethlisberger was asked to comment on Johnson’s progress during his interview with SiriusXM NFL Radio and he gave a positive report on the Toledo product.

“Only the good players come out of the MAC, you know,” Roethlisberger first joked as he and Johnson both played their college football in the Mid American Conference. “No, you know, really excited about what he brings. You know, we spent a lot of time in the classroom working hand signals and working concepts and things with him, because on the field he’s got it. Right? On the field he shows speed, he shows hands, awareness, toughness, so I’m excited for what he can bring. It’s always hard for young guys, rookies especially, at the receiver position to come in and really show immediate impact. But he’s got a chance.

Obviously, Johnson missing time during training camp isn’t ideal. However, there are still four preseason games yet to be played and him suiting up in all of them would certainly help make up some for any practice time that he’s missed. Will he be healthy enough to play this coming Friday against the Tampa Bay Buccaneers? We’ll see.

Roethlisberger’s positive comments and all, it still sounds like Johnson won’t be as big of a contributor at the start of the 2019 season as most seem to project him to be. Steelers general manager Kevin Colbert has already said a few times in recent interviews that Johnson needs to get stronger and that the hope is that he can become a significant contributor as his rookie season wears on.

Barring an injury to veteran wide receiver Donte Moncfrief, who is currently dealing with a finger injury on his left hand, he’ll be the Steelers starting X to open the 2019 season. Johnson will hopefully have shown enough to be Moncrief’s backup at that position by Week 1. While Johnson’s likely to see some offensive snaps at the start of his rookie season, most of those are likely to come in personnel groupings that include more than three wide receivers.