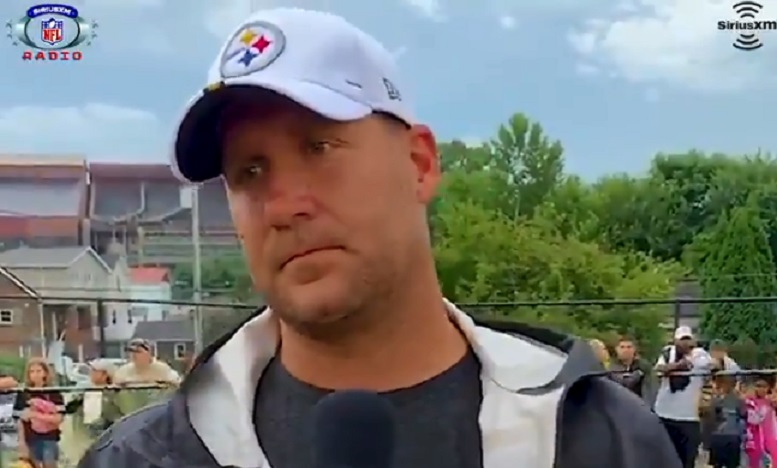 Last season the Pittsburgh Steelers running backs combined to catch 84 passes for 714 yards and 4 touchdowns. Now, with wide receiver Antonio Brown no longer in Pittsburgh, there’s a chance that the Steelers three running backs get even more involved in the passing game during the 2019 season. Whether they will or won’t is yet to be seen but Steelers quarterback Ben Roethlisberger sure seems to have full confidence this year in the receiving skills of his top-three running backs, James Conner, Jaylen Samuels and rookie Benny Snell Jr..

Ahead of the Steelers Friday night practice at Latrobe Memorial Stadium taking place a few days ago, Roethlisberger conducted his annual interview with Jim Miller and Pat Kirwan of Movin’ the chains on SiriusXM NFL Radio and during it he was asked to talk about the receiving skills of his top-three running backs. Roethlisberger obliged and started with a receiving scouting report on Conner, who caught 55 passes for 497 yards and a touchdown last season.

“Obviously we know what James can do,” Roethlisberger said. “James, he might not wow you in doing anything in terms of catching the ball out of the backfield. He’s not gonna run great routes and just win on people, but he’s going to be dependable. He’s going to catch everything you throw him. He’s going to be in the right spot every time. So, I know if something’s not open down the field and I know my check-down is short left, he’s going to be there. And when you get him the ball, good things are gonna happen.”

Roethlisberger then proceeded to talk about the receiving skills of Samuels, who recorded 26 receptions for 199 yards and 3 touchdowns in his limited rookie season playing time in place of Conner.

“Jaylen, I think we all saw what we can do last year with him,” Roethlisberger said of the North Carolina State product. “He’s a little bit more of a receiving running back. You know, we can actually flank him out. He’s got great hands and we can do some kind of interesting things with him in the two running backs situation.”

In case you’ve already forgotten, Samuels caught 201 passes for 1,851 yards and 19 touchdowns during his four years at North Carolina State and a lot of those receptions with him lined up in area of the field other than in the backfield.

As for Snell, who was drafted by the Steelers this year in the fourth-round out of Kentucky, while he’s yet to play in an NFL game yet and didn’t get a lot of opportunities to show off his receiving skills during his college career, Roethlisberger has seemingly been impressed with what he seemingly offers the offense during his rookie season as a pass catcher.

“And Benny, you know, I didn’t know what to expect coming in,” Roethlisberger said of Snell, who caught just 28 passes for 216 yards during his college career at Kentucky. “You know, you see this big bruising running back and a guy that’s going to be physical. So I always try and throw bad balls to guys just to see what they can do and I threw him a lot of bad balls and he seemed to catch every single one. I’m so pleasantly surprised with him in the passing game.”

Obviously, Snell being behind Conner and Samuels on the Steelers running back depth likely means he won’t play very much on offense during his rookie season. That speculation aside, nobody dreamed that Samuels would have seen as much playing time as he ultimately did as a rookie.

Regardless of which running back logs whatever amount of playing time this upcoming season, you can bet that position will once again see its fair share of pass targets. Is 100 total receptions for the Steelers running backs possible in 2019? That number might be a little high, but more than 80 should be expected once again.