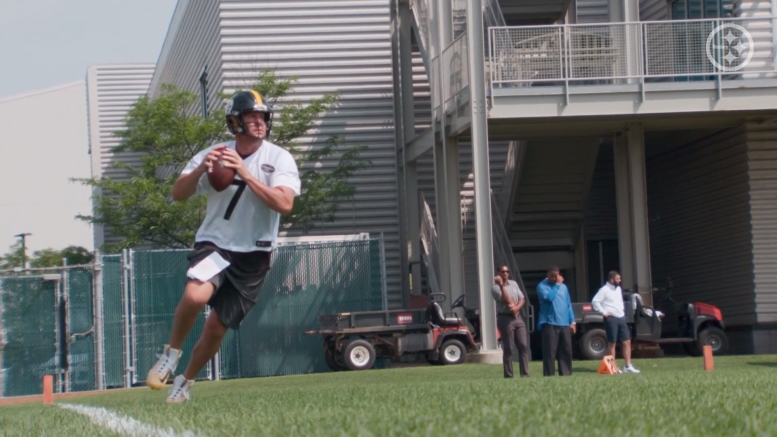 For all the talk about new pieces on defense and changes at the wide receiver position, the key to the 2019 season for the Pittsburgh Steelers will be, as it has been for some time, however far quarterback Ben Roethlisberger is able to take them. that’s not to say that he can do it all on his own—even when Drew Brees won the Super Bowl, he has the benefit of an opportunistic defense—but there was still meat on the bone to improve over his 2018 performance.

Even though he through for a league-high and team-record 5129 yards, and a team-record 34 touchdown passes. While those are all good to great number, they don’t tell everything there is to tell, and the rest of the league seemed to agree, as he did not even make it into the Pro Bowl. It’s not known whether or not he was an alternate and declined to go, it must be said.

But the biggest question for him this season, as posed by those on the outside, is whether or not the offense can be as good—whether or not he can be good—without wide receiver Antonio Brown, the perennial All-Pro who went AWOL starting at the end of last season and has seemingly had a building mental or emotional breakdown since then, both before and after he forced a trade to the Oakland Raiders.

The common tale that developed would be that Roethlisberger would be as motivated as ever to put together he best season to show that it was he who made Brown who he is, and not the other way around. While it was a theory that always sounded good on the service, I don’t think that I ever actually saw it substantiated anywhere in any way.

It did come up yesterday in Peter King’s weekly column, however, as he recounted his trip to the Steelers’ training camp last week leading up to the first preseason game. “It’s understandable that he will miss the great Brown”, he wrote, “but I am also told that he is supremely motivated to prove he can be just as great without Brown than [sic] he was without him”.

Who told him this? I have no idea. But he spent a couple of days in Latrobe, so I would imagine that somebody told him there. Some have pushed back against the idea of a ‘motivated’ Roethlisberger, but there is something innate in us humans that allows us to reach a certain level of drive not otherwise accessible without the aid of some exterior motivation.

Would I attribute a career year specifically to not having Brown around and wanting to show people that he can be just as good without him, and that he can create the next Brown, as he created the first? Probably not. I would just look at the tape and describe what he did. Could it be on his mind? I’m sure it could, whether or not it actually has any tangible effect.