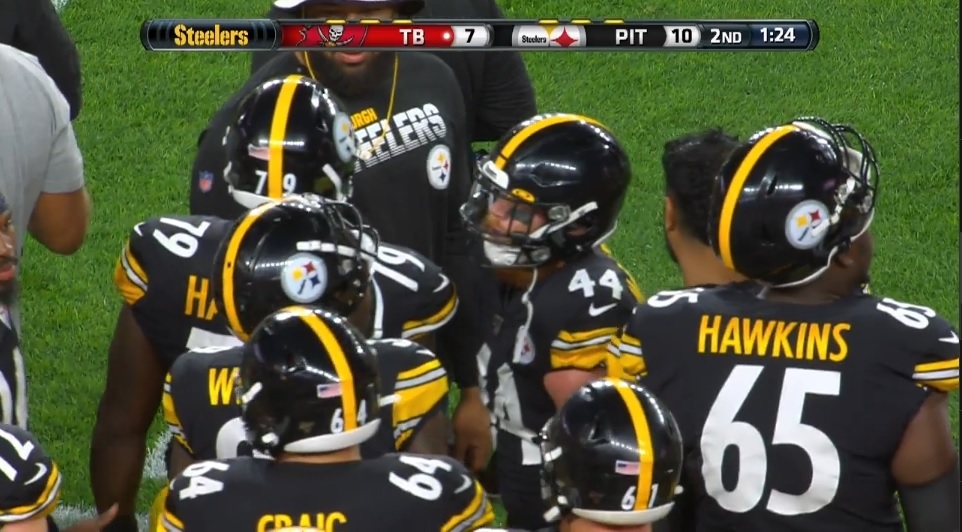 I was stuck in a business meeting in Reston, Virginia until 1PM so got a late start to the game. Luckily traffic was light and was able to check-in to the hotel and walk down to Heinz Field to catch the last part of the Steelers warm-ups. A fair-sized crowd showed up. My estimate is that the stadium was 60% full. Ryan Shazier was on the field with the team. A lot of players did not dress but I am happy that many of the starters were saved for another day. As an average Steelers fan, my main interest was to see how players lower down on the pecking order would perform.

Matthew Marczi described what we should watch for in the game.  He highlighted Devin Bush. “Can he show the sort of immediate impact the Steelers were expecting to see …?” With some wide receivers out, James Washington’s big play and consistency was another area to look for. If you haven’t read it already, it is an interesting read to compare with what transpired on the field tonight.

Attending a game can be extremely exciting. A drawback is that the team shows very few replays in the stadium. I witnessed the game in person, but I am sure once I get home and watch the game with replays and analysis my understanding of what happened during the game will change. With that caveat, here it goes.

In the first half, the offensive line did not seem to open holes for the running game. Joshua Dobbs tried throwing downfield, but he was getting happy feet. Two scrambles for good yardage had the fans cheering. My worry was that these were passing plays. Mason Rudolph seemed more comfortable in the pocket. Standing tall and getting the ball out sharply. He had to scramble a few times but was looking downfield for a receiver. The offensive line buckled early. Fred Johnson appeared to get beat with Dobbs sacked near the goal line. The line appeared to steady as the game continued. Benny Snell got a lot work. He was getting stuffed early but after a couple Rudolph passes, he got loose for a good gain. Jaylen Samuels hit the hole hard for 22-yard game.

James Washington looked strong. He had two catches in the end zone. The referees ruled him out of bounds on one. From our limited view we thought Mike Tomlin should have challenged. Television viewers have more camera angles and some replays. The other catch was a touchdown that he just snagged from the air. Looked like good pass to protect the ball and great body adjustment to score. Johnny Holton’s catch and run were beautiful. I really thought he scored at first. No worries, Rudolph lobbed it up to 6-8 Zach Gentry for a score at the back of the end zone.

Surprisingly, Devlin Hodges came in much earlier than anticipated. I thought he played okay, but there is a clear gap between 4th string and the two vying to be Ben Roethlisberger’s back-up. Nice to see Tevin Jones get a score. Diontae Spencer had a better game as a punt returner than a receiver. Overall, it looks like James Conner with have a couple strong back-ups. Tight end is thin despite Gentry’s score. Wide receiver depth looks strong.

A common theme from previous years is a slow starting defense that is susceptible to the pass. Tampa Bay marched down the field on their first possession. It looked like it was going to be a long game. Thankfully, the first quarter ended with the Steelers down 0-7. Early in the game Devin Bush nearly intercepted a pass but a roughing the passer call would have negated it in any case. The defense made a big 4th down stop in the 2nd quarter and that rallied the team.

Bush was all over the field. He had 10 tackles most of them solo. He showed lateral speed and appeared extremely comfortable whether at the line of scrimmage or trying to cover receivers. Ola Adeniyi caught my eye as well. He was limping after one play but then ran back on the field to retrieve something and jogged off the field after a punt. Hope he is not dinged up too badly (Ed Note: Adeniyi was not named in Tomlin’s post-game injury report).

With Artie Burns out, we seemed thin at cornerback. At end of game saw both Trevon Mathis and Jermaine Ponder who the Steelers just signed this past week playing both the corners. Tampa Bay targeted Mathis several times. Isaiah Buggs asserted him self several times even though he did not record any statistics. Ulysses Gilbert III had 1.5 sacks, a forced fumble and intercepted the ball on a 2-point conversion attempt. Tyler Matakevich had some nice tackles and forced a fumble. P.J. Locke should have had a fumble recovery but tried scooping the ball up instead of falling on it.

After a scramble the Buccaneers ended up with the ball. Marcus Allen came in late and played a long time until the last few minutes. I was expecting him to dominate late in the game when teams had the bottom parts of their roster on the field. He made four tackles but had hoped for a splash play. Overall, the Steelers have several young players with a lot of potential. Devin Bush looks like he will be starting earlier rather than later. The pass defense schemes concern me but there is a patchwork of personnel so communications will be difficult.

Kudos to the special teams. There was one penalty on one kick return but Johnny Holton and Diontae Spencer returned kicks with authority. Holton had a long of 25 yards and Spencer 35 yards. Spencer also returned four punts averaging 13.0 yards. Impressive considering his first return netted zero yards. He took a lick but held onto the ball.

Chris Boswell looked confident, converting both field goal attempts including a 47-yarder. Jordan Berry had two exceptionally good punts. He averaged 44.5 yards with no return. Ian Berryman may have hurt his case. He kicked a long punt that went in for a touchback. Missed wonderful opportunity to pin Tampa Bay behind the 20.

The coverage teams played well. Tampa averaged less than 20 yards per kick return. Generally, starting around their 20-yard line instead of the 25. Matthew Wright added a 42-yard field goal. Wright also managed to land his kicks near the goal line or in the end zone. There are concerns about his leg strength but for this game he held his own.

I did not contribute to the Steelers Depot Live Update and Discussion Thread for this game but looked at the top comments.

Jason W had the top comment among the 670 1st half comments. “Anyone see that AB is refusing to play football again unless he gets to wear his old helmet. Lol. All the armchair GM’s saying (Kevin Colbert) got fleeced in that trade are about to get really quiet. The guy is losing his mind.”

Yoi. The blissful thing being at the Steelers game is that there was nary a mention of Antonio Brown. But it is hard to ignore. He was on a trajectory to be the all-time greatest Steeler receiver; some consider him the best.

Dave Brian gave a great tip for NFL General Managers, “Do not buy a used car from Steelers GM Kevin Colbert or acquire a WR from him via a trade.”

Steelers Depot respondents made 525 comments in the 2nd half.

Reader783 (Good JuJu!) led the way with “Spillane playing pretty well here…” It is nice to young players low on the depth chart getting some notice.

Thomas Hmmmm was impressed with one of the quarterbacks. “Rudolph just won the #2 spot. He looked over the whole field and stayed composed as the pocket broke down…”

Wreckless agrees, “VERY impressive by Rudolph there. Pressure didn’t even faze him.”

Remember folks, 1000 comments per half is the standard!

Even though this was a preseason game, it was satisfying that the Steelers held onto win 30-28. It got loud at the end as the defense tried to keep Tampa Bay out of the end zone and squashed the final two-point conversion attempt. The review of pass interference when referees do not throw a flag is disconcerting. Right now, I give the edge to Mason Rudolph over Dobbs but there are still three more games to sort it out. The Steelers look deeper at running back than last year. Someone must emerge at tight end otherwise I could see Colbert signing someone after rosters are cutdown. Pittsburgh looks like they have some depth at linebacker but right now the secondary looks thin. Both lines looked better as the game went on. It will be interesting to see who will get the playing time in the next game.

I always like to offer a music selection. Here is We’ve Only Just Begun by the Carpenters.