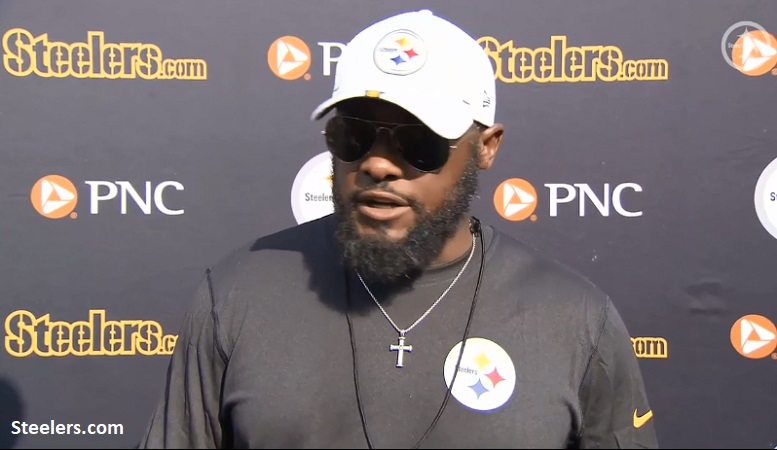 Training camp isn’t for, and certainly isn’t about, depth charts. Anybody who approaches Pittsburgh Steelers Head Coach Mike Tomlin with a question about such a topic during the first couple of weeks at Saint Vincent College, especially before they get into a first preseason game, does so at their own risk.

Because training camp is about learning, growing, building. That requires players getting different looks at different levels against different faces, which doesn’t suit itself well to constructing a hard and fast depth chart. Such a thing will take care of itself over the course of that process.

In answering a question about rookie wide receiver Diontae Johnson earning a heaping helping of first-team reps in yesterday’s practice with Donte Moncrief on the sideline with a finger injury, Tomlin told reporters, “we’re gonna be thoughtful about how we roll guys into groups”, which includes giving young players additional opportunities.

“I wouldn’t read too much into the groups at this juncture”, he went on. “We’re looking for certain matchups and things. The closer we get to in-stadium play, we’ll start worry about depth charts and such. Right now, we just want to challenge people, we want to see them in a variety of groups versus a variety of competition from an experience standpoint”.

Even when the in-stadium portion of the offseason rolls along, Tomlin still scoffs at the depth charts that he only begrudgingly puts together because it’s a requirement of the job, essentially telling reporters not to pay much mind to them, because they won’t be adhered to. And history supports the idea that preseason games won’t necessarily reflect the depth chart handed out prior to it.

Johnson was just one of the young players getting additional opportunities due to circumstances. First-year player Kameron Kelly, who had been running as the second-team free safety behind Sean Davis, worked his way into first-team reps with the latter’s finger injury. With both T.J. Watt and Anthony Chickillo missing yesterday, second-year Olasunkanmi Adeniyi got work with the first team as well. The day before, Chukwuma Okorafor got first-team work.

Of course it’s not just about first-team work. Third-team players getting second-team reps and things of that nature are also part of the discussion. Challenging players with reps at different level is all a part of the evaluation process, which is picking up the pace as we go further along.

This also includes the quarterback position, aided by veteran Ben Roethlisberger being given some time off in the form of limited-participation days and entire days off. This has allowed for extra reps for the other quarterbacks, with Joshua Dobbs and Mason Rudolph getting work with the first team at different times.