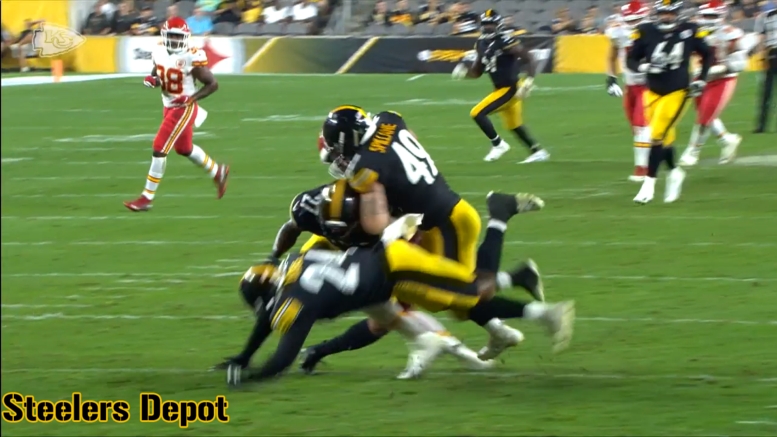 The Pittsburgh Steelers have about eight or so defensive backs that they seem to believe will or can contribute to the cause on defense this year. The starting cornerbacks are obviously Joe Haden and Steven Nelson, with Mike Hilton in the slot, and both Cameron Sutton and Artie Burns have gotten a lot of looks as well. Starting safeties Sean Davis and Terrell Edmunds were joined by first-year Kameron Kelly in a three-safety nickel package on Saturday that Hilton said he expects to see throughout the season.

But the two defensive backs who made Pro Football Focus’ Team of the Week for the second week of the preseason were not from that group. Second-year safety Marcus Allen, fighting for perhaps the fourth and last safety role, was the highest-graded safety of the week. And third-round rookie cornerback Justin Layne was chosen as the ‘flex’ player for the defensive side of the ball.

Allen a fifth-round pick in 2018, a player that the Steelers talked up quite a bit after he was drafted—saying they were very surprised he was still on the board that late after they had no fourth-round pick—and earlier this offseason as well.

But so far, he hasn’t really gotten a lot of the opportunities that would seem to indicate a player that they have obvious plans for. After the draft, Mike Tomlin talked about him in the dimebacker role, but we haven’t really seen that. Perhaps we will in the final two preseason games. The article reads of his last performance:

A fifth-round draft pick out of Penn State a year ago, Allen mirrored his defensive back teammate Layne in bouncing back from a poor performance in the opening week of preseason action. He recorded a pass breakup in coverage and has now made five solo tackles this preseason with zero missed tackles.

He also forced a fumble. As for Layne, he was roughed up, particularly early on, in his preseason debut the week before. Due to injuries, he was asked to start, and he looked quite raw, but he was much more stable against the Kansas City Chiefs. The article says of his play:

After a rough first outing for the Steelers last week, third-round draft pick Justin Layne bounced back in their second game of the summer. On the field for 21 coverage snaps, he didn’t allow any receptions and had a pass breakup on two targets.

Layne is guaranteed a roster spot, although he may well be a weekly inactive as the number six cornerback with currently not versatility. It’s not clear where Allen currently stands relative to third-year veteran Jordan Dangerfield and Kelly for the final two safety spots, or if there is an outside possibility of them keeping five.

They did carry six into the season a year ago. They consistently had 11 defensive backs on the roster, starting with five cornerbacks and six safeties, but they signed Brian Allen from the practice squad after Nat Berhe was put on the Reserve/Injured List.