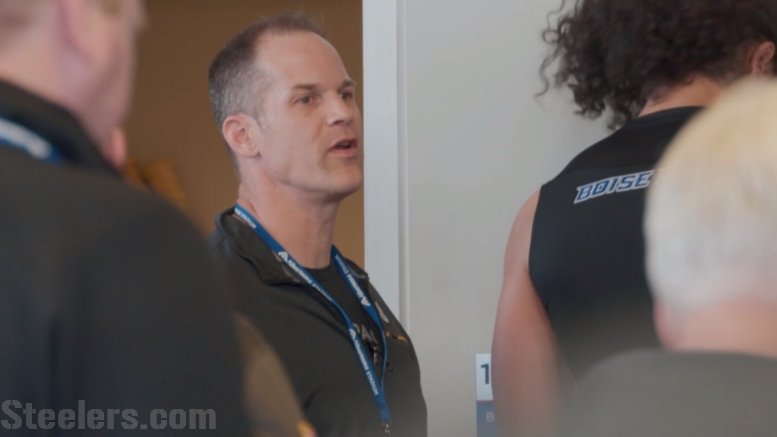 Officiating may not be a year-round job in the NFL’s eyes, but for the teams and their scouts, it is. And many people may not realize this, but while their focus is on evaluating the college prospects for the draft, attending live games to see them first-hand, they actually do the same thing for professionals as well.

This is something that Pittsburgh Steelers General Manager Kevin Colbert explained just a short time ago at the team’s Family Fest practice. The same regional scouts who go on the road and attend games to get a first-hand look at the college prospects will be spending the next few weeks doing the same at the NFL level.

“We’ll have a live scout at every preseason game for the first three weeks.”, Colbert said on Steelers Live. “And then they’ll also be starting their college scouting…it’s that time. They’re excited about it. But for this first month of August, they’ll be doing both pro and college”.

This is a process that they make use of pretty much every year, in some form or fashion. They might not necessarily claim a player off of waivers or sign him as part of their initial 53-man roster, as they did with Ross Cockrell a handful of years ago, but it also comes into play when they look to do August trades, like with Vance McDonald, Ryan Switzer, J.J. Wilcox, or Dashaun Phillips.

Even more especially, the team has been good to sign at least one or two players to their practice squad who were not a part of the 90-man roster, and those players obviously, generally, come from other team’s 90-man rosters. An example of that would be Trey Edmunds last year. Players currently with53-man roster history who originally came to the team in that manner are Alejandro Villanueva and Xavier Grimble. Mike Hilton would be another example, though he was signed months into the season already.

The beauty is, of course, that in most cases, these are players that these same scouts perhaps will have already evaluated when they were coming out of college in the first place. The team does have a history of acquiring players they were interested in pre-draft afterward, including Steven Nelson, and I believe Donte Moncrief as well, if memory serves, just from this year’s free agent class.

Teams like the Steelers want to build through the draft, but that doesn’t mean that the evaluation process ends once players enter the league. You’re not going to get every player you were interested during the draft or as college free agents. It pays to keep track of them as they pursue their professional career; and of course, the Steelers and every other team do just that.