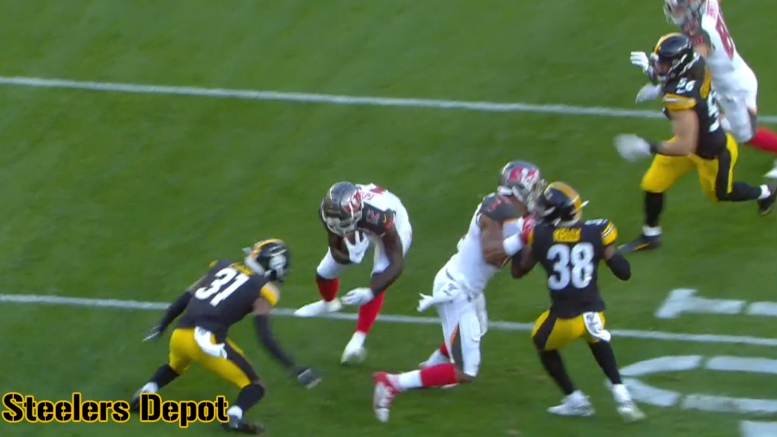 One thing that you have to give credit to rookie cornerback Justin Layne for is trying. The Pittsburgh Steelers third-round draft choice was dealing with an injury heading into the game, missing some practice time, and had to come out before the game to test himself to see if he could go.

With Joe Haden and Steven Nelson resting and Artie Burns and Brian Allen sitting out with injuries, it came down to Layne and Cameron Sutton starting, and Layne logged a ton of snaps. Unfortunately, the total body of work was not the prettiest that you might expect to see.

The two general themes that seemed to be pretty consistent in his performance throughout the game was a tendency to give too much of a cushion in coverage, routinely allowing the Tampa Bay Buccaneers offense to take what’s in front of them, and struggling to finish tackles. He missed two tackles on a pair of touchdowns, including on a screen pass on the opening drive.

The Buccaneers saw throughout their opening drive that Layne was playing off and that he had been having issues closing and finishing the tackle, so it’s no surprise that when they got down inside the nine-yard line, they ran the soft screen on his side. Once Kameron Kelly got picked off, the rookie cornerback was the only player with a shot at Chris Godwin, and he whiffed, allowing for an easy nine-yard score.

He had several bad snaps throughout the day such as that, essentially looking like a rookie who has only been playing cornerback for a few years, which is exactly what he is. But he also had some bright spots, and considering the fact that he is coming off an injury, perhaps there should be some forgiveness in how he performed, and how he was used as well.

Said the rookie after the game, “it felt good. At first I started off a little rocky, but I feel like I’m getting a little bit comfortable. I mean, we’re gonna see. I see what I need to work on. I made some plays, but I also missed some plays. That’s what the preseason’s for”.

Despite his rookie woes, that should not mean much for the Steelers’ secondary this year, as he is right now shaping up to be penciled in as the number six cornerback. Haden and Nelson will start, of course, with Mike Hilton in the slot, and Burns and Sutton are already battling for backup opportunities. This will be a redshirt year for Layne, and at this point it’s hard to imagine anything else.

Nevertheless, you want to see improvement from him as the games go on. Right now, he’s likely to spend much of the year as a healthy scratch at the rate things are going, but that’s not necessarily a bad thing for his development. As he said, we’re gonna see.