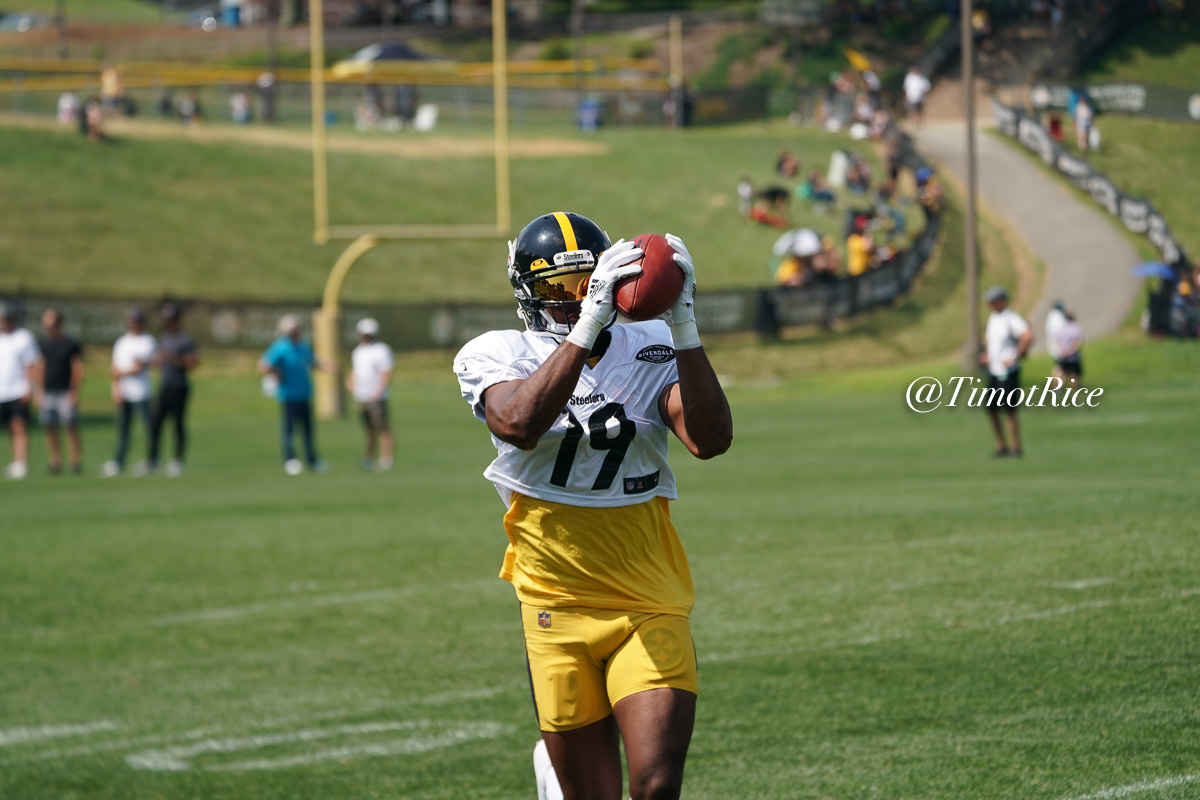 Third-year Pittsburgh Steelers wide receiver JuJu Smith-Schuster had two roles thrust upon him this offseason with the still-perplexing schism that arose between Antonio Brown and the organization that saw to his departure.

Not only is he taking on the responsibility of becoming the number one target for the offense, he, at 22, is also now the leader of the group in many ways. Even though the two wide receivers the Steelers have drafted since him are older than he is, Smith-Schuster is their veteran.

And he is trying to lead by example while getting better at the same time. Part of that is exactly what you might have seen yesterday while Michael Irvin was trying to interview him after practice for the NFL Network.

Smith-Schuster was hard at work on the JUGs machine while the Hall of Fame wide receiver was asking him questions and stating that he felt as a wide receiver that he never had to use it, that catching came naturally, and that his focus was on getting open.

“It’s every day after practice, man. I’m out here catching balls, about 300 balls a day, just getting my hands right, all different sorts of positions”, the young star told the Dallas Cowboys legend. “Just getting my catching balls up. Coach always told me, ‘you can never get enough balls in practice’, so you gotta come out here and get these in”.

That’s 300 extra balls. Every day after practice. Truth be told, he could use it. While he has shown the tendencies of an excellent receiver, he does still drop some passes, an area that can improve, and he has also had issues double-catching footballs, some of which would be dislodged as a result of the delay. So there’s no harm in getting better in this area, something he’s well aware of.

“For sure, man. It’s one of them things like, when you learn how to ride a bike, you want to keep practicing, practicing”, he said of the value of the exercise. “Whatever you want to do in life, you practice it until you master it. You can never get enough balls. I think catching a lot of balls [makes you] very confident in trusting your hands”.

Smith-Schuster is going to get plenty of balls in his third season. He was already averaging over 10 per game in 2018, and that was with Brown still on the roster seeing slightly more. Both of them were among the top five in targets, so with one gone, it’s quite possible he sees more targets than anybody else in the NFL this season.

That’s why he continues to take this no-nonsense approach to this, his biggest offseason of his young career. He is being put to the test to see if he can be the guy before the age of 23, expressing leadership over those who are older than him.

The best way to do that, to earn their respect, is to perform, at every opportunity. That’s not just putting up numbers in-game, but putting in the work on the practice field, too. 300 balls at a time.