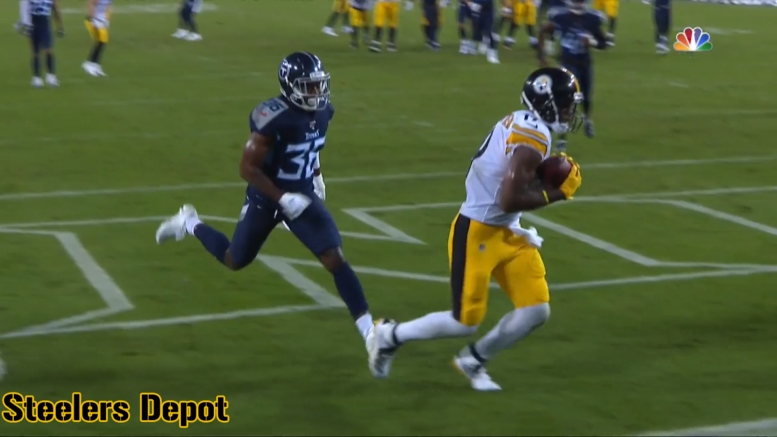 The Pittsburgh Steelers had a bit of trouble stringing first downs together on their first couple of offensive possessions last night against the Tennessee Titans. Their first drive stalled out after six plays following one third-down conversion. Their second drive lasted just four plays. So the execution of the no-huddle wasn’t a bit issue in terms of endurance.

But it did become a factor on their third drive, spanning nine plays over nearly five minutes. And according to JuJu Smith-Schuster, it resulted in him stealing a touchdown from James Washington—at least, in a sense.

“We were doing no-huddle, and I got tired”, he explained to reporters at his locker after the game, via the team’s website. “So I went out a couple plays, Ben got the first, then I had to go back in. James Washington, that was his play, that was his post. So I go in, I take his place, I take his touchdown, basically”.

He is referring to the 17-yard touchdown from Ben Roethlisberger, of course, on first and 10, the Steelers’ first and only snap from inside the red zone with their franchise quarterback on the field, his 19th and final snap of the preseason.

Smith-Schuster sat out a bit during that drive. He was targeted twice in a row on receptions of eight and six yards before checking out, the next two plays being running calls. Trey Edmunds converted on third and one from the 20-yard line to set them up at the 17 when Smith-Schuster checked back in.

But, Smith-Schuster says, he gave a touchdown right back. “A couple plays later, [Washington] scores his post. I’m supposed to start that series, but I said ‘no, you take it’, and he ends up getting a post, so”.

As mentioned, the touchdown to Smith-Schuster was Roethlisberger’s final play. Mason Rudolph started the next drive, but Smith-Schuster was supposed to continue to be out thee as well, ultimately deferring and allowing Washington to play. On the second play of that drive, the first passing attempt, Rudolph went deep and hit his former college teammate for a 41-yard score on the same post pattern, though obviously with more depth.

Smith-Schuster said that “it’s something we’ve been working on all week for the Titans”, and they were able to get a pair of first-half touchdowns off of that post pattern, perhaps a product of scouting and exploiting a weakness in their research.

For the second-year receiver, it was his ninth reception in three games, giving him 210 yards and two touchdowns, with three receptions of 40 or more yards. There’s hardly a thing he hasn’t done that was asked of him to show this offseason. The question is whether he can carry it into the regular season, and maybe steal a couple of touchdowns from Smith-Schuster.