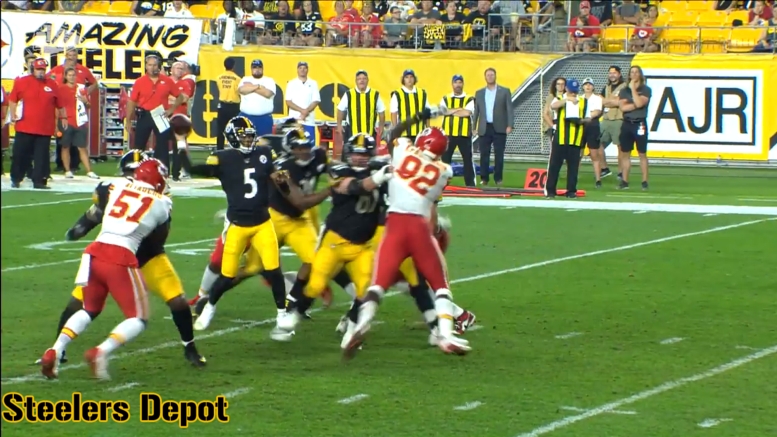 Fair or not, much of Joshua Dobbs’ preseason to date is being defined by one throw, that being the interception in the end zone targeting rookie wide receiver Diontae Johnson at the end of the first half. The interceptor ran halfway down the field before Dobbs himself had to fly in and make the tackle and prevent a 14-point swing.

The Pittsburgh Steelers’ third-year quarterback, as one would expect, placed the blame for the play on himself after the game, talking to reporters in the locker room. “We just had a drag route and I just missed him”, he said of the play, via the team’s website. “If I put it on him, he probably scores”.

Dobbs is battling Mason Rudolph for the right to be the active gameday backup quarterback behind Ben Roethlisberger, but there are those who also believe that he is fighting for a roster spot for the second year in a row, this time against rookie undrafted free agent Devlin Hodges, who has gotten significant snaps two weeks in a row now.

“It was a big play, could’ve been a big momentum building to go into the half, but that’s why you’ve just got to hit him and allow him to score a touchdown”, Dobbs said. “We’ll protect the ball better in the red zone and we’ll get it cleaned up”.

It was the first and only interception any of the Steelers’ quarterbacks have thrown so far in those two weeks, though the defense also hasn’t gotten any interceptions back yet. They piled up the interceptions in training camp (I believe Dobbs threw the most), so you want to see that change as well, but that’s another story.

If the defense isn’t getting turnovers, though, then it’s all the more imperative that the offense be able to protect the football, something Head Coach Mike Tomlin talked about following the game when asked about the three forced fumbles and recoveries by the defense. He noted that he was happy about that, but that they still had just a plus-one turnover margin, and also had a fumble and muffed punt on which they got favorable breaks to spare additional possible turnovers.

He did have two plays that could have gone for touchdowns. In the first game, he through a long ball high to James Washington, who caught the pass but was unable to keep the toes of his back foot inbounds. On Saturday, he through back-shoulder to Johnson on a play on which he scored, but it was ruled the receiver committed offensive pass interference. Last year, his receivers made plays for him and helped make him look better than he performed.