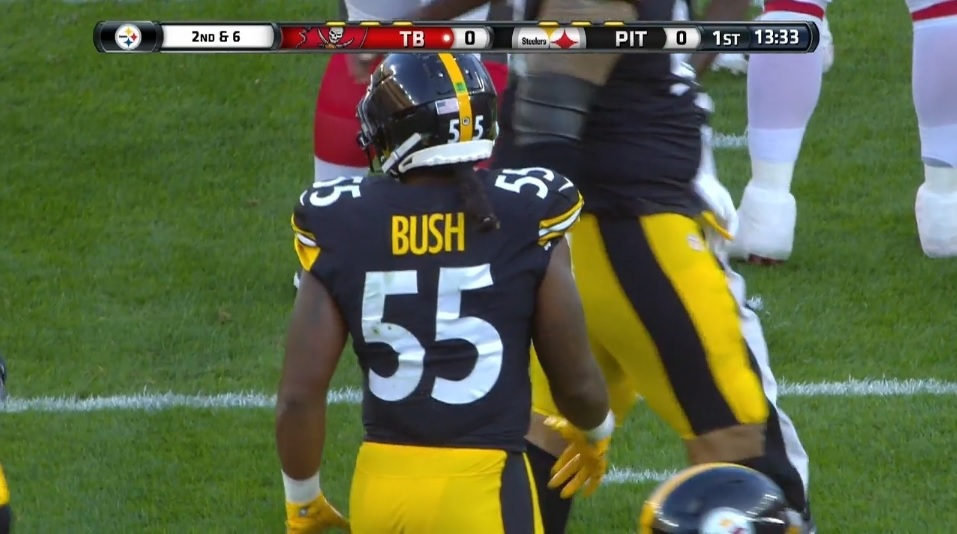 For one half Friday night, Devin Bush was everywhere. Stuffing the run up the middle? He made a crucial 4th down stop to get the Pittsburgh Steelers’ defense off the field. Running sideline-to-sideline? He flowed across the field. Drop back into coverage? A near pick-six (that would’ve been called back on penalty anyway).Bush finished yesterday with ten tackles, seven solo, and the biggest grin on the face of Steelers’ Nation.

So let’s dive into that debut and what made it such a success.

Here’s one of his most eye-popping play. Now, we don’t have access to All-22 film during the preseason (boo), and it’s possible the left tackle here got stepped on by a teammate. But it looks like Bush, who regardless of what happened, did a great job of taking on the block, runs over the linemen with 100 pounds on him. Doesn’t make the tackle but attempts to blow up the play and gets bodies on the ground, muddying up the run lane.

Another underrated play. Screen right. Bush is in zone coverage to defend this curl route by the tight end. But he’s keying the linemen, seeing them flow to the flat, and drives with them. Great job to work under the linemen pulling, not having to go above and then around, and has the athleticism to make it work, diving out and tripping the back to get in on the tackle.

If you’re say, Jon Bostic, and you try to run under it, you’re not reaching the back in time and now you’re trailing the play. So you have to go over and work through the trash which still puts the offense at the advantage. Bush is best of both worlds. Great play.

Now let’s watch Bush chase sideline-to-sideline. Bucs with a gap scheme to the perimeter. Bush keys the pullers, plays inside/out, and keeps himself clean as he works downhill. Finds the runner and beats him to his spot, where he wants to cut upfield, and makes the tackle as the back slips now trying to make a more drastic cut. Loss that sets up third down.

This should’ve been a pick six though would’ve been negated on a Tyson Alualu roughing the passer. But Bush shows his ability in coverage. Read the hip of the tight end, drive on the ball as the receiver makes his break, and he’s right there for the throw. Plays the route better than the TE.

The 4th down stop he and Ola Adeniyi teamed up on. Flies in to shoot the A gap, I’ve watched him do this at camp too, and makes the stop. Forced the back into Adeniyi’s arms. Defense gets off the field. Again, that’s just his athletic ability and speed to close on the ball that not every linebacker has. If you’re not there immediately on 4th and inches, as was the case here, the back is going to move the sticks. This is the element he brings to the defense.

A subtle one I like. You’re a rookie linebacker, it’s 3rd and 12. It’s easy to cheat, assume it’s going to be a pass, and get to your spot. And if it’s a run, you can come downhill and fill and odds are, the defense is still going to make the stop.

But Bush is patient and disciplined. He’s reading his keys here. No false steps, no assuming what the play is going to be. Low hat from the linemen tells him it’s going to be a run and he does well to stay clean, getting his arms extended to create space against the left guard (watch Bush fight him off with his left arm). Gets in on the tackle and again, defense gets off the field.

Steelers got a glimpse at everything Bush can bring to the table. Athleticism, physicality, angles, processing, and ability to finish. Just as importantly, Mike Tomlin praised his communication, a critical element we don’t get a good feel of. For him to be a three down linebacker, he’s going to have to wear the green dot, be the QB of the defense, so he’s on the right track there.

It’s fair to double down on what we’ve talked about since the first week of camp. It’s not a matter of if Devin Bush will play, or even start, come Week One. It’s a question of exactly how much he plays and who is playing the majority of the snaps next to him.