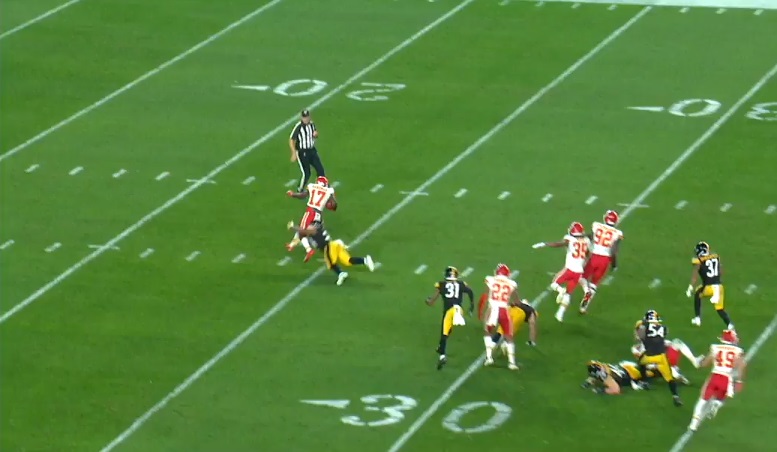 The Pittsburgh Steelers preseason finale Thursday night against the Carolina Panthers will include several young players attempting to make one last push at a potential final 53-man or practice squad spot. Making a splash on special teams Thursday night could go a long way in determining a roster spot or two and Steelers head coach Mike Tomlin has said as much not only in recent days, but as long as he’s been in Pittsburgh. With special teams play being that important, below is a look at and breakdown of the total snaps played by key positions in that phase of the game through the team’s first three preseason games.

Inside Linebackers: Ulysees Gilbert III (35) leads all linebackers in total special teams snaps played entering the team’s preseason finale and he looks to be in great shape to ultimately land on what might be nine total linebacker spots on this year’s 53-man roster. While fellow inside linebackers Robert Spillane (34) and Tegray Scales (32) are both right behind Gilbert in total special teams snaps played entering the preseason finale, both are extreme long-shots to make the 53, and the two might be battling it out to see which one lands on the practice squad, if indeed an inside linebacker is needed on that unit. While inside linebacker Tyler Matakevich (24) is down the list some, keep in mind that Steelers held him out on special teams in the preseason opener to give other young players a chance to show their skills. Matakevich has 36 total special teams tackles over the course of the last three seasons and thus will be tough for special teams coordinator Danny Smith to turn loose in the coming days. Vince Williams (1) missed the first two preseason games with a hamstring injury.

Outside Linebackers: Most want and expect rookie Tuzar Skipper (3) to make the 53-man roster this year due to his great play in the first three preseason games on the defensive side of the football. However, with skipper only playing three special teams snaps to date, that’s a big red flag. Those rooting for Skipper need to hope he gets a lot of burn on special teams Thursday night and makes a play or two in that phase of the game as well. If neither of those two things happen, it will be very tough for him to make the initial 53-man roster and thus he’ll likely land on the practice squad. Sutton Smith (15) made his preseason debut in the team’s third exhibition contest and played a ton of defensive and special teams snaps. Smith will likely get a lot more burn on special teams Thursday night and might even prevent Skipper from seeing time in that phase of the game. Anthony Chickillo (9) missed the team’s third preseason game with a chest injury and like Matakevich, was not asked to play on special teams in the exhibition opener. Even if Chickillo sits again Thursday night with his injury, he’s still likely to stick on the 53-man roster as the team’s third outside linebacker and core special teams player. Olasunkanmi Adeniyi (14) has missed all but the preseason opener due to a torn meniscus. He won’t play Thursday night and his status for Week 1 is still unclear. All his snaps came in the preseason opener. Jayrone Elliott (2) is a newcomer and not likely to stick in Pittsburgh past Saturday.

Cornerbacks: Rookie Justin Layne (42) and veteran Artie Burns (19) are poised to have decent-sized special teams roles in 2019. Both look like they’ll be the starting gunners on punt coverage for starters. Layne is obviously making the Steelers 53-man roster, regardless, and it looks like Burns is a lock right now as well. Cameron Sutton (15) and Mike Hilton (10) are also roster locks while Trevon Mathis (6) is hoping to land on the practice squad.

Safeties: One of the Steelers biggest remaining roster spot battles entering their preseason finale might just be between Jordan Dangerfield (24) and Marcus Allen (28). While the total of special teams snaps played to date by those two safeties is close, let the record show that Dangerfield was given the opener off in that phase of the game due to his previous resume. P.J. Locke (23), Dravon Askew-Henry (10) and Marcelis Branch are hoping to get practice squad consideration at this point. Kameron Kelly (14) looks to have a spot on the 53-man roster locked up at this point behind starters Terrell Edmunds (4) and Sean Davis (5).

Tight Ends: While Kevin Rader (31) leads this position group in total special teams snaps played, he’s still an extreme long shot to be kept around in any capacity past Saturday. Xavier Grimble (23) should be a lock and the jury is out on rookie fifth-round draft pick Zach Gentry (7) entering the team’s preseason finale. Gentry missed one game with an injury. Christian Scotland Williamson (0) has missed the team’s previous two preseason games and looks like he’s headed back to the practice squad with the International Pathway Program exemption. Poor Trevor Wood has yet to see any special teams snaps during the preseason.

Wide Receivers: Johnny Holton (29) has played a lot on special teams and likely needs the team to move on from Eli Rogers (0) if he’s to make the 53-man roster. Holton is at his best as a gunner and kickoff coverage player. Diontae Spencer (13) has made a few splashes via returns, but with that noted, the Steelers seem like they fully intend to stick with Ryan Switzer (9) as their returner. Spencer’s size makes him a returner only as far as special teams goes. He needs to take one or two to the house Thursday night to give him a shot at sticking on the roster past Saturday. At best, one of Tevin Jones (21) and Trey Griffey (10) will stick on the practice squad this year. James Washington (12) is obviously a lock as is rookie Diontae Johnson (3), who might get a shot again as returner Thursday night.

Running Backs: Can rookie running back Benny Snell Jr. (25) make another impact on special teams Thursday night in the team’s preseason finale? If he can and if he stays healthy doing so, that might be enough to keep Trey Edmunds (37) off the roster. Snell didn’t play in the previous preseason game due to injury, but he should be ready to go Thursday night. Edmunds value to the Steelers is more so on special teams than as a running back. Jaylen Samuels (31) is of course a lock while Travon McMillan (6) and Malik Williams (2) both aren’t likely to stick around in any capacity past Saturday evening.

Fullbacks: Yeah, Roosevelt Nix (24) is as safe as safe can be and better not be asked to play Thursday night. 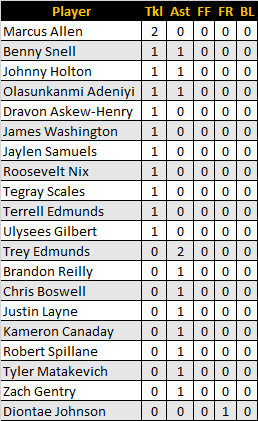