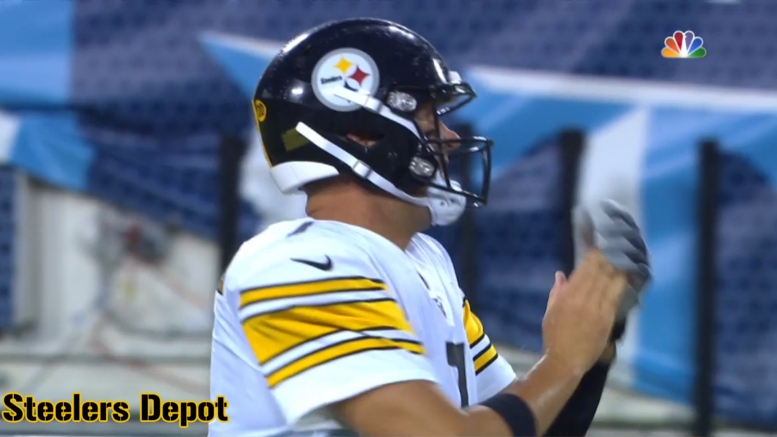 Pittsburgh Steelers quarterback Ben Roethlisberger doesn’t get a lot of work during the preseason, which has been bliss for his backups, Mason Rudolph and Joshua Dobbs, who have needed those reps and have, for the most part, taken advantage of them throughout the offseason process and into the preseason exhibitions.

The starter’s reps this time around didn’t even amount to the same as last year. I believe Roethlisberger saw in the ballpark of 25 snaps in 2018, playing five minutes into the second quarter, but this time he barely lasted 10 minutes, spanning 19 snaps over three drives.

That culminated in a nine-play, 58-yard scoring drive on which he connected with JuJu Smith-Schuster for a 17-yard score, but in his work prior to that, he acknowledged after the game that he was off the mark at times, the offense stalling out on the first couple of drives and giving Jordan Berry some work.

“I missed a couple throws the first couple series”, he told Mike Prisuta in the locker room. “That’s on me. I’ve got to make throws. But we got it going on the third series. They went into a zero [coverage] on the last play, and we just happened to call a good play, and JuJu got his eyes around. I threw it early and trusted he was going to be in the right spot”.

Roethlisberger also credited his offensive line for picking up an extra blitzer on the play, saying that they brought one more that they could block, which likely also factored into his decision to get the ball out quicker than necessary. But with Smith-Schuster in one-on-one coverage and with room to work, it really looked like a bit of pitch and catch.

The biggest key, however, was the fact that he didn’t take a hit, let alone a sack. While he got the ball out quickly by design, the offensive line, finally playing with all the starting participants in tow, played up to its usual high standards, really keeping all of their quarterbacks clean on the night, those Joshua Dobbs had to scramble a few times.

Roethlisberger completed his first two passes on the night, both short releases to Donte Moncrief, but he misfired on a ball behind the line of scrimmage to Ryan Switzer on the third throw, clapping his hands in disappointment knowing that he missed. But his tight end, Vance McDonald, did him no favors with a drop one play later. He would miss to Eli Rogers on third and four on the final play of the second drive, off on a ball to Smith-Schuster earlier as well.