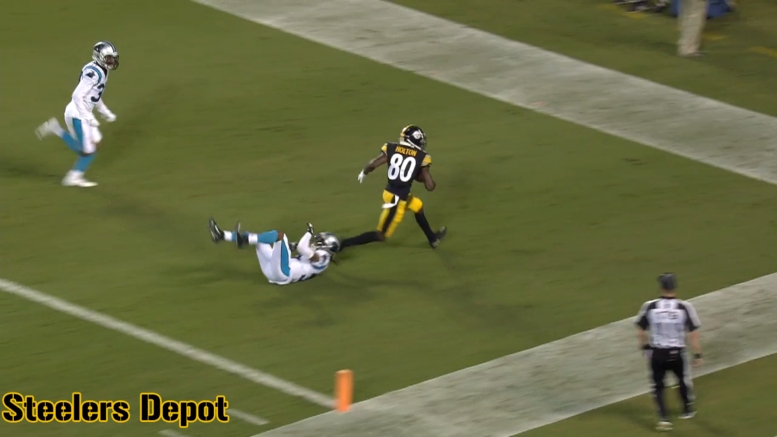 Short of Tuzar Skipper, perhaps nobody stated a better case for themselves to make the 53-man roster during the final preseason game than did veteran wide receiver Johnny Holton, who recorded two explosive plays, one of them for a score, on three receptions totaling 88 yards.

While he didn’t lock himself into a roster spot, many are now predicting that he will make the cut, and we already know that he is capable of contributing in other areas of the game as well, namely special teams. Not only is he return-capable, he also works other areas of special teams, particularly as a gunner on the punt coverage team.

Is it possible that he becomes to new Darrius Heyward-Bey, with perhaps a little more upside on offense and a little less ability on special teams? For the moment, assuming he makes the roster, he could still have a difficult time dressing depending upon the team’s view of the readiness of rookie wide receiver Diontae Johnson.

JuJu Smith-Schuster, Donte Moncrief, and James Washington are all the must-dress players. Johnson is an option to dress, but it wouldn’t be a stunner if he begins the year as a healthy scratch. Many are working under the assumption that Ryan Switzer will also make the team and that he will be their returner in all phases once again, as he was last year, which would mean that he has to dress.

For all this to be relevant, Holton does have to make the team, but his performance in the final preseason game really vaulted himself into the discussion. I believe he was the only wide receiver other than Washington on the roster to have at least three explosive plays during the preseason, and that is something we saw in training camp as well.

Also helping his cause is that Eli Rogers didn’t really do a lot. The fact that the Steelers gave him a chance to return a punt in the final preseason game is a bit scary for any Rogers fan, because that seems to suggest that he is on the bubble, even on the outside looking, after four years in the organization.