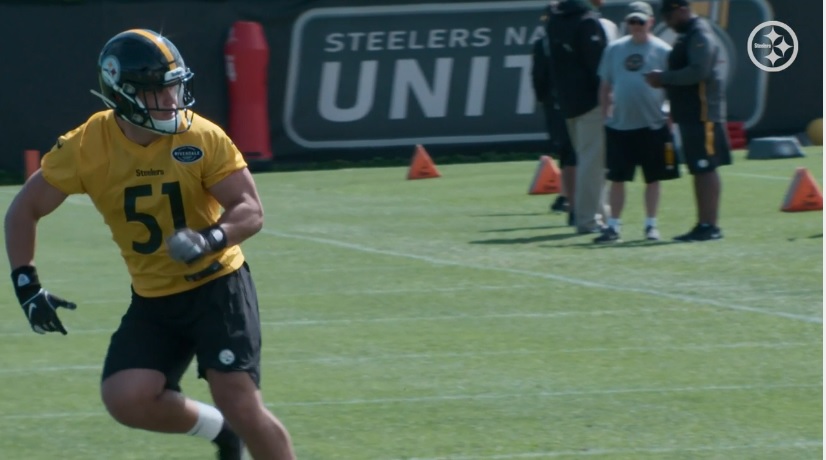 It’s a bad sign if we don’t have any quality images of you once training camp starts. It means that you haven’t been around much, and almost definitely didn’t participate in the preseason. While rookie sixth-round pick Sutton Smith did return to practice yesterday, he is still behind the eight-ball, even if he got a bit of a boost yesterday.

That is because the Steelers, in a somewhat surprising move, elected to waive first-year outside linebacker J.T. Jones. Jones had been working as essentially the number five player at the position through the summer, behind the immediate starters and then Anthony Chickillo and Olasunkanmi Adeniyi with the second group.

The team perhaps felt that Jones had little chance of making the team even though he had shown reasonably well, since they already have four players set that the position, and also like what they have seen from rookie Tuzar Skipper, and Smith’s return gives them three full lines to work with.

But even with Jones’ departure, Smith had a lot of ground to cover to make up. It’s imperative that he plays in tomorrow’s preseason game, and plays well, which includes the component of special teams. Because special teams will still be his ticket to making the 53-man roster.

Currently, fellow rookie sixth-round pick Ulysees Gilbert III appears to be in the driver’s seat for the ninth linebacker spot, and there may not be room for a 10th. Realistically, he may more likely be competing for a spot on the practice squad, and he will be challenged by Skipper for that position, though it’s possible that both could make it.

Mike Tomlin talked just recently about how Smith was falling behind because of the practice time that he has already missed, and that is time he can’t really make up as a rookie. But the only thing he can control is what happens from this point forward, and that is what must be his focus.

Even though I’ve written that Smith’s stock is down, that is an overall evaluation. He is currently trending upward after getting back out on the practice field and seeing one of his competitors at his position waived.