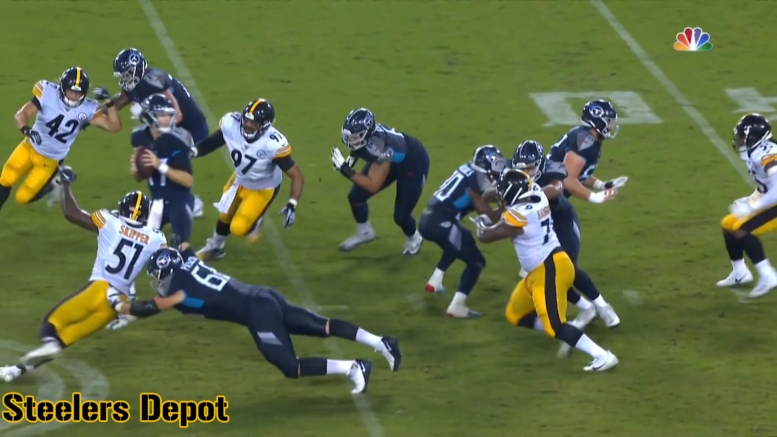 A day after being signed to the practice squad, Sutton Smith, originally a 2019 sixth-round pick by the Steelers, was released. He pocketed something like $8,000 for the one-day excursion, but that may be small consolation for a player who had told reporters he felt a sense of relief when Pittsburgh brought him back.

What likely consoled him, however, is what the coaches told him when they informed him he was being released. My guess is that we haven’t seen the last of Smith. With both James Conner taking a step back and Trey Edmunds still not practicing due to a rib injury, the Steelers needed to bring in another running back for practice. The only healthy running backs are Jaylen Samuels and rookie undrafted free agent Tony Brooks-James.

Once the running back position gets healthy, hopefully in a week or two, I’m rather confident that Smith will be re-signed to the practice squad to serve as the team’s number five outside linebacker, the first four being on the 53-man roster.

Smith, out of Northern Illinois, had an injury-riddled offseason that left him with little opportunity to push for a roster spot, but even still, the dominant preseason performance of rookie undrafted free agent Tuzar Skipper meant that it was never likely he would make it anyway.

Yet there Skipper sits on the New York Giants’ practice squad. Is there still a possibility that they will look his way again when the running backs get healthy and they can let some of these guys go? Or will they be content with Smith—possibly even call him up to the 53-man roster when they release Brooks-James?

Obviously, this is a question that will take a week or two to answer, but rest assured, at some point in the near future, they are going to add another outside linebacker to the mix, and Smith has as good a chance of it being him once again as anybody. They wouldn’t have signed him for no reason; his release was necessitated by the health circumstances at another position, so once that variable dissipates, he’ll likely receive another call.