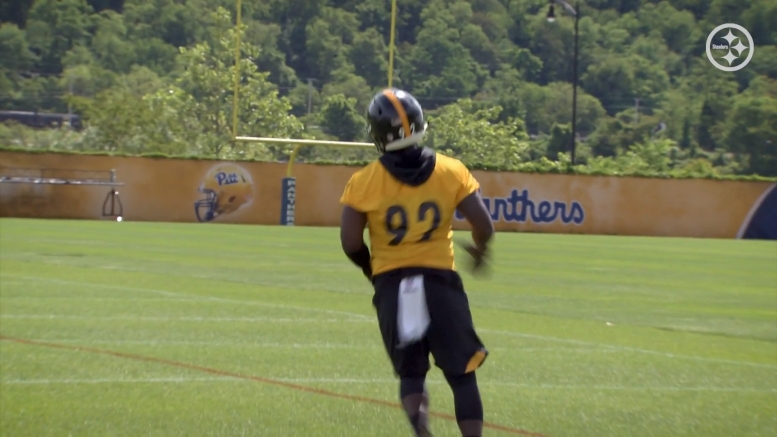 This is an obvious one that I’ve been waiting to get to, and I’m glad that I did, because now a week into training camp we have gotten, I think, about as good a read as we are going to get on second-year outside linebacker Ola Adeniyi before we see him inside of a stadium.

Of particular interest is the fact that he got the opportunity over the past two days to line up with the first-team defense, meaning that instead of primarily working up against Jerald Hawkins, he was instead battling a higher level of competition in Matt Feiler.

Based on Alex Kozora’s daily training camp recaps, it sounds as though it took him about a day or so to adjust to it, but he had more success yesterday, which is a good thing to see. One thing worth noting is that Adeniyi’s bull rush was less effective against Feiler, but the lineman is known in his room to be the strongest of the group, so that’s not a shock. His nickname is The Anchor, after all.

In general, however, this past week has been incredibly positive for the 2018 college free agent, who is looking to make the jump into a contributor in year two after he spent most of his rookie season on injured reserve and got scarcely a chance to play.

His teammates and coaches have been noticing, as have the beat writers. He has shown legitimate potential as a pass rusher that is getting people excited. He has an arsenal in his pass rushing repertoire to select from, and he is still working through the process of best putting it all together. For now, he has mainly functioned off of instinct.

Still, the challenges ahead of him will include showing that he can play on special teams, because that is something that is going to be asked of him as a linebacker who isn’t starting (and yes, I know you think he should be starting over ‘Dud’ Dupree, you don’t have to remind me for the 100th time).