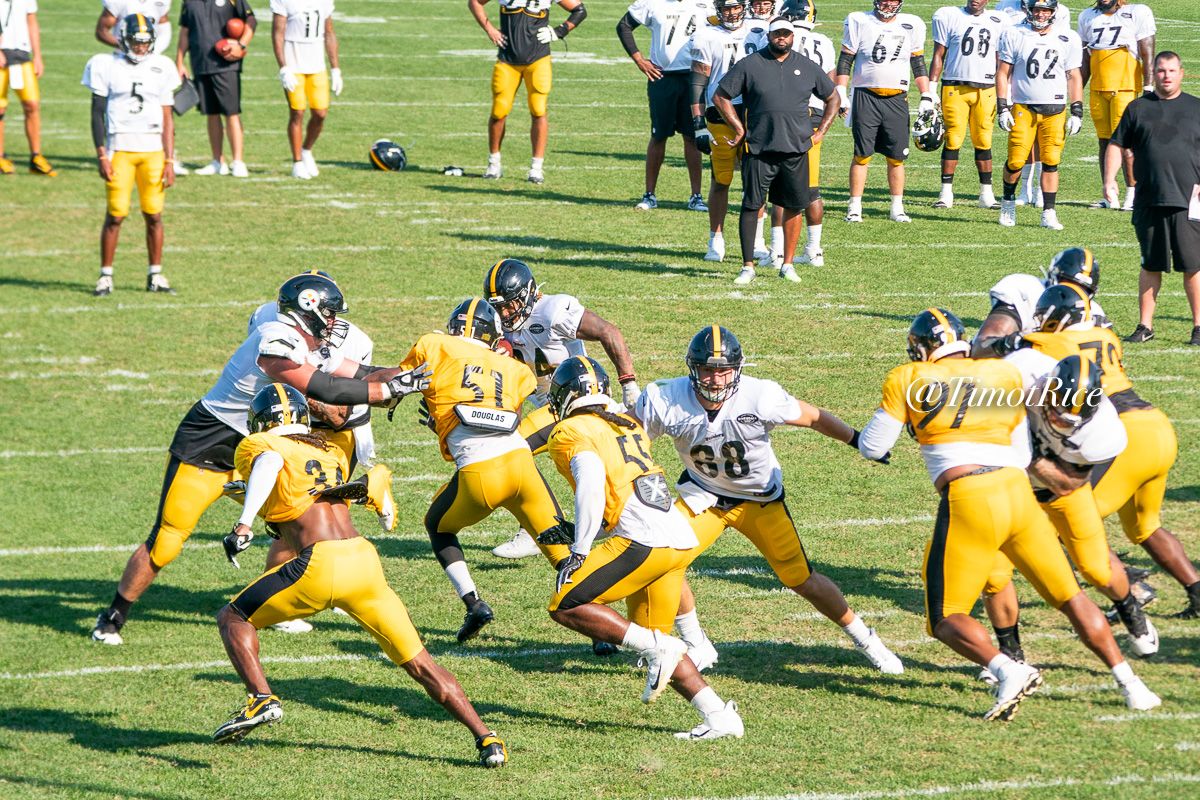 Close the book on the 2019 Pittsburgh Steelers training camp. 14 practices behind us and now it’s time to start looking back on what we’ve learned the last three weeks. Let’s start with the biggest overview of camp. Those who performed well in camp, the winners, and those who didn’t, the losers. There’s still time to players to ascend and descend, the preseason is far from over, and it might seem harsh to call someone a “loser” from just these settings. But the NFL is a competition and that’s how things get judged.

Devlin Hodges – It’s hard to believe we’re talking about a #4 QB as much as we are but Hodges is anything but your typical 4th stringer. But we identified him as having legit talent prior to camp and he’s followed through. He’s become a fan favorite and though his future is uncertain, blame the nature of the position, but the talent is there. He shows a live arm, willingness to chuck it deep, while still making smart decisions, getting the ball out quick, and conquering every challenge they threw his way.

Consider this. Despite all the focus that is deservedly on Mason Rudolph and Josh Dobbs, figuring out the #2 spot, Hodges has worked his way into the conversation and taken some of those reps away. He won’t be the #2, obviously, but can he make the team? It’d come at Dobbs’ expense but yes, it’s possible, and I wouldn’t hate the idea of carrying Hodges as the #4 on the practice squad. Rare as that is.

JuJu Smith-Schuster – It’s easy to overlook the obvious stars of camp but I did want to include a short note on JuJu. Really strong camp for him. He and Ben Roethlisberger haven’t missed a beat and there’s every indication, even though we have to see it in the regular season, he’ll have no issue being the #1 receiver this year. He also participated in every practice, soaking up reps and building even more of a rapport with Big Ben (who was excellent too, if you’re wondering. You’re probably not).

Zach Banner/Fred Johnson – Lumping these two together since they’re on here for similar reasons. Banner has his weight under control and routinely looked good in team and one-on-one drills. He’s a good enough athlete to function in space and uses his size and length to his advantage in run blocking and pass pro. His camp should be good enough to make the roster.

Johnson’s versatility was impressive. He logged team snaps at every position sans center, though you should never want to see him play tackle (especially left tackle) without saying a couple Hail Mary’s first. Johnson is another big body along the interior in the mold of Matt Feiler. He shows the strength to anchor in pass protection even when he gets uprighted by bull rushes. Not a lock but I like his odds of being the #9 offensive linemen on the 53.

Isaiah Buggs – Some sleepers might have been unearthed in the back of the draft. Buggs is one of them. Excellent and varied hand use, good bust off the ball, and played well in the preseason game against the Bucs, creating space in the run game to identify, stack, and shed, and has good hips to split gaps and create pressure. He may the backup to Cam Heyward and Stephon Tuitt this time next year. A near-lock to make the 53 and someone I’m geeked to watch the rest of the preseason.

Ola Adeniyi/Tuzar Skipper – Two Toledo kids making noise along the edge. Adeniyi was the star of camp the first week (maybe a slight fade at the end of camp). Dude couldn’t be blocked. He’s definitely making the team. Now it’s just a question of how many defensive snaps he’ll see. If the Steelers are smart, that number will be above zero. Though no, he’s not starting over Bud Dupree. Skipper is unlikely to land on the 53 but plays with heavy hands that creates power on his punch. Should make the practice squad with a real opportunity next year if Bud Dupree and Anthony Chickillo are no longer Steelers.

Devin Bush – Bush is as advertised. No longer is it a question of if he’ll play this year or even the first month of the year. It’s a question of how much. And odds are, the answer to that is “A. Lot.” He flashed all the traits that compelled the team to move up for him. Speed, physicality, range, and he seems to have shown the ability to communicate at the NFL level too. Good conditioning too. Missed only one practice, Wednesday’s, and that injury was minor. Bush was back in the lineup for the camp finale.

Appears he’s going to start and be the lone LB on the field in dime packages.

Ulysees Gilbert III – Flashed early and emerged late. He stood out in his debut performance against the Buccaneers. Combination of range, better processing, and ability to make plays at the catch point. Consistent standout in the one on one coverage drills vs backs and tight ends, a drill heavily slanted in favor of the offense. Certainly made the case for the 53 man roster. So far, tackling’s been solid too.

Cam Sutton – Sutton’s role may not have changed significantly, though he appears to be the odds on favorite for the starting dime role, but this was definitely the best camp he’s ever had. He tied for the team lead with three interceptions. The numbers don’t even do it justice. Sutton was always around the ball and his run defense seemed to improve too. Not a physically imposing tackler due to his frame but active and had the ability to cut bigger backs, like Benny Snell, to the ground. One benefit of every Steelers RB being a big guy, 5’10 and 215+. DBs learn how to be impactful tacklers. Hopefully he’s has earned the full trust of the coaching staff. Big year for him and so far, so good.

Artie Burns – It is a “typical Artie Burns camp” and him playing well is no surprise. But that type of play has seemed to solidify his roster spot especially after the team gave him his $800K roster bonus. He’ll make the team as the final corner though I expect him to be ahead of Justin Layne and will probably be the top backup at both outside corner spots unless Cam Sutton jumps in front. Burns will be active while Layne will probably being the season in sweats.

Terrell Edmunds – Edmunds is one of those sophomore players making a serious jump in Year Two. And it makes sense. He played a lot more than what the team intended last year but is benefiting from all those reps now. Last year, he was supposed to be a senior in college. Now, he’s NFL-ready physically and mentally. He’s shown a high level of conditioning. All those factors have allowed him to become a much quicker processor and now play to the athleticism that got him drafted. Hoping for a big year from him. Think you’re going to see it.

Kameron Kelly – Kelly carried over his spring buzz into a strong summer. He soaked up a ton of opportunity, often returning first team with Sean Davis missing a good chunk of camp due to a dislocated finger. Opportunistic, he repeatedly made plays on the football, including an interception in seven shots. He’s poised to be the backup FS behind Davis while offering some slot corner versatility. He’s probably the #3 there, behind Mike Hilton and Sutton, but it’s nice to have in case of emergency.

Chris Boswell – 27/29. That’s what I have Boswell down for throughout camp (I don’t have the kicks from Day Two logged, though my notes say he “did well,” for whatever that’s worth). That’s 93%. Just a “camp” number but a spectacular one nonetheless. Internal competitor Matthew Wright went just 21/27, 77.8%. We’ll see what the regular season holds, kickers truly are unpredictable, but Boz is on track to be the team’s starting kicker in 2019.

Chukwuma Okorafor – Fewer losers and less notable players. I also want to avoid “punching down” on back end of the roster players who expectedly struggled. Okorafor figured to give Matt Feiler a push for the starting RT spot but Feiler opened up as the starter and never looked back. This was much less of a competition than I hoped for. Feiler, to his credit, did have an excellent camp.

Okorafor also struggled in the preseason opener, struggling with his hand placement and generating power on his punch. He’ll be the swing man and 6th offensive linemen this year, so he’ll play a little bit, but he failed to take the jump I hoped for.

Jerald Hawkins – Hawkins got a little better at the end of camp but it was still tough sledding for him. Health and rust are all fair to question with him, coming off a torn quad and not participating in a padded practice since the end of the 2017 season. He got whooped by pretty much every pass rusher in camp. With the fierce competition along the offensive line, Hawkins is outside-looking-in. He’s probably not the trade candidate I hoped he would be either though if his level of play can continue to climb the rest of the way, maybe I’ll sing a different tune. Long ways to go before that conversation though. Sucks to have him on this side of the list because he’s a good dude, a hard worker, and an awesome spirit, but that’s not always enough to win at this level.

Lavon Hooks – Tabbed as something of a preseason sleeper, his time in Pittsburgh may be up. Hooks is a wide body who can clog the run and done well enough to stick around for what feels like forever, but with Buggs’ emergence and Hooks not showing anything as a pass rusher, he’ll have to settle for practice squad at best. I’m liking Henry Mondeaux’s chances of making it over him.

Sutton Smith – Smith had a decent start to camp and flashed a few times but faded and then missed a chunk of camp with some sort of muscle/hip injury. The emergence of Ulysees Gilbert III and Tuzar Skipper is making life extra tough on Smith. Hopefully he’ll be able to play tomorrow, it looks like he will, though we’ll see how a lack of practice reps hinders his play. Many thought he’d make the 53 man roster. Now, he’s just trying to secure a spot on the practice squad. Got only one day at FB too with the injuries he fought through.

Marcus Allen – I didn’t think there was any scenario where Allen would not be on the roster prior to camp. Now? Not only can I buy it, I believe it. By camp’s end, he was demoted to third team opposite UDFA PJ Locke and didn’t make many impactful plays, sans one interception mid-way through camp. Another second year guy who hasn’t made the jump. Kelly is a good bet to make the team, Jordan Dangerfield offers more special teams value, and there’s a puncher’s chance they bring in somebody outside the organization. Bad recipe for Allen’s chances to stick.