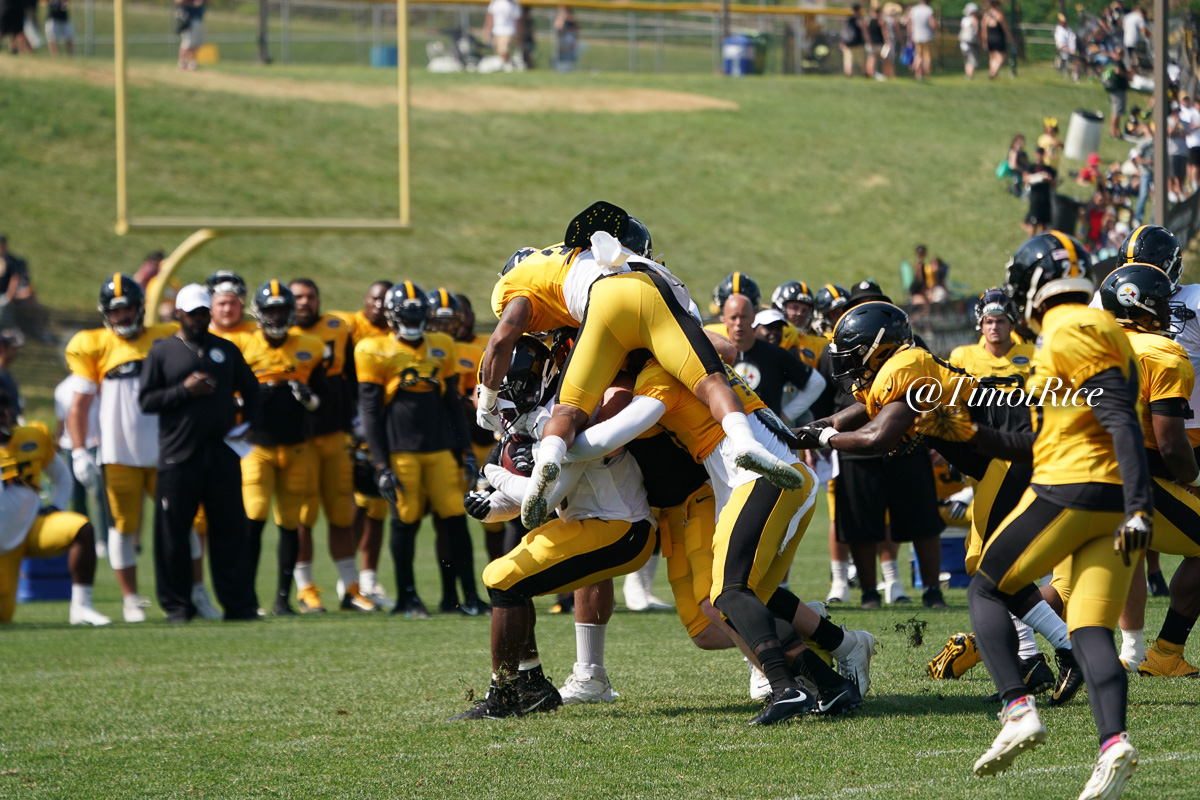 Day six of training camp is already here. Time is flying, isn’t it? Here’s what I’m looking for during Thursday’s practice.

– Mason Rudolph is off to a nice start. The one thing I want to see? Him drive the football downfield. Take a chance, air it out. Been a little conservative with the ball, which has value and is good for not making mistakes, but you gotta be able to chunk the ball too sometimes.

– Should be a half-day for Ben Roethlisberger too. Lots of chances for Rudolph and Josh Dobbs to soak up reps. Dobbs must improve his short and intermediate level accuracy. Last two days have been better but still not good enough.

– Like what the group has done. Benny Snell, Ralph Webb, and Malik Williams have been the most impressive of the three. Williams is a good athlete with speed to turn the corner and lateral agility to make defenders miss in the hole and get YAC. Webb has been a little quieter lately but ripped off some good runs while Snell has shown a well-rounded game as a receiver, runner, and blocker.

– Will Sutton Smith continue working at fullback? Seems like he’ll dabble at it but we’ll see how often they let him work there. Getting work there has value, the more hats you can wear, the better, but it does take away from some of his reps as an outside linebacker.

– Zach Gentry had his issues as a blocker. Needs to work on hand placement and leverage to be able to sustain his blocks. Christian Scotland-Williamson has improved but I still want to see him get involved more as a receiver. Only two catches so far, neither going for very far. Kevin Rader might be a decent blocker but his hands have been poor, especially on throws over his head.

– Diontae Johnson has perked up a bit and shown YAC ability, I want to see him make a play downfield. Most of his receptions have been between 2 and 10 yards and even the longer runs have been largely run after catch. Playing the X receiver involves plenty of the quick game but you have to win vertically too or corners will just jam and sit at the LOS and take away the three step game.

– Agree with Kevin Colbert. RT Matt Feiler has looked rock solid and doesn’t look like he’s going to give away the right tackle job anytime soon. Chukwuma Okorafor is doing fine but it’s difficult to envision the Steelers rocking the boat with their starting five.

– Two LSU linemen who have struggled a lot. Jerald Hawkins has looked super rusty and a guy who has missed the last year of football. Garrett Brumfield is trying to show some flexibility playing center but lacks power, length, and the balance to stay off the ground. Right now, and I don’t know how good the odds really even are, I like Zach Banner’s chances of making the 53 more than I do Hawkins.

– Couple of good outings from Isaiah Buggs. Quick off the ball with hand use to knock down the blocker’s hands and defeat the block. Does a nice job eating up space so when he sheds the block, he gets past without the linemen being able to reengage.

– Daniel McCullers keeps playing like he’s going to make the team. I’m glad they’re not doing the same strange maneuver last year and playing him over Javon Hargrave but McCullers is comfortably on the inside right now. Showing power and more tenacity.

– Good group. JT Jones flashes speed and bend, Tuzar Skipper has power and heavy hands. Ola Adeniyi may get another day against Feiler. Let’s see if he can make more headway than what he did yesterday afternoon.

– Want to take a longer look at Devin Bush versus the run, just to see where he’s at. What he’s shown in coverage has been positive but the run game was the bigger issue of the two facets of his game coming out of Michigan.

– Ulysees Gilbert III is playing well and someone who should be receiving more reps. Get him above someone like Robert Spillane. Don’t like that he’s stuck with the third team. This guy has the talent to make the roster.

– Quieter day from them yesterday. Steven Nelson has been fine, better than probably what social media leads you to believe, but there hasn’t been much splash from him. A big play, interception or even a breakup, would be kinda nice.

– Some injuries here may give a guy like Justin Layne more reps. Could see someone like Joe Haden get a day off soon and Herb Waters suffered a shoulder injury yesterday. Layne could take advantage. Lines are getting a little short at cornerback. Roster move coming? Think there’s only seven healthy corners if you exclude Waters.

– Could one of the safeties move to slot corner if a roster move isn’t made? Dravon Askew-Henry saw a rep or two there late in Wednesday’s practice.

– Kameron Kelly has an opportunity but he’s gotta grab it. Show open field range. Be able to cover the sidelines from the deep half, rally to break a throw up over the middle.

– PJ Locke? Show up in those run sessions, my man. You can hit. Let me hear it. Felt like he’s made more plays in coverage than against the run which isn’t terrible but not what I expected.