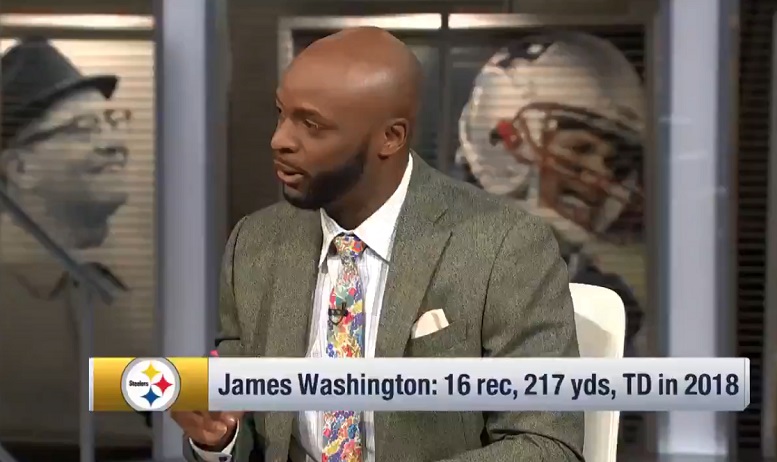 Last week, former NFL wide receiver Reggie Wayne, who is now an analyst for the NFL Network, named Pittsburgh Steelers wide receiver James Washington as a top breakout player at his position for the 2019 season. On Monday, Wayne once again talked about how he expects Washington to have a great second season in the NFL with the Steelers and how he even expects him to be the number two wide receiver in the offense.

“Well, he should, Wayne said Monday on Total Access when asked to confirm that he thinks Washington will be the Steelers number two wide receiver in 2019. “I mean, that’s why two drafts ago they picked him in the second round with the 68th pick. Right? This is another year under his system where he can learn to be a professional. Also another year where he can learn that offense and get on the same page with Big Ben. Right? We saw little glimpses of what he can do towards the end of the season last year. Man, the last three games he had 129 yards total and now that’s being a third receiver in that receiving group because obviously A.B. [Antonio Brown] was number one and JuJu [Smith-Schuster] was number two.”

While I’m also bullish on Washington in 2019 after he caught just 16 passes for 217 yards and a touchdown during his 2018 rookie season, it’s hard to agree with Wayne’s assessment that the Oklahoma State product will be the Steelers number two wide receiver in 2019. Washington is once again expected to play the Z position in 2019 in three or more wide receiver personal packages with JuJu Smith-Schuster mainly playing in the slot and newcomer Donte Moncrief mainly playing the X position, the same position that former wide receiver Antonio Brown had played. That means that whenever the Steelers utilize less than three wide receiver personnel groupings in 2019 that Washington isn’t likely to be on the field as it will likely be Smith-Schuster out wide at the Z and either Moncrief or rookie Diontae Johnson playing opposite him.

Washington doesn’t necessarily need to be the Steelers number two wide receiver in 2019 to have a breakout year, however. In fact, if can catch 35 to 40 passes for 650 to 750 yards with about 3 or more touchdowns, such stats should be considered quite acceptable based on his expected amount of playing time and times he’ll be targeted. To hear Wayne talk about Washington, it sounds like he’s expecting the second-year wide receiver to catch 60 to 70 passes in 2019 and I just cant see that happening barring a few injuries to other wide receivers. His best season in college was his final one when he caught 74 passes for 1,549 yards and 13 touchdowns and it’s impossible to imagine him posting those kind of stats as a Z receiver with the Steelers.

Regardless of what i think Washington’s stats might be in 2019, both Wayne and myself expect him to have a much better second season with the Steelers.

“But he has all the potential in the world to be a big-time receiver in this league,” Wayne said Monday of Washington. “And just history with the Pittsburgh Steelers shows that they know how to grab receivers and bring them into that system and get them to flourish the best. I mean, you can go through a list of names and see those guys come in and as one guy leaves, another guy steps up and makes big plays. So, right there in itself, I feel like James Washington can get it done.”

Here’s to Wayne being even more right about Washington than me.