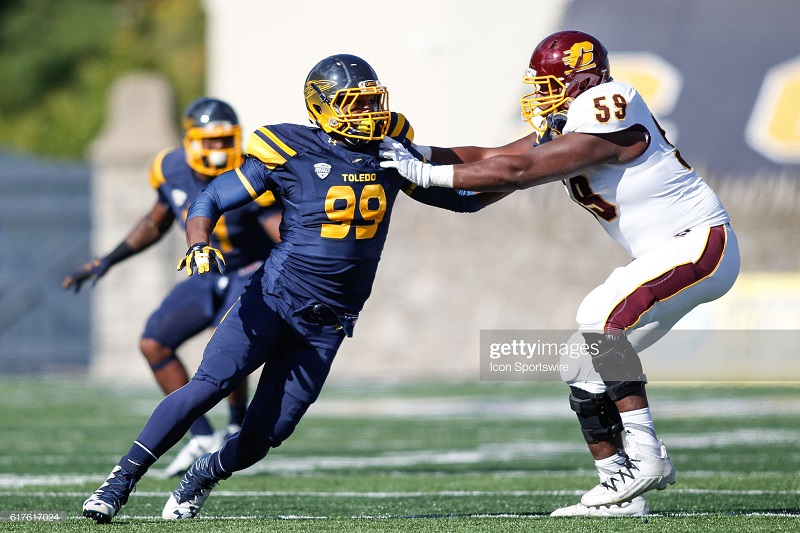 Skipper will be one of the Pittsburgh Steelers’ outside linebackers reporting to training camp this Thursday. But in a way, it’s almost hard to believe he’s part of that group. The odds of any athlete making it into the NFL are incredibly slim. Factor in Skipper’s path to get here and he might be one in a million.

He moved around plenty growing up. There were three high schools, multiple foster parents and by the time he arrived at Norwich Free Academy in Connecticut, he was in a group home. It wasn’t until his current foster family took him in that he was finally provided the stability every child should have.

“They were the ones who got me outside the group home my senior year,” Skipper said in an interview with me last week. “So my last six months [of high school] they helped me graduate. They gave me a home instead of living in the group home. They’ve just been with me ever since through my long journey. JUCO, D1 to now.”

Grades not good enough to get into a D1 school, he spent two years at a JUCO, Monroe College in New York, where he picked up his associates degree. Leaving there, he had offers from multiple schools but settled on Toledo, convinced to call it his new home after visiting the campus. He was the first recruit of head coach Jason Candle.

He spent 2016 as a backup, seeing only occasional time on defense. 2017, his senior year, was supposed to be the big season. Skipper won the starting job opposite Ola Adeniyi. They were the 999 club. Adeniyi wore 9, Skipper 99. But that opportunity was cut short early into the year. On the opening kickoff in Week 3 against Tulsa, Skipper tore his ACL. You can see him at the top of the screen, his knee stuck in the ground trying to avoid the blocker. Somehow, he was able to jog off the field. His season was over.

“It was supposed to be a big senior year,” he said of that season. “Just a little setback for a major comeback.”

Skipper credits Coach Candle for helping him get through the year. He was granted a medical hardship waiver from the NCAA, allowing him to return for an extra year in 2018.

“[Coach Candle] was just like, ‘don’t worry, we still got faith in you. I know it’s going to be a long process but just trust it. Trust the process. We’re going to be right here waiting for you to return.’ Him saying that put a little ease in my mind knowing alright, I won’t be forgotten about.”

2018 would be the breakout year. He made third team All-MAC, led Toledo with 8.5 sacks, and scored one touchdown as the Rockets finished with a winning record and bowl berth.

Draft weekend was quiet. Disappointing? Sure. But not a surprise. His agent told Skipper to be realistic. Although one team phoned to tell Skipper to be “on the lookout” during Day Three, it was always likely he wasn’t going to hear his name called that weekend. There wasn’t a contract waiting for him after the draft either.

Instead, there were two initial offers. A CFL tryout and invite from the Kansas City Chiefs to participate in their rookie minicamp. He attended both but neither stuck. On the final day of Chiefs’ camp, he walked back to his locker and saw two messages on his phone.

“The last day, after coming back to the locker room the last practice my agent was like, when you see this message call me ASAP. And then I had another message saying this was [area scout Dan Colbert] from the Pittsburgh Steelers, can you give me a call. I gave them a call and they said they want to invite me to rookie minicamp.”

With the tryout invite, his NFL door was still open. But Skipper was on his third camp in a week. Fatigue was high, physically and mentally. The travel, the practices, learning playbooks, schemes, trying to digest all that information while showing what he can offer a team on the field. He saw it as just a small price to pay to live his dream.

After day three of Steelers’ camp, it was again Dan Colbert approaching him.

“Dan Colbert just came to me and was like ‘Tuzar Skipper?’, I was like yes sir, he was like, ‘congratulations, we want to sign you.’ That was one of the best days of my life.”

Skipper was one of five tryout players signed out of minicamp. His first call? His foster mom. To wish her a Happy Mother’s Day and share the news.

He isn’t quite sure exactly what he did that earned him his roster spot. There wasn’t one standout moment like others have had (WR Marcus Tucker once cited a diving catch as the one that literally “caught his contract”). But he believes his attitude, on and off the field, along with his play sold the team.

“Just show them I’m here, this is what I want, I’m trying to get better, all I care about is getting better. Yeah I made a mistake but I’m here to fix that mistake. I’m just ready to get better. I don’t know, maybe it was just the off field attitude as well as the on field attitude. They were probably like, ‘this is a guy we like.'”

Mike Tomlin has already had an impact on him. It’s hard not to. Skipper appreciated how accessible Tomlin’s been, “you won’t turn a corner without seeing him,” and the respect the head coach has shown every player from superstar to UDFA.

And Tomlin, as he annually preaches to the media, made a big deal out of how players need to spend their time following mincamp. The mantra of “being in great shape” isn’t just lip service. It’s practically an order.

Now it’s about making noise in training camp. Reporting Thursday won’t be his first time at St. Vincent College. Rookies are taken over a few weeks in advance to get a feel for the campus. The tour guide? Player Engagement Coordinator Terry Cousin, a man known by few outside the Steelers’ building (unless you recall his playing days) but the MVP for new faces in the locker room.

Once Skipper takes the field each practice, he has one clear goal.

“I’m just trying to prove I can ball…I don’t want them second guessing signing me.”

He’ll be one of three ex-Toledo players on the roster, joining Adeniyi and rookie receiver Diontae Johnson. Skipper noted personality differences between each guy but spoke highly of both players.

“Diontae is a good guy. He’s a little quiet. You won’t hear too much from them but you’ll see a lot of plays being made. Ola, you’ll hear from him and there will be a lot of plays made from him as well. Those two are total opposites with personalities. One a talker, one isn’t a talker, but they’re both good guys. There’s nothing negative to say about them, all positive, all love towards them, and I’m just happy to be part of the organization with them.”

Skipper’s now part of the NFL. And you can expect him to take full advantage of the opportunity.