The Pittsburgh Steelers offense certainly has undergone quite a bit of change these past two seasons and included in that is the complete departure this offseason of two thirds of the team’s triplets, Ben Roethlisberger, Antonio Brown and Le’Veon Bell, now being on other teams. With Brown and Bell both now gone for good, running back James Conner and wide receiver JuJu Smith-Schuster now join Roethlisberger to make up the new version of the Steelers triplets. How those three players perform in 2019 will indeed play a huge part in how good or bad the team’s overall offense performs.

Recently, Ali Bhanpuri of NFL.com took on the tough task of ranking the top triplets (quarterback, running back and pass catcher) of all 32 NFL teams just ahead of training camps around the league getting underway and he has the Steelers aforementioned trio of Roethlisberger, Conner and Smith-Schuster ranked 11th overall.

Bhanpuri’s ranking method is based off of a point system and laid that all out in his Wednesday post on the topic. You can read the summary of that below.

I ranked each team’s top running back and pass catcher 1-32, assigning them points commensurate with their placement. For example, Ezekiel Elliott netted the Cowboys 32 points for being the No. 1-ranked RB, and Saquon Barkley earned the Giants 31 points for being No. 2. However, to put my own spin on this exercise, I analyzed all 32 QBs by two different metrics: 1) whom I would want in 2019 for one game; and 2) projected 2019 production. To give extra weight to the game’s most important position, I then multiplied each team’s combined QB score by 1.5. Add up all three position totals for each team, and you get the ranking below.

In an effort to make these rankings a little easier to see and understand, I have tabled all of them below.

As previously noted, Bhanpuri’s ranking scoring method resulted in the Steelers’ triplets being ranked 11th overall and with a total score of 106.5. With the quarterback rankings carrying a higher weight, Roethlisberger being ranked 10th, 9th and 12th in the three respective categories obviously factored in pretty big into the Steelers overall score. The fact that Bhanpuri has Cleveland Browns quarterback Baker Mayfield ranked ahead of Roethlisberger in two of the three categories is quite amusing and I really don’t see how that is justified. Personally, I think that Roethlisberger being ranked lower than seventh overall in any of three categories is quite ridiculous and that’s even with me accounting for the offseason loss of Brown.

While I can somewhat live with Bhanpuri ranking Conner 12th overall in running backs, I think Smith-Schuster should be slightly higher than 15th in the pass catcher rankings. I find it hard to believe that Bhanpuri really has A.J. Green and Brandin Cooks both ranked higher than Smith-Schuster.

Bhanpuri’s rankings are of course subjective and the same goes for my own opinions of his offering. That said, the Steelers do have all three of their triplets ranked 15th overall or higher and a few teams that are ahead of them in the overall rankings can’t say the same. If Bhanpuri had given Roethlisberger the respect he deserves and ranked Smith-Schuster a few spots higher, the Steelers triplets would have easily cracked the top 10. 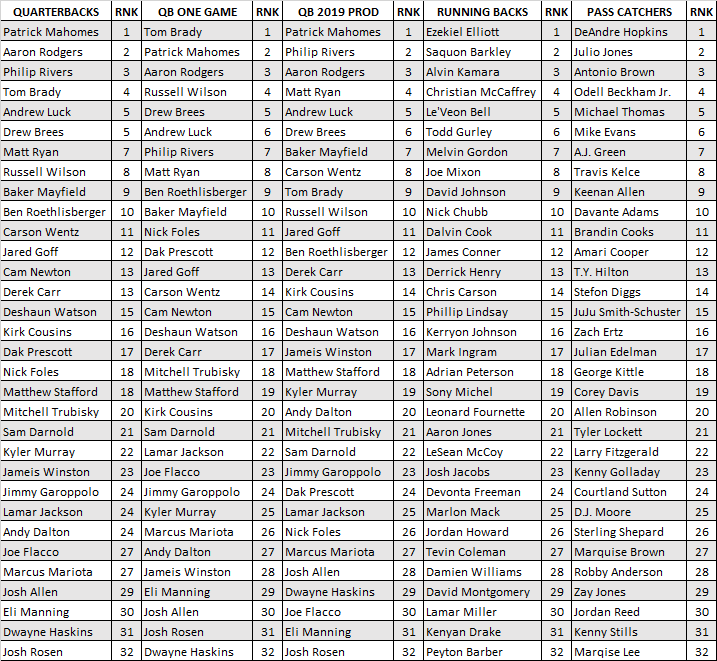