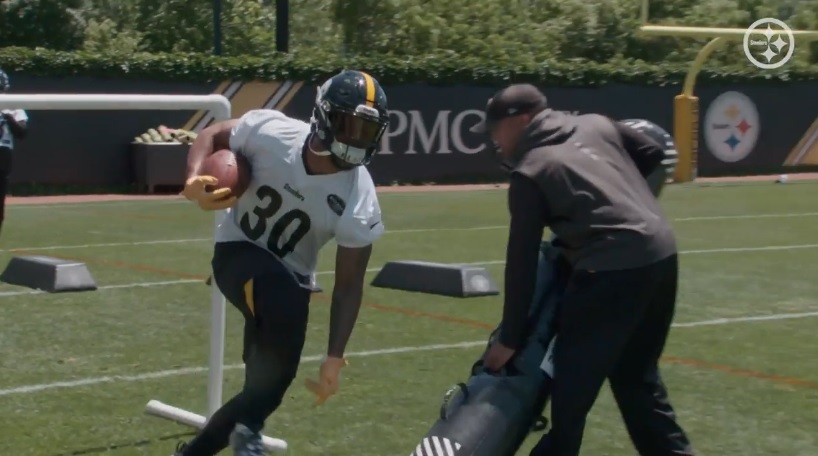 On Thursday, Alex Kozora posted a few comparison pictures of Pittsburgh Steelers running back James Conner and they illustrate the body transformation he’s made since coming out of college. This past offseason, Conner, who had a tremendous 2018 season, his first as a starter for the Steelers, shared several videos of his workouts in South Florida and those workouts have resulted in him looking very chiseled entering this year’s training camp. After arriving at Saint Vincent College on Thursday, Conner was immediately asked to describe how he feels mentally and physically ahead of his third NFL season.

James Conner at his 2017 Pro Day vs Conner this offseason. Cancer free and able to focus 100% on football, totally transformed his body. He's in for a big season. #Steelers pic.twitter.com/V86yoKQZHk

“You just trust your work,” Conner said. “I put in some great work this summer. So, you know, just here to make plays and just be around the guys and you know, just chase greatness with the whole team.”

While Conner was known to most people in Pittsburgh prior to being drafted due to him playing his college football at the local University, he didn’t really become recognized league-wide until last season when he produced nearly 1,500 yards from scrimmage and scored 13 touchdowns. That great 2018 season resulted in him being voted to his first Pro Bowl as well. On Thursday, Conner was asked if it’s any different for him this year now that he’s proven himself to be an NFL commodity.

When Steelers head coach Mike Tomlin held his press conference on Thursday he was asked to comment on what Conner said about nothing he did last year being able to help him this season. On top of that request, Tomlin was also asked to reveal what the Steelers coaching staff was able to take away from Conner’s performance last season and how does the team go about leaning on him as their go-to running back moving forward.

“I agree with what he said,” Tomlin said. “I’m not looking for comfort relative to what he did a year ago. I do find comfort in what I’ve seen from him through this point in the journey this year. He’s highly conditioned and focused. I see the natural growth and maturation that you see in a professional. And I like what I’ve seen from him through the OTAs and so forth. And opportunities to run across him this summer. I mean, look at him, he’s ready to go.”

Conner figures to be the Steelers bell cow running back again this season. But even so, Conner might get a little more relief in 2019 than he did in 2018 as not only do the Steelers have Jaylen Samuels now in his second season as a backup, the team also selected running back Benny Snell Jr. out of Kentucky in the fourth-round of this year’s draft. With the Steelers seemingly having adequate depth at the running back position this year and combined with the fact that the offense will need to go through some adjustments at the wide receiver position this year due to the offseason loss of Antonio Brown, Tomlin was asked Thursday it its now incumbent for the offense to rely more on the running game early this coming season and if the better depth at running back will help aid in that.

“You know we always have a desire to have a competitive and capable run game,” Tomlin said. “That has not changed and will not. And other capable emerging players like the ones that you mentioned provide depth and insulates us through circumstance. Got to acknowledge we lost a little something when James went down a year ago, although Jaylen did emerge in some instances. So, I like the added depth and competition.There’s always going to be an emphasis on development of our play in that area. I just believe it’s just an element of us being the type of team that we need to be.”