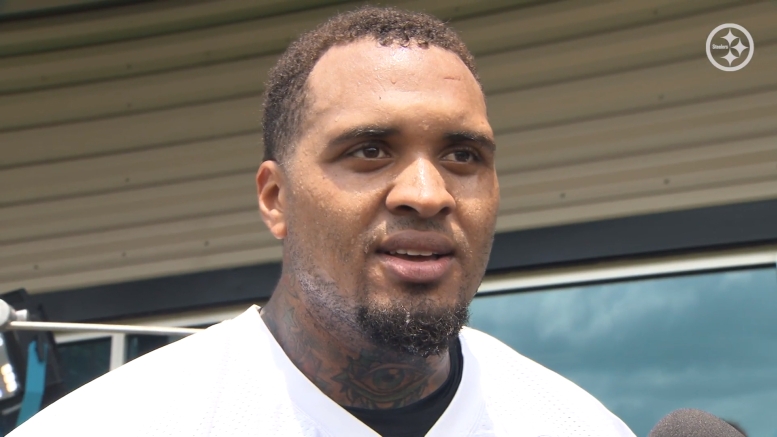 The first day of training camp has finally arrived for the Pittsburgh Steelers but the atmosphere and environment seems to be very different than years prior. The practice field is being used for football and not as a helicopter landing pad, any whispers of contract holdouts have also vanished as the Steelers get back to what they do best – playing football.

Center Maurkice Pouncey arrived to Latrobe earlier this morning and the veteran offensive lineman was asked if he had a different feeling entering camp this year.

“I always feel the same, get that anxious feeling, wondering what day one is going to be like, what all the guys have done in the offseason but this is an exciting time when football gets back and if you really love it then you love being here,” said Pouncey, per Teresa Varley of Steelers.com.

While certainly everyone at Steelers’ camp enjoys the game of football, many likely grew tired of the off-field theatrics from years prior. Pouncey may very well have been one of them but the 30-year old centre was asked if a quiet offseason has allowed the team to come into camp with a different feeling.

“Definitely, I mean its just been a fun offseason. We haven’t had a lot of stories in the media and that’s usually a good thing.”

Pouncey is correct, the Steelers have enjoyed a quiet offseason since the departures of Antonio Brown and Le’Veon Bell. The drama-free environment has allowed the Steelers to come into camp with an eagerness to get back to work and reconnect with teammates.

“Everyone’s just excited to be back and to get around each other again. You don’t know how much you miss it until you’re not here, you go into the off season to get around your family and your kids and get away from the teammates , man, and you sit there and it drives you crazy thinking about what they’re doing and wanting to get around them and getting better and working out with them. So, this is the time to do it man. I know everyone’s going to be excited to be back and so are we.”

While the Steelers enter Latrobe a more solidified unit, Pouncey has heard the lingering chatter about his team’s outlook for the 2019 season. Only a few pundits are buying into the Steelers as being Super Bowl contenders but Pouncey is not buying into that as he feels the Steelers have a lot to prove this season as they play the underdogs not only in the AFC North behind the resurgent Cleveland Browns but also in the NFL.

“Not a lot of people are saying we’re going to be good and I don’t know I always like being the underdog, man. Ever since I’ve been playing football, we’ve always been underdogs so maybe that’s the best way to be,” Pouncey said via 93.7 The Fan.

Pouncey: “Not a lot of people are saying that we’re going to be good. I always like being the underdog.” #Steelers @937theFan pic.twitter.com/bUdyGxjpsq

The Steelers may enter training camp as an almost forgotten team coming out of the AFC. Missing the post season and trading away one of the most talented players in the league is not a typical path to success but lost in the quiet nature of this offseason was the Steelers’ rehabilitation of their locker room.

While the outside world may not get a glimpse at it until the 2019 regular season kicks off, Pouncey and the rest of the Steelers can feel a change in direction in their locker room as they set out to prove that culture beats strategy every time.