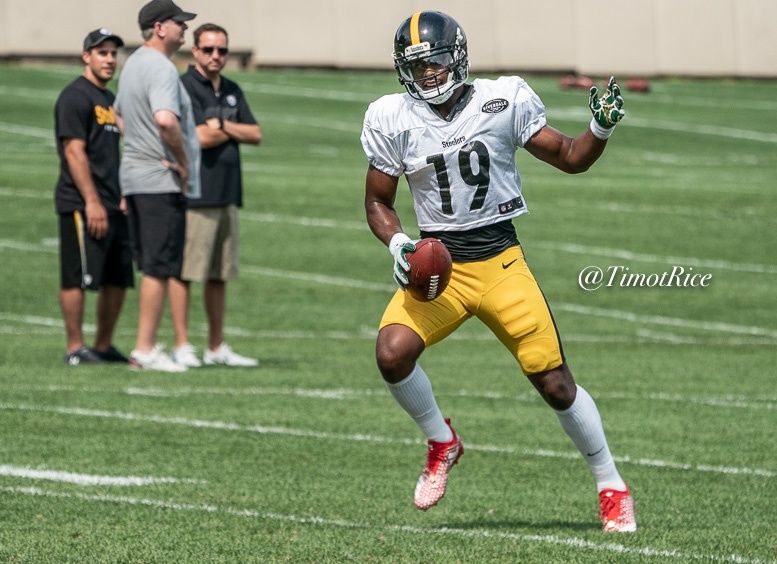 Finishing the skill positions with the wide receivers.

JuJu Smith-Schuster: His challenge will be handling the role of the bonafide #1 receiver, though much of that test won’t start until the regular season. But the challenge we issued to him was to become one of the leaders in the locker room. Donte Moncrief does seem to be asserting himself well into that spot which definitely helps. From an on-field standpoint, there isn’t a ton to discuss here. I do want to see his continued improvement as an outside receiver, being able to separate against bigger corners with less space to work in.

We’ll see if he gets any additional work as the X receiver too. He’s not going to start there but with Antonio Brown gone, you could see guys get moved around a little more. That’d be pretty new for JuJu.

James Washington: X factor of the offense and heck, arguably the entire team. The weird thing with him is even a good camp doesn’t guarantee regular season success. Washington tore it up the second half of camp and throughout the preseason before falling on his face when the games counted. So it’s hard to say a similar August is going to absolutely convince me he’s made the jump.

Looking for him to get off to a fast start in camp. Win jump-ball situations. Win vertical. Play a little faster, looser, with more comfort like you’d expect someone in their second year in the league. Needs to avoid stacking bad plays. Mistakes are going to happen, he’s not going to do everything, but you want to see him immediately bounce back from the inevitable bad moment. He didn’t do well enough there as a rookie.

Donte Moncrief: All about developing chemistry with Ben Roethlisberger. He’s the new face here expected to have an immediate role. Separation wasn’t a strong suit of his in his previous tape so I’m looking him to do a better job shaking man coverage since he’s pegged as the team’s X receiver. That’ll be critical. Quicker he gets up to speed on the field, the more authority he has, and the more effective leader he’s going to be as the most veteran NFL player in that locker room. In that sense, I’m looking for him to replace Darrius Heyward-Bey more than I am AB.

Diontae Johnson: The only rookie in the entire room. Kinda weird, isn’t it? No UDFAs, no other draft picks. That might make for a lonely feeling but it helps the WR room is still young overall (Johnson is actually older than JuJu). But he has the presence and background of someone more advanced in his football career. He’s quick-twitch, stems his routes well, and is able to create space really well. He’s also seen plenty of press coverage and moved around offenses, making for a quicker and easier – relatively speaking – transition than many rookie wideouts.

He got a lot of comps to AB and some of that is valid. Two areas where Johnson is miles away from Brown? His hands, focus will be key, looking in every ball, and his strength. He goes down too easily and I want to see him start adding muscle, which won’t happen in one season, I know, to be more effective after the catch.

While much of the discussion has been around playing receiver, expect him to log some work in the return game, too. Kicks and punts. It’s possible he earns a job there, too.

Ryan Switzer: His first training camp which will be nice for him. Be part of the team-building process instead of jumping onto the train as the season’s starting. I’d consider him “inside-looking-out,” meaning he has the inside track on a roster spot but isn’t the lock the names above him are. Hopefully we see how last season ended, used more of a vertical threat and “true” receiver as opposed to a RB/quick game player like he was used for the first 3/4 of last season.

Can he play on the outside at all? At the X spot? He got a few snaps there last season and has a skillset that can work there. That’ll help his case.

Will also return kicks and punts, of course. Though return work in the preseason is messy, it’s not something you can practice well in camp (it gets worked but always non-contact, not the same benefit as live drills for offense and defense), hopefully we can see a spark there. Especially as a kick returner.

Eli Rogers: His first camp in two years after missing all of last summer still recovering from a torn ACL. We’ve basically seen the height of his game, he’s a backup slot receiver with minor punt return value, but he probably will look better than he did last year after getting on the field late in the year. He’ll get to show up in true football shape and hit the ground running. Another guy I *think* will make the team but probably doesn’t have quite as good odds as Switzer, being limited to just punts hurts Rogers, and will have to have a strong preseason to lock his spot up.

Diontae Spencer: Spring “winner” looking to stick on the roster. I think he’ll turn some heads this summer. He’s shifty, fast, with return value and ability to win in space. Has to make some big plays in the return game and as a receiver. But he should get a chance to do kicks and punts with his experience there. Making the jump to the CFL is different, the NFL is a little less friendly for guys of his size, but he also knows how to be a professional, how to take care of his body, and make plays with everything on the line. Ball security will be critical though. Big plays don’t matter if you put the ball on the turf.

Johnny Holton: Interesting guy. Definitely a different type of player than Johnson, Switzer, Spencer, and Rogers. Think of him as new-age DHB. Big, fast, special teams value in the coverage game. He can make the team as a Justin Hunter type with more consistency and the ability to work as a gunner on the punt team. Those are things Switzer and Rogers can’t do. So there’s a path if he can make some splash and make tackles in the coverage game. Don’t sleep on him.

Tevin Jones: He and Trey Griffey are pretty similar dudes. Jones is the better athlete, lot more speed, but big-bodied receivers who can cover kicks and punts and play inside/out on offense. Jones will have to show those wheels and finish his camp strong. He faded down the stretch last year, maybe wore down a bit, so I want to see him get off to a better star.

Trey Griffey: Much of what I said about Jones is applicable to Griffey. The big difference is Griffey finished his camp much better after a very quiet start, getting work with the first-team near the end of camp. So he’s gotta do the opposite. Make noise and stand out in a crowded WR field from Day One. Needs to use that big frame of his to his advantage and win combative and contested situations. Impact play on special teams won’t hurt, either.