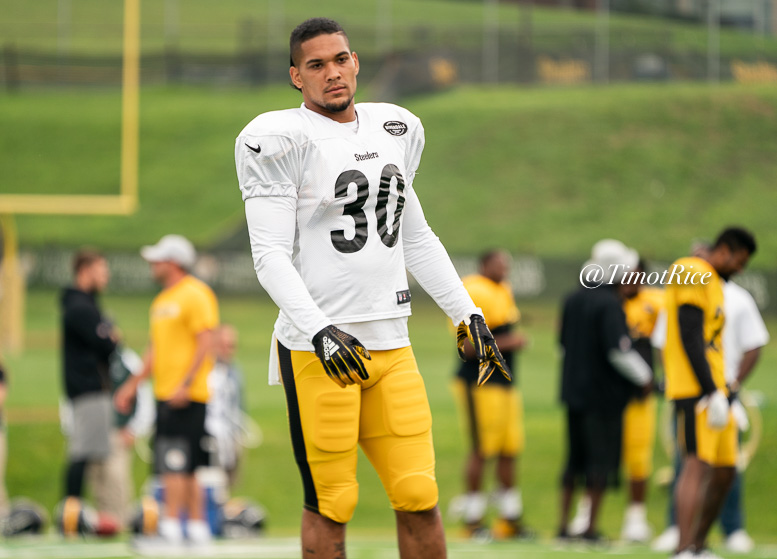 Moving on to the running backs.

James Conner: This is the first camp where Conner doesn’t have much to prove. And I hope the team doesn’t work him as hard in the preseason, saving his body a bit. The injuries he’s suffered, a torn MCL as a rookie and high ankle sprain last season, were pretty freak, but logging fewer carries this preseason can’t hurt his health. Right?

Last season showed a well-roundedness to his game. Someone scheme versatile, able to line up all over the formation, and showed himself well as a receiver and (mostly) in pass protection. Blitz recognition and pickup still needs some improvement but that’s not something you’re going to see a lot of in camp. Better tested during games when they start counting.

For him, it’s about staying healthy. And similar to JuJu Smith-Schuster, embracing a leadership role in the locker room. At receiver, they brought in a vet and professional like Donte Moncrief. Not the case at RB. Young group through and through, Conner tied for the oldest and by far the most experienced. Here are the career carries:

So everyone is 100% looking to Conner.

Jaylen Samuels: His plan, as has become common for sophomore backs, was to drop weight and add speed. We’ll have to see if he looks faster and more explosive than last year, when he was admittedly heavy and didn’t always show the burst needed to play in the backfield. That wasn’t all his fault. He didn’t exactly know where the NFL was going to play him, tight end, receiver, running back, some sort of hybrid, and plenty of rookies come in too heavy and realize the importance of speed after a year in the system. It’s the #1 I’m sure I’ll get asked about when it comes to him and it’s an important question/answer.

Pass protection will also be something to monitor. We’ll see a little of it in backs on ‘backers, which take place the 3rd practice (first in pads) and Friday Night Lights but in-game will be the marquee matchups come the preseason.

Benny Snell: Clean slate with him. Want him to prove his billing out of college, a power back with leg drive who can be effective in short-yard situations. The goal line drill they do near the end of camp will be a big moment for him, especially knowing he might be a little tired and worn down from the camp grind.

Beyond that, it’s hard to say what will happen and how things will go. You want to see him make plays in the open field. Win one-on-one against corners and safeties. Catch the ball cleanly out of the backfield on more difficult route concepts than what Kentucky asked him to run. And of course, ball security is the #1 thing that can get a rookie back sent to the doghouse.

Will he play special teams? Probably. To some extent, at least. He entered Kentucky as the “guy” so that’s going to be new as well.

Trey Edmunds: Edmunds received a little bit of buzz in the spring from ESPN’s Jeremy Fowler and he spent a few weeks on the roster, mostly playing on the punt block and kick coverage units. He has size, a trait the team clearly likes, with a little bit of NFL experience. The special teams value helps him stand out, too. This will be Edmunds’ first camp with the Steelers. Making the 53 is going to be tough sledding but if he can make some splash plays and an opening is created by injury, he could land back on. Or failing that, a practice squad.

Ralph Webb: Rest of these guys are rowing similar boats as Edmunds. Big guys, not much NFL production, a little bit of NFL experience. Webb earned some rare praise from Bill Belichick and was signed by the Steelers after Conner’s injury last year. Knowing there are so many good runners ahead of him on the roster, I’d look to Webb making a big impact on special teams as his path to the roster. Do something different than the rest to stand out, a different type of player.

Travon McMillan: Despite all the new faces in the backfield, five of seven backs are going through Latrobe for the first time, McMillan is one of just two rookies. Him and Benny Snell. McMillan, and I know I’m a broken record here but it’s the main point to make, is another big body. For rookies, ball security and pass protection are paramount so that’s where things begin with him. Everything else feels secondary right now.

Malik Williams: Williams was a part-time player in college who had a decent preseason a year ago with the Atlanta Falcons before being signed to a futures deal this offseason. Wide body type that will have to be able to move the pile and show leg drive on power runs and short-yardage situations. But his story is the same as the rest.

Roosevelt Nix: Despite the hubbub over Sutton Smith seeing time at fullback, by no means is Nix’s job in danger. Smith is for emergency, not an option to take anyone’s job. Nix will log his snaps, crack some skulls, and catch a couple checkdowns during camp. Not much needed to see from him at this point. We know who he is. A man very good at his job.