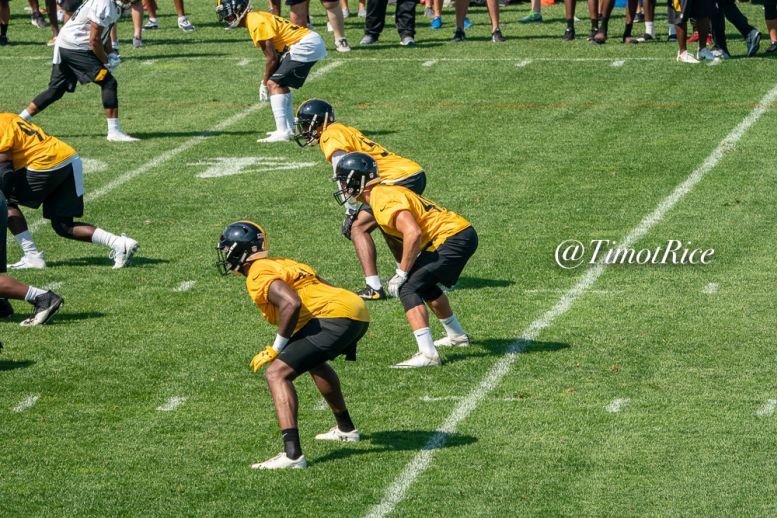 Let’s check out the inside linebackers, a key unit this year.

Vince Williams – While there are small areas for specific improvement in his game, you’re obviously not expecting him to make a major leap at this stage of his career. He doesn’t have to though, already offering down-to-down consistency and physicality Mike Tomlin wants in his linebackers. He’ll be counted on as a leader even more than before with new faces around him, even if Mark Barron is a vet.

Williams is also good for delivering those “welcome to the NFL” type moments in camp. Him and Jordan Dangerfield. So watch out Benny Snell. Know where 98 is at.

Mark Barron – Really interesting study. What is his role going to be? With the contract he got, he’s going to play. And in camp, just like last year (albeit with much less talent), there’s going to be a rotation with him, Williams, and Devin Bush. Reps where Barron/Williams are the 1st teamers, Barron/Bush rotate in the next day, just to get a feel for everyone’s skillset and how they work together.

Is Barron going to play in a sub-package role? That’s hard to see, at least if you’re talking about the safety/Morgan Burnett role, but camp will hopefully give us some information. Though to be clear, the Steelers don’t tend to run much dime in practices. Base 3-4 and nickel most of the time.

How well can he cover? He’s viewed as an athlete, and that’s partially true, but he struggled in man-to-man against tight ends down the seam. Gotta improve there to be trusted in nickel defense and passing downs, regardless of who starts.

Devin Bush – All eyes on him. First round pick and the Steelers traded up for him? A unicorn with this front office. Everything on the table with him. His athleticism, ability to sift through the trash, key the ball, and work sideline-to-sideline. How he handles taking on blocks. His hand use is going to be key. Being able to punch and disengage instead of going around the blocks, which can cause him to get pushed out of his gap and lose his fill.

Though I’m not really worried about his size, athleticism is so much more important these days, I’ll admit he looked a little small on the field during OTAs. But if he creates splash, none of that will matter. Hoping he snags a pick or two in team drills and he should look good in the 1v1 LB vs TE/RB drills. They heavily favor the offense but an athletic linebacker can definitely turn heads.

Tyler Matakevich – Not much to see from him though you can gladly anticipate him not seeing 1st team reps like he did a year ago, opening as the starter opposite Williams. Still think his spot is fairly secure given how excellent of a special teamer he is (tied for the 2nd most ST tackles in the NFL since 2016). He’ll just have to hope the Steelers value that enough to keep him on the roster. They should.

Ulysees Gilbert III – Don’t want to count him out entirely. Sutton Smith has gotten most of the headlines of the two but there’s a path for UG3 to make it. It’s not much different than Smith. Play fast, show your athleticism, make an impact on special teams. Routine stuff for any late round pick. Gilbert did struggle with his consistency as a tackler, in part due to that smaller frame, and missing tackles in the NFL is a quick way to earn your pink slip. No room for error anywhere but especially on special teams, where any yardage allowed is valuable.

Tegray Scales – Signed to a futures contract after the season ended. Doesn’t have the size or athleticism so it’s difficult to see where he’s going to fit into the roster. Will need to show a hair-on-fire attitude and make plays on special teams because it’s hard to see him having value to the defense considering where he’s at on the depth chart and his own profile. Practice squad at best with him and reps will be hard to come by running as, at best, with the 3’s.

Robert Spillane – Similar boat as Scales. Has been praised for his attitude and love of the game. An important element, especially when you’re fighting an uphill battle like he is, but only gets you so far. Will have to take good angles to the ball and read his keys to make up for his lack of foot speed in the open field. Be physical as a tackler and at the catch point. That’s how he’ll get noticed.