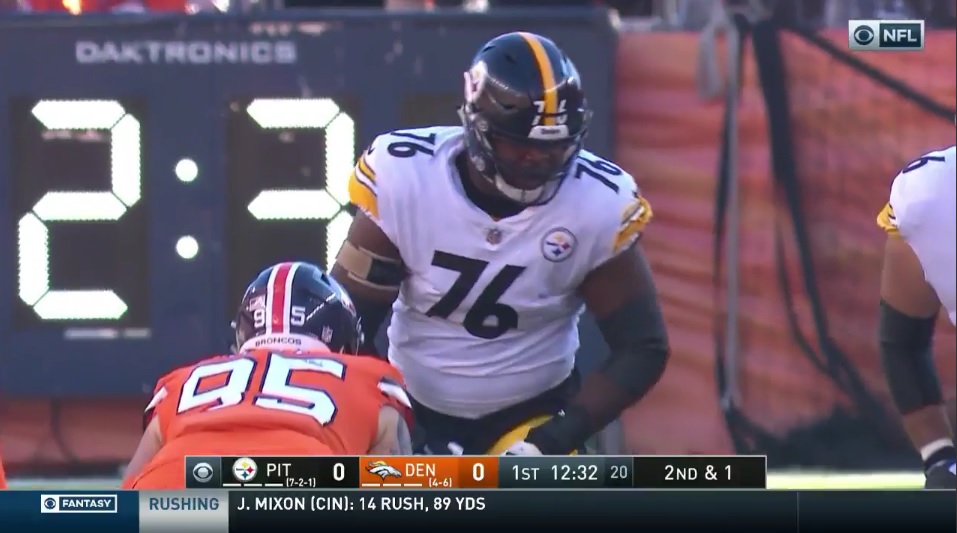 It’s way too early to tell if Pittsburgh Steelers tackle Chukwuma Okorafor, one of the team’s two third-round draft picks in 2018, will ultimately win the starting spot on the right side this summer. However, in an effort to aid him in his battle against the two tackles likely also competing for that starting right tackle spot, Matt Feiler and Jerald Hawkins, Okorafor has dropped his weight some this past offseason.

“I’m down a little bit, so I feel a little bit more fast,” Okorafor reportedly said of his weight last week during Week 3 of OTAs, according to Crhis Adamski of the Pittsburgh Tribune Review.

Apparently Okorafor didn’t reveal how much he now weighs after reportedly dropping an estimated 10-12 pounds during the offseason, so all we can do is assume that amount needs to be subtracted from what he was listed at last year on the Steelers official website and that’s 320 pounds. For whatever it’s worth, Okorafor measured in at the 2018 scouting combine at 6060, 320-pounds.

“Just wanted to get a little quicker,” Okorafor reportedly said.

During his 2018 rookie season, Okorafor played a total of 156 offensive snaps with 86 of those coming at right tackle. 78 of those 86 right tackle snaps came in the Steelers Week 12 road loss to the Denver Broncos as he was needed to make the start in that game due to Feiler being banged up. The rest of Okorafor’s offensive snaps that he played during his rookie season, 70 in total, came with him serving as a tight end/extra offensive lineman.

In Okorafor’s lone start against the Broncos, he allowed one sack and 4 total quarterback hurries. However, it’s worth noting that faced off in that game against one of the NFL’s top edge-rushers in Broncos outside linebacker Von Miller. Not surprisingly, the Steelers made sure to give Okorafor some occasional help during that contest.

“I think I did a decent job,” Okorafor said after his first start. “Except, obviously, a couple plays I wish I had back, like three plays. But I think I did a good job (overall).”

While Feiler made most of the starts last season after taking over for an injured Marcus Gilbert, who has since been traded this past offseason to the Arizona Cardinals, the former undrafted free agent out of Bloomsburg University is far from guaranteed to retain that spot come Week 1 of the 2019 regular season. Should, however, Feiler retain the staring right tackle spot this summer, Okorafor, at worst, will more than likely open his second season in the NFL as the backup swing tackle.