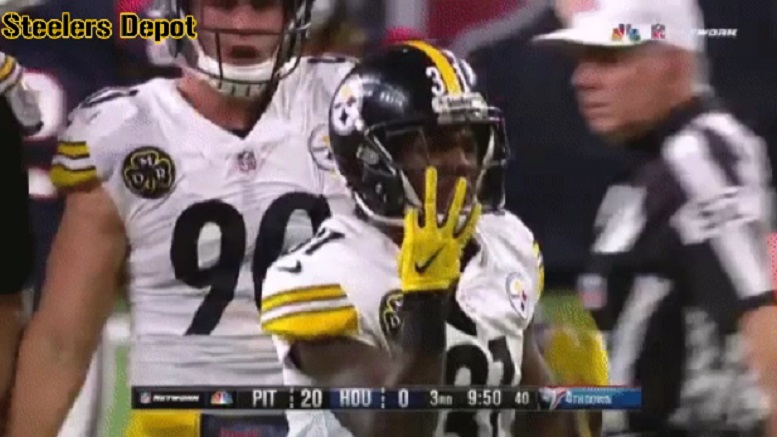 After registering 68 total tackles, 4 sacks, 2 interceptions and a forced fumble during the 2017 regular season, his first with the Pittsburgh Steelers, slot cornerback Mike Hilton only had 57 total tackles, 1 sack, and an interception during the 2018 regular season. This past week, the former undrafted free agent out of Mississippi attempted to explain why his total amount of splash plays decreased some this past season.

“When people are used to seeing splash plays from you, they expect the same thing,” said Hilton, according to Teresa Varley of steelers.com. “It’s tough because teams prepare for you also. I was getting pointed out blitz wise, even when I wasn’t blitzing. I was alerted more from the quarterbacks. Teams were finding ways to attack me in different ways.

“All of the sacks I had that first year, I only got one last year. But I got pressure on the quarterback. Those things matter. But on defense we don’t get the touchdowns, but if we can make an interception or sack, we want that. We want to make those splash plays. It’s still tough when you are missing out on those plays you think you could be making and could be a factor.”

While Hilton did have four sacks for the Steelers during the 2017 season, it’s important to remember that three of those came in one Week 16 game against the Houston Texans, who played two very inexperienced quarterbacks in that contest. Below are two of those sacks.

In total, Pro Football Focus has Hilton down as rushing the passer a total of 76 times during the 2017 season on his way to registering 15 total pressures, of which 4 resulted in sacks.

Last season, Hilton rushed the passer a total of 52 times on his way to registering 7 total pressures of which one resulted in a sack. That sack came against the Oakland Raiders and you can see it below.

Either way you want to slice it, as Alex Kozora showed in a post from last season, when he was able to get after opposing quarterbacks, a lot of times good results came from it.

“Teams are aware of you and have to prepare for you,” said Hilton. “It’s upsetting that I didn’t get to make as many plays, but it’s also a compliment because teams are preparing for me. I know I am making some type of impact.”

As for Hilton making other kinds of splash plays last season, he did have one of the defense’s 8 interceptions last season and his 8 defensed passes in 2018 were two more than he had in 2017.

Hilton is hoping to get a contract extension sometime later this summer after being issued an exclusive rights free agent tender, which he has yet to sign. Regardless of what happens with him contractually this summer, he still figures to play a big role in the Steelers defense during the 2019 regular season and hopefully it ends with him having a career-high in total splash plays.

“There are always things I can get better at. There were plays I left out on the field last year, and I don’t want to do that again,” Hilton said.