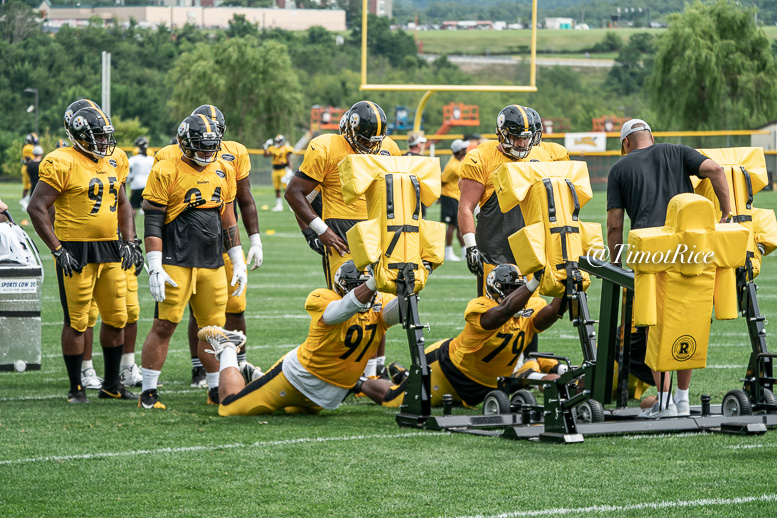 We’re chugging right along here at Steelers Depot with the Ranking the Rooms: AFC North series, and today we move into easily the deepest, and most talented position group in the division by far: defensive line.

Truly, this was the hardest position group to sort through for me, ranking them 1 through 4. Multiple times I felt that I had a set ranking, but then continued to tinker with the rankings before settling on what I have below.

John Dorsey took a strength and made it a trump card this off-season.

The second-year general manager traded for Olivier Vernon, pairing the longtime pass rusher with third-year star Myles Garrett, while also scooping the talented yet troubled Sheldon Richardson off the market in free agency on a one-year deal.

Add in third-year breakout defensive tackle Larry Ogunjobi and the Browns have a dominant starting four up front on defense, at least on paper.

Garrett should once again be one of the best pass rushers in the league, and with Vernon opposite him he’ll see less double teams, which will be a nightmare for opposing offenses. Ogunjobi and Richardson can, and likely will, reek havoc along the interior, which will only make the Browns defense that much better this season.

Behind the talented starting for, the Browns have ridiculous depth with guys like Chad Thomas and Anthony Zettel backing up Garrett and Vernon, while Trevon Coley and Carl Davis give the Browns two strong rotational pieces inside behind Ogunjobi and Richardson.

Who knows how the good the rest of the Browns defense will be, but I’d bet a good deal of money on the Browns’ defensive line being the best one in the division, and one of the best in the NFL in 2019.

Say what you will about the Bengals overall, but there’s no denying how good the defensive line is across the board in the Queen City.

Carl Lawson and Geno Atkins are the clear headliners in the trenches for Cincinnati, but guys like Sam Hubbard, Carlos Dunlap, and Andrew Billings provide the Bengals with some talented depth in the room along the defensive line.

Lawson is working his way back from a torn ACL suffered last season, but when healthy he’s shown he can be a strong pass rusher to build around. Atkins continues to be a dominant force in the middle, whether that’s rushing the passer or playing the run.

Personally, I’ve felt for a long time Dunlap is vastly underrated in the league, so I’m much higher on him than most. Hubbard is exceptionally talented and really started to find his game as a pass rusher late last season. Billings also stepped up in a big way last season next to Atkins, finding a level that many thought he could potentially reach coming out of Baylor.

The real strength here for the Bengals though along the defensive line is the depth.

On the interior, Andrew Brown and Renell Wren give the Bengals two young, high-ceiling defensive tackles to work with as Atkins gets older and Billings moves closer to free agency. Ryan Glasgow and Josh Tupou add two other big, intriguing bodies up front as well.

Outside, Jordan Willis took a small step forward last season off the edge, but he still struggles to finish his rushes. Kerry Wynn is a strong veteran presence that can play on both sides of the defense.

It’s just a strong group overall, and really could push for the same lofty praise as the Browns’ defensive line group during the 2019 season.

Yes, the Steelers – much like the Baltimore Ravens later in this list – play a 3-4-style defense. No, that didn’t affect their rankings here due to fewer players to work with.

Coming in at No. 3 in this list is no knock on the Steelers; it’s just a testament to how great the defensive line groups within the division are.

Cam Heyward continues to get better and better each and every year, both as a run defender and a pass rusher. He’s invaluable in the room too. I’m sure you’d hear a lot of buzz about Heyward being one of the best defensive linemen in the league buzz if you listened close enough.

Opposite Heyward, Stephon Tuitt has all the tools to push this group higher up on the list. Unfortunately, he struggles to stay healthy, and when he’s on the field he’s inconsistent with his production and finishing abilities as a tackler. I still really like the player and think he’s a strong fit for this defense, but I need to see him take a good-sized step forward.

Javon Hargrave really broke out last season and has the look of a linchpin along the defensive line for the Steelers. He’s probably better suited to play in a 4-3 working against guards, but when he’s over the center he’s a dominant force with his strength and quickness.

Behind the starting three, Daniel McCullers somehow continues to stick around. He did take a small step forward last season as a run defender and a pocket-collapser rushing the passer, but he’s definitely upgradeable.

Tyson Alualu is a solid veteran to have as depth. He can play on both sides of the defense and is schematically sound; he just doesn’t offer much as a pass rusher. Rookie Isaiah Buggs is the most intriguing depth piece in this group. He’s a bit undersized, but he’s experienced playing all over the line of scrimmage in a 3-man front, so we could see the same thing moving forward in Pittsburgh. He has a bit more pass rushing juice than some will have you believe, and he’s strong as an ox. He just needs to tap into that potential.

Casey Sayles, Lavon Hooks, Conor Sheehy, and Greg Gilmore all offer intrigue as depth pieces. Don’t be surprised if two of those guys mentioned above work their way onto the 53-man roster come the end of training camp.

This position group has been hit pretty hard in free agency in recent years for the Ravens, but the franchise still possesses a ton of talent in the trenches. It just doesn’t measure up well against the rest of the division, as the franchise would hope.

After signing a monster free agent deal two years ago to stay with the Ravens, Brandon Williams hasn’t had as big of an impact as he did leading up to the deal. He’s still one of the strongest players in the league, but injuries appear to have sapped some of his explosiveness.

Michael Pierce and Willie Henry have developed nicely for the Ravens and given them two strong rotational pieces along the 3-man front.

The issue up front for the Ravens is the lack of pass rushers, which will be an overall problem for the defense, not just the defensive line.

Really, defensive end Chris Wormley is the lone pass rusher that the Ravens can boast about up front. Rookie Daylon Mack could slide outside and rush the passer for the Ravens in their base defense, but that’s about it.

The Ravens will be stout against the run up front with all the big bodies that they possess, but unlike the Steelers, they don’t have many that can get after the quarterback. That was the biggest deciding factor.