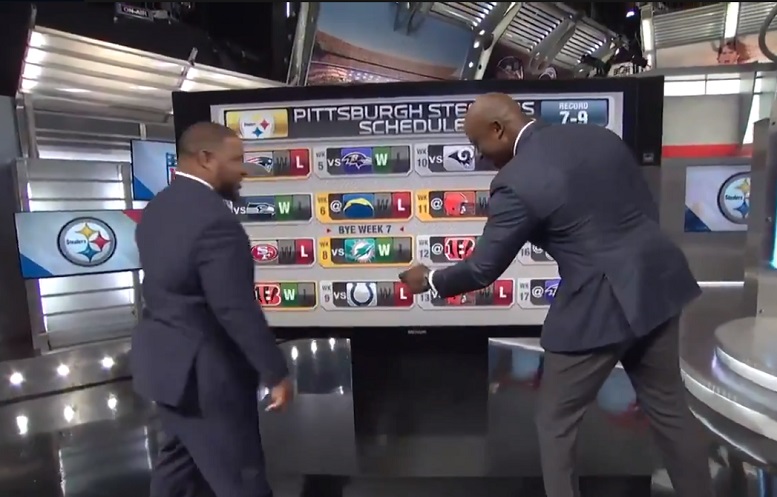 How will the 2019 regular season ultimately shake out for the Pittsburgh Steelers? While it’s still only early June, Maurice Jones-Drew and Akbar Gbajabiamila of the NFL Network attempted to predict the Steelers 2019 record Thursday night by going through their schedule game-by-game.

I must warn you before you watch the video segment below that it’s very poorly done in the sense that I do not think Gbajabiamila understood what was trying to be accomplished. In short, Gbajabiamila’s vetoing of a few of the losses that Jones gave the Steelers seem to be games he’s trying to predict the winner of, not whether or not the Steelers will win or lose the contest. Trust me, you’ll see what I’m getting at when you watch the video below.

“I dont know what Akbar’s doing,” Jones said after predicting all the games.

As for Jones’ game-by-game predictions, he has the Steelers going 7-9 in 2019. He has them losing games to the New England Patriots, San Francisco 49ers, Los Angeles Chargers, Indianapolis Colts, Los Angels Rams, Cleveland Browns, New York Jets and Baltimore Ravens. To fully clarify, Jones has the Steelers losing the rematch game to the the Ravens and losing twice to the Browns.

Jones made it point during his game-by-game predictions of pointing out how bad the Steelers have been under head coach Mike Tomlin when it comes to playing on the West Coast.

“Its not my fault, we all know this. Pittsburgh struggles on the West Coast,” Jones said after picking the Chargers to beat the Steelers.

These two certainly did butcher this segment and each in their own way. Both of these former NFL players, along with the NFL Network, should be embarrassed to put this on television and the internet.

.@akbar_gbaja and @mjd have VERY different ideas on how the @steelers season will play out 😂😂😂 pic.twitter.com/G3d5B6ESRk

Here is the game-by-game prediction for the #Steelers 2019 season by @MJD: pic.twitter.com/M536d5aqjN