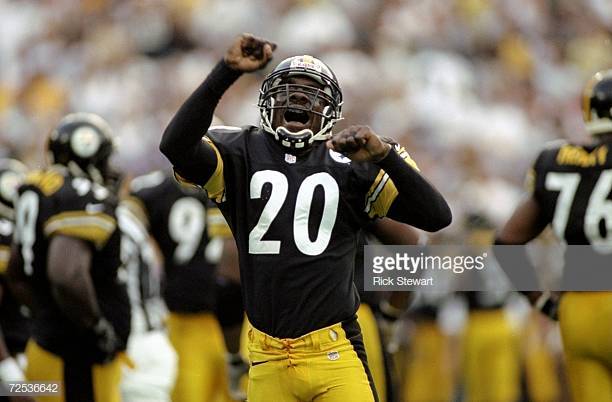 For the longest time, the Pittsburgh Steelers didn’t draft corners in the first round. Maybe it was a philosophy thing, preferring zone corners who could tackle and support the run, the type of guys who don’t exactly fly off draft boards. Perhaps chalk it up to being an issue of talent not being there or focus that lent itself to other positions. But from 1999 to 2015, no corner was drafted in the first round.

But in 1998, both the team’s starting cornerbacks were first round picks. There was Chad Scott, who the team drafted 24th overall in the 1997 draft. And then there was Washington, who I’ll be honest, had no idea was the 18th overall pick of the 1994 draft. Not by Pittsburgh, of course, It was the Minnesota Vikings who turned in the draft card for him. Here’s his rookie card, showing him as a member of the NC State Wolfpack. 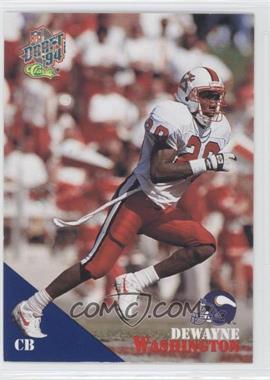 Washington made an immediate impact, starting all 16 games for the Vikes and picking off three passes, returning two for touchdowns. Some outlets pegged him for Defensive Rookie of the Year though the AP gave the nod to Miami Dolphins’ nose tackle Tim Bowens. Washington would go on to start all but two games over the next three seasons, highlighting his ability to attack the football. In 1997, he set a season high with four interceptions.

With free agency out of its infancy stage, the modern version of it introduced in 1993, the Steelers jumped on him to replace a struggling Donnell Woolford. Washington wasn’t their first offseason pickup, Kevin Greene stakes that claim, nor was Washington their best one ever, James Farrior can probably win that argument, but he reminds me of Steven Nelson. A good #2 corner with ball skills and a decent resume.

Washington continued to be that steady, dependable force in Pittsburgh. He played six years, never missing a game, and intercepted a healthy 19 passes. In fact, over that span, ’98 to ’03, he picked off more passes than any Steeler and ranked just outside the Top 20 league wide. To date, he still ranks tied for 15th for the franchise mark, tied with Scott, the man he started opposite of way back when.

But at 31, the Steelers turned him loose, getting rid of him a year early as opposed to a year late. Deshea Townsend took Washington’s vacated spot and by 2005, Ike Taylor rose up the ranks to run with the starters. He signed and started all 16 games with the Jacksonville Jaguars in 2004, picking off a pair of passes but his play was clearly in decline. He spent a final season as a reserve for the Chiefs before retiring. A 12 year career, finishing with 31 interceptions. From his ’94 draft class, only Aaron Glenn and Rodney Harrison picked off more passes.

For about a decade, Washington seemed off the radar, though it appears he focused on giving back to his community, starting up the Carolina Skills Academy that ran for a few years.  He transitioned into coaching at the high school level and in 2015, was announced as the head coach for Heritage High School in his home state of North Carolina. It was a coaching staff with some prominent names, too. He hired Torry Holt to be his WRs coach and Willie Parker to teach the RBs. The star studded staff paid off. After a quiet first season, going 5-7, Washington led the school to 11-3 and 12-2 records the next two seasons, including two deep playoff runs.

It made his decision to step down as head coach in January of 2018 all the more surprising. Reportedly, Washington said he wanted to spend more time with his family. An excerpt of the news from Highschoolot.com.

“Heritage athletic director Pat Kennedy confirmed the move in a written statement on Tuesday afternoon. Washington later told HighSchoolOT.com that he decided to step down to spend more time with his family and focus on growing his business. He said he did not have another coaching job.

“Heritage High School would like to thank Coach Washington for his service to our school and to our community,” Kennedy said in the statement. “We appreciate his time and commitment to our football program.'”

And just to remind you how old all of you are, Washington’s son, Dewayne II, is entering his redshirt sophomore year at Miami (FL). Listed as a linebacker/fullback, he’s yet to appear in a game but could be slated for a role in 2019. And even if he doesn’t have the football success of his dad, he seems well on his way to having a successful career, having already interned with Citi Bank and JP Morgan.

Dewayne Washington, your blast from the past.