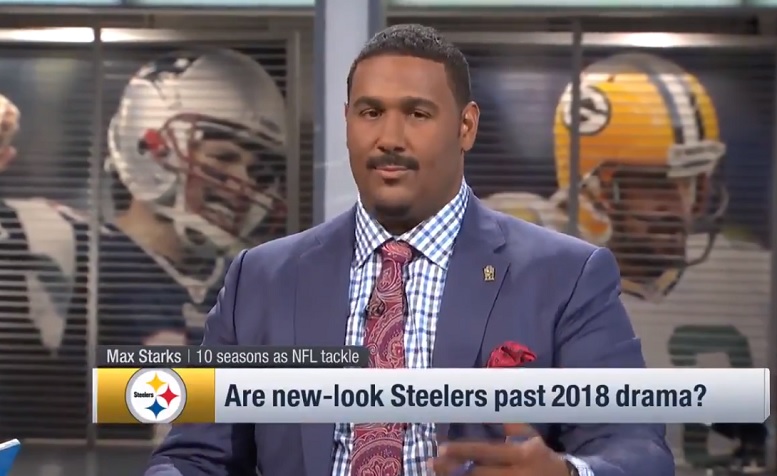 At the conclusion of his annual football camp on Sunday, Pittsburgh Steelers quarterback Ben Roethlisberger talked briefly with the media in attendance and during that short session he was essentially asked about there now being less drama inside and outside the locker room this offseason than in previous seasons.

“You know, it’s been a little crazy the last few years, maybe more so than usual that we’re used to dealing with. So, to kind of get back to quote-unquote normalcy is kind of nice,” Roethlisberger said.

During Mondays episode of ‘Total Access’ on the NFL Network, former Steelers tackle Max Starks was asked to comment on the Steelers possibly now having all of the drama from the last several seasons behind them.

“I think when I look at this and the situation that went down in the last couple of years, A.B., Le’Veon and Ben, and just kind of that friction, I think it really comes down to Ben is an older mature quarterback who wants the best for everybody, but at the same time he doesn’t necessarily know how to relate,” Starks said. “You know, he’s not the guy that’s social media-savvy, let’s just face it, and he doesn’t really know how to communicate with these guys. So, I think for him, having young guys where he doesn’t have to have a premeditated approach because the stature has gotten so high for certain individuals that you must get the ball in their hands or else they’re going to have a freak out session on the sidelines. I think you kind of have to have that personality.

“And having a lot of these young guys, I was at minicamp last week watching the guys walk around, I couldn’t name most of them. And I think that kind of helps for Ben in that he has young, hungry guys who want to prove themselves. So, now it’s about the best available option as opposed to having that menu of go here first, go here second.”

Former NFL running back Terrell Davis couldn’t wait to disagree with Starks saying that he thinks Roethlisberger is essentially fine with losing two very talented players for good this offseason in wide receiver Antonio Brown and running back Le’Veon Bell.

“Ben is saying what he has to say,” Davis told Starks. “He’s saying what he has to say right now, because he has to say that right now, with those two guys gone, the climate is better in this locker room and I don’t have to feel like I have to force the ball. But I thought most quarterbacks wanted that go-to guy, they wanted somebody that when when things get rough and tough, ‘I got to find that receiver, I know exactly who to go to.’ You can’t tell me that he is better today than he was when A.B. was on that team.”

When Starks rebutted Davis, he made sure to point out that Bell no longer being in Pittsburgh wasn’t the fault of Roethlisberger and that the Steelers offense did a good job overal last season of replacing his production with multiple players.

“Le’Veon was a contractual issue,” Starks told Davis. “It wasn’t between Ben and Le’Veon, it was between the organization and you saw that there can be production with James Conner and a mix in the backfield. You can’t replace A.B. Not asking him [Roethlisberger], he even said that he couldn’t replace A.B., but you have a bunch of guys so now you can spread the field. So, when you see New England week one, New England can’t take away A.B., they have to pick somebody to take away and then the other guy could step to and emerge.”

Most of the Steelers drama the last few seasons came courtesy of Bell and Brown and with those two no longer in Pittsburgh, a big dark grey cloud seems to have evaporated. There was nothing wrong with what Roethlsberger said Sunday night about the team getting back to some level of normalcy this offseason, because that’s exactly what has happened now.

The fact that Starks and Davis even commented Monday about the level of drama surrounding the Steelers currently made for a pretty boring topic. Additionally, I don’t think either side made strong arguments on the subject. The less interesting the Steelers are as a topic the remainder of the offseason, the better and that will lead to lest segments like we saw Monday night on the NFL Network.