Over the weekend, we passed along this article of T.J. Watt breaking down the foundations of himself as a pass rusher. An insight into what he values and his overall plan of attack. That in mind, I thought it’d be fun to see how it translates to the football field.

Watt ended the year as hot as any pass rusher in the league, recording three sacks in the final three weeks. He ended with 13, tied 7th in the NFL, and you could feel the progression he was making game-to-game. His hand usage and overall plan evolved as the year went on. For 2020, he feels like a legitimate threat to break the Steelers’ single season sack record, currently held by James Harrison’s 16 in 2008.

In Watt’s video, he described his plan in this way.

2. For him, he starts with speed. Attack the outside, force the tackle to defend him wide.

3. Once the tackle begins to sit and expect on the outside rush, counter with a bull rush. Go power, attack the tackle, and beat him that way.

That’s how he won against New England Patriots right tackle Marcus Cannon in Week 15. Let’s check it out.

The first true pass rush he had against Cannon came late in the first quarter. And what does Watt start with? Speed rush to the outside. Watt is the LOLB in all these clips. Notice he’s in the “track stance” he referenced in the video, too. Something that’s become more common for the Steelers’ edge rushers. Watt and Anthony Chickillo do it the most, getting back to their roots as hand-in-the-dirt defenders from college (Watt stood up a lot more than Chick, obviously).

Here, Cannon is able to take him up the arc pretty well though Watt is still able to move the pocket and flush the quarterback.

Next chance he gets? Same thing. Get the tackle to expect speed and have to set quicker and wider to try and defend it. Again, pressure forces the quick throw to the running back.

And here’s the counter. Late second quarter. Cannon is expecting speed so Watt throws the bull rush at him. Timing of his hands and feet create power and jolts Cannon back. Leads to the pressure, near sack, and forces Tom Brady to check it down to the right flat.

Fast forward to mid 3rd quarter. Watt is again back to speed. Bit more contact, ripping through, but setting that edge to soften up his counter.

The very next snap? Watt is going to set up like he’s rushing wide again but turns into Cannon, gets into his pads for the bull, and disengages. Cannon was waiting for the speed so much his hand use is proper to defend the ball. Cannon has his hands wrapped to Watt’s sides, letting Watt get into his chest and take control of the rush. 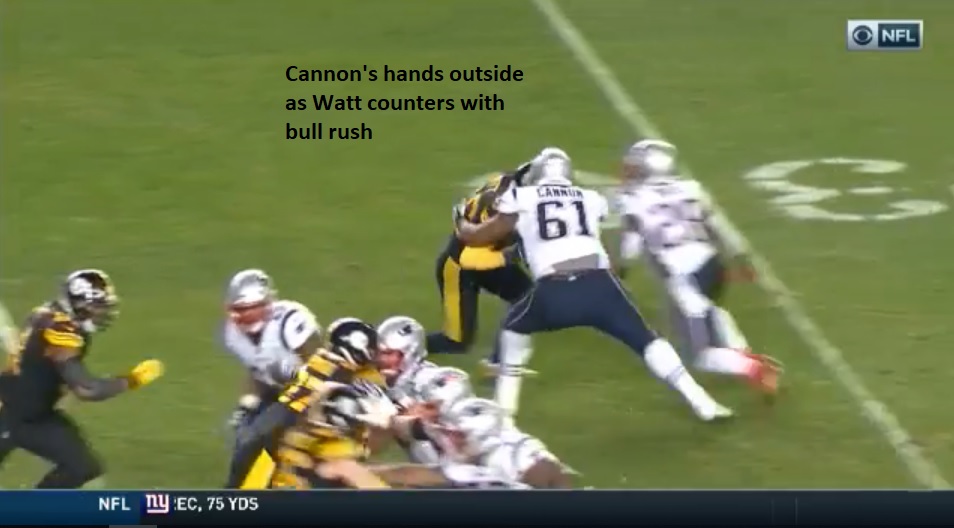 He creates the power and leverage. Once he’s done that, the battle is over. He simply sheds on his way to the QB and takes Brady down for the sack.

His pass rush IQ coupled with the athleticism, technique, and hand use he shows has the makings of someone who could become an elite pass rusher. I don’t think he’s quite there yet, if only because you want to see him do it longer than he has. Dial has only been turned all the way to 11 since midseason. But if I’m Deebo, I’m looking over my shoulder in 2019. Watt is coming for that sack record.