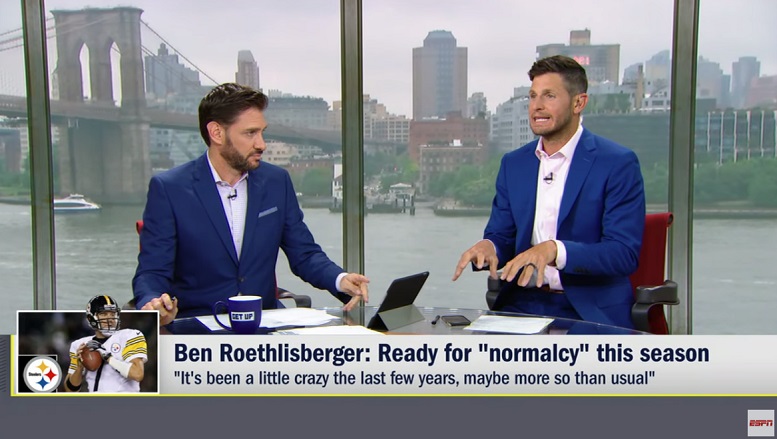 In case you haven’t heard by now, the Pittsburgh Steelers no longer have wide receiver Antonio Brown and running back Le’Veon Bell on their team. With both players no longer with the Steelers, the level of drama surrounding the team seems to have decreased significantly and even quarterback Ben Roethlisberger hinted as such late last week at his annual football camp.

“It’s been a little crazy the last few years, maybe more so than usual that we’re used to dealing with,” Roethlisberger said in a media session from his camp. “To kind of get back to quote unquote normalcy is kind of nice.”

Since making those “normalcy” remarks, they’ve been dissected several different ways by the local and national media. Even Mike Greenberg and former NFL quarterback Dan Orlovsky of ESPN recently discussed that quote of Roethlisberger’s and if there’s anything of significance that can be extracted from it.

“So, here’s what’s happened, he has now entered that zone where everything he says is news, right? Like, we all know that it gets to a point where everything is something, even nothing turns into something,” Greenberg said. “Did that seem like nothing or something?”

It didn’t take Orlovsky long to answer Greenberg and quite honestly, the first part of his response was right on the money.

“It seemed like nothing,” Orlovsky said. “You know, it seemed like he was kind of following Mike Tomlin, their head coach’s line of, ‘it’s time to move on.’ You know, Big Ben is doing a really good job this offseason of trying to get rid of all the talk about A.B. and Le’Veon Bell, and anything tied to it and going ‘we got to move forward. It’s time to move forward.'”

Orlovsky, however, couldn’t stop there as he then proceeded to go into how the Steelers return to normalcy off the field might not be a great thing when it comes to the play of the offense on the field.

Greenberg then had a great response to Orlovsky.

“I understand what you’re saying, but I always hear from you football guys that it is the sport where teamwork and working together matters the most and if there are distractions, which clearly for various reasons those two guys created. Le’Veon in his absence and A.B. candidly by his presence last year, that to some degree there is addition by subtraction in that,” Greenberg said.

When asked by Greenberg if what he had just said makes sense, the former NFL quarterback had another quick reply.

“Oh, surely and the reality is like we often talk that coaches set cultures, really the players are the people that set the culture,” Orlovsky said. “And A.B. and Big Ben had such success on the field and down the back end of their careers together there was such a friction that certainly there’s going to be a healthier everyday work environment. But at the end of the day, the NFL is also about producing. You know, like there’s a saying in the NFL, you know, ‘winning covers everything.’ It doesn’t cure everything, it covers everything.

“This team and organization won for a long time and probably covered up a lot of that stuff. And this year they didn’t win to the expectation of what we were used to. All I’m saying is this, yes, it’s great to have the healthy culture and going to work every day and not having that friction, but at the end of the day, you had a bonafide superstar number one and you had a bonafide two-way, incredible running back. Those guys are no longer there. So, you’re going to be more normal like so many other teams in the NFL are on the field.”

Orlovsky pointing to Brown no longer being in Pittsburgh is certainly expected but there’s really no reason to keep bringing up the loss of Bell as the Steelers offense got by just fine without the running back in 2018 after he chose to sit out the entire year because of him not wanting to play under the franchise tag amount of $14.544 million. Like it or not, Steelers running backs James Conner, Jaylen Samuels and Stevan Ridley all did a great job last season of combining to produce the same kind of numbers that Bell posted during the 2017 season.

Greenberg seemed to have the last word on the Roethlisberger topic and it included him essentially saying that the Steelers quarterback seems to now be considered by many to be an afterthought and especially when it comes to the AFC North division.

This thing is so set up for Ben in a way, right? His best weapons are gone, he’s become sort of the enemy,” Greenberg said. “There’s a superstar young quarterback everyone loves in Cleveland in his division. A superstar young quarterback everyone loves in his division in Baltimore. The world is ready to move on. It’s a perfect time for Ben Roethlisberger to remind everyone who he still is.”

What Greenberg doesn’t specifically say is that Roethlisberger can succeed without him no longer having Brown and Bell on the team. After all, he did so before both of those players even arrived in Pittsburgh. Roethlisberger can also do so without leading the NFL in passing yardage. Look, losing Brown is a big deal and it’s a much bigger deal than the team now being officially without Bell, who didn’t play a single snap in 2018. Also, do keep in mind that the Steelers played without Bell quite a bit during his time in Pittsburgh. In fact, over the course of 6 seasons from 2013-2018, Roethlisberger, Brown and Bell all played together in just 56 regular season games out of a possible 96.