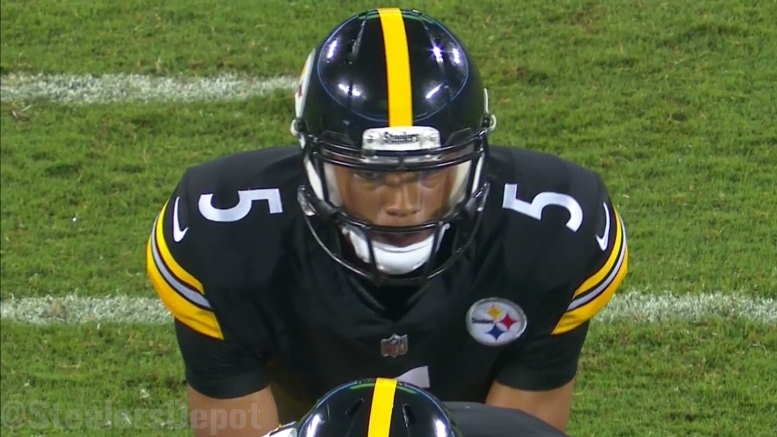 The Pittsburgh Steelers 2019 training camp and subsequent preseason should include a great battle between quarterbacks Joshua Dobbs and Mason Rudolph for the right to backup starter Ben Roethlisberger during that regular season. Currently, Dobbs is expected to enter training camp as the No. 2 quarterback on the team’s depth chart as that’s the spot he held all throughout the 2018 season. However, last year during the team’s OTA practices, Dobbs was the No. 3 quarterback behind veteran backup Landry Jones so that means this year’s reps are probably higher quality ones. Dobbs talked after Wednesdays practice about how different the entire process feels this year because of that.

“Year-three, of course, so it’s always going to be different every time you come in here,” Dobbs said, according to audio on 93.7 The Fan. “Just in your growth, understanding of the offense. The reps are different, obviously, this year. So, to be able to come in and get those reps, those significant reps and try and make the most of them with what I’m seeing, with how I’m executing, how I’m communicating with the line of scrimmage, receivers, yeah, they’re definitely great reps.”

Dobbs was immediately asked on Wednesday how much comfort plays into his third year of OTAs and as you can probably imagine, he considers his past experience at dealing with this part of the offseason process a considerable help.

“Huge,” Dobbs said. “As you continue to grow in any offense, whether it’s high school or college, and even now at this level, as the years stack, you start getting so much more comfortable. Of course, after you get a little game experience, the comfort, you start to settle in. You know, the game slows down for you, you’re able to identify different people on the field, your sights, your hots and be able to execute to play quicker. And you’re able to get in and out of plays and get the team in the right look to make sure you’re able to take advantage of what the defense is giving you. So, yeah, the comfort definitely grows and I feel good out there.”

With Rudolph expected to push Dobbs very hard for the backup job in 2019, the latter was asked after Wednesday’s practice how he views his competition this summer against the younger quarterback.

Also, Dobbs made sure to let be known on Wednesday that while he his competing against other quarterbacks in practices, he isn’t one who compares how he’s doing to how others are doing throughout the process.

“Yeah, you compete, you don’t compare,” Dobbs said. “You just go out and play football. At end of the day, let the chips fall where they may, but you just go out and play football. Football’s the ultimate competitor sport, so I love the competition. I welcome competing against our defense in seven shots and I love the little competition that we have within the room, whether it’s, you know, in different drills that we do throughout the day. So, that’s the game of football and you just embrace it.”

Another thing that Dobbs embraces is the little bit of playing time he received during the 2018 regular season in relief of Roethlisberger. Dobbs, in case you forgot, logged 30 total offensive snaps at quarterback in five different 2018 regular season games with the bulk of his playing time coming in the second half of what would ultimately be the team’s Week 14 road loss to the Oakland Raiders. For the season, however, Dobbs’ passing stats weren’t great as he was just 6 of 12 on his attempts for 43 yards and an interception for a lowly QB rating of 24.0. Bad overall 2018 showing and all, Dobbs values that little bit of real-game playing time he received last season.

“Well, I think, you know, in-game reps and the helmet perspective in-game is extremely valuable,” Dobbs said. “Just, you know, whether it’s, you know, trusting your keys and your reads, or just getting those real game reps. You know, it’s a little more sped up than a Wednesday, Thursday and Friday practice during the season. So, those reps are extremely valuable. I was able to grow a ton from them and I enjoyed them and I want to get some more and I want to continue to make an impact however I can.”

While it’s understandable as to why Rudolph wasn’t able to overtake Dobbs for the backup spot behind Roethlisberger last season, him failing to do so at some point between now and the middle of the 2019 regular season won’t be understandable at all. After all, the Steelers selected Rudolph in the third-round of the 2018 NFL Draft and after moving up a few spots via a trade to do so.

With Rudolph’s selection coming one year after the Steelers had drafted Dobbs, it will be viewed globally by the team’s fan base as colossal mistake and waste of a third-round selection should the Oklahoma State product be unable to overtake the Tennessee rocket scientist this season. That said, I don’t expect Dobbs to just hand Rudolph that No. 2 spot this summer just the same. After all, he’s very much a competitor and a competitor that has something that Rudolph doesn’t, and that’s real-game experience and a lot more comfort.