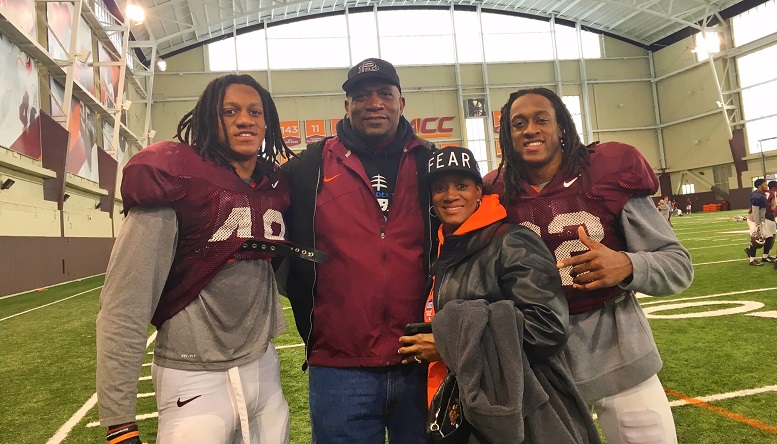 Last season, Terrell Edmunds got the opportunity to play with his older brother, Trey Edmunds, at the professional level. Terrell, the Pittsburgh Steelers’ first-round draft pick a year ago, was an instant starter. Trey was with the New Orleans Saints in 2017 but was released at cutdown time, and Pittsburgh signed him to their practice squad before calling him up for the final month of the season.

This year, they will get the chance to pay a visit to their younger brother, fellow first-round pick Tremaine Edmunds, linebacker for the Buffalo Bills. The Bills head to Pittsburgh in Week 15 in 2019, in what will be dubbed the ‘Edmunds Bowl’.

They talked about that recently when all three of them appeared together on a Good Morning Football segment. When asked if there were going to be any wagers placed on the game between them, Tremaine said, “I’m pretty sure there’s gonna be something. There’s gonna be something. You know how the season is. It’s a long season, we’ve got to take it one game [at a time]. But when that time come, they gonna hear from me”.

Tremaine was the highest draft pick of the group. He had his rough moments early on, but in 15 games—all starts—he finished his rookie season, all at the age of 20, with 121 tackles, two interceptions, two forced fumbles, and 12 passes defensed, as well as two sacks.

As for Terrell, he played in all 16 games at strong safety, starting 15. He would go on to record 78 tackles with one interception, four passes defensed, a sack, and a recovered fumble. Both brothers are expected to make a sizeable jump in year two.

What sort of players will they be by Week 15 of the 2019 season? That should be fun to look forward to. The only real variable is whether or not Trey gets the opportunity to join them. the Steelers already retained two running backs from last season and drafted another in the fourth round, but he is said to have had a strong spring and would be hard to cut.

This will be the first time in their lives that they will have ever been on opposite sides in a stadium. Throughout their football history, they were always on the field together, even relaying that their first snap at Virginia Tech was a kickoff, and they all lined up side-by-side, racing down the field to see who could get there first.

Still, for as far as brotherly love goes, it’s still football. The defensive-minded brothers admitted that they have never tackled one another. Terrell and Trey are on the same team, so of course that isn’t going to happen for them, for now. Tremaine, however, might get that chance. “He’s gonna feel me”, the youngest brother said of the eldest.

Last season, Maurkice Pouncey and T.J. Watt got to play in the same game with their own brothers, Mike Pouncey and Derek Watt. They will get to do so again as the Steelers play the Los Angeles Chargers again this season. Now the Edmunds brothers join the fun.