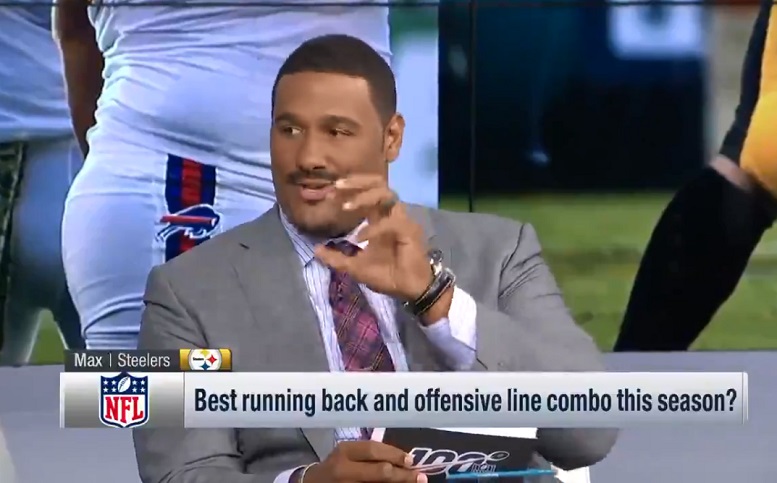 Which NFL team has the best offensive line/running back combo ahead of the start of the 2019 regular season? Former NFL players Terrell Davis and Max Starks, a running back and a tackle, respectively, both debated that question during the Friday edition of ‘Total Access’ on the NFL Network and each had different answers.

As for Davis, who played running back for seven seasons in the NFL with the Denver Broncos, he firmly believes the Dallas Cowboys currently own the best offensive line/running back combo in the NFL.

“I got to go with the Dallas Cowboys,” Davis said. “I’ve got to go with the Cowboys line with [Zack] Martin and [Travis] Frederick and now you’ve got, obviously you got this man right there, you know, Zeke [Ezekiel Elliott], doing his thing. So, they’ve been really good for a number of years. They’ve only gotten better with Connor [McGovern] coming in, they drafted him. So, I’ve got the Cowboys and Zeke as the best combo.”

Starks, however, who spent most of his NFL career with the Pittsburgh Steelers, chose his former team as the one with the best offensive line/running back combo in the NFL.

“13 Pro Bowl selections between that starting five, first and foremost,” Starks said. “Hey, Villa [Alejandro Villanueva], doing well for the number 78, the number 78 is alive and well in Pittsburgh. But let’s talk about my Gator and my Vol, Ramon Foster Maurkice Pouncey, left guard and center combo, and then David DeCastro, another All-Pro caliber guy. And then at the right tackle position, we’ll figure it out. Marcus Gilbert was injured last year, he’s now in AZ [Arizona]. But I like the guys that they have in there. I was at minicamp last week, got a chance to watch the offensive linemen work and they got some good guys. [B.J.] Finney is a good guy that I like, I think is an up and comer. Zach Banner’s another guy. They got more tackles than anybody else in the league, so they’ll get it right.”

Starks didn’t even mention Chukwuma Okafor or Matt Feiler by name and both were with the Steelers last season and filled in well at right tackle once Marcus Gilbert went down injured. The team also drafted tackle Derwin Grey this year and hope to have another former draft pick of their’s, Jerald Hawkins, back competing for a roster spot this summer after he missed all of the 2018 season with an injury.

“And we got another SEC kid, we got Benny Snell back there to compliment Jaylen Samuels and James Conner,” Starks said. “And think about this, in 13 games [last season], he was almost at a 1000 yards. So, I think a healthy season, having a good compliment in the backfield, is only gonna make that group look even better and more dominant come this season.”

Starks does put up a nice argument as to why the Steelers enter 2019 with the best offensive line/running back combo. However, let’s do remember that Steelers running game wasn’t great last season from a successful run rate percentage. While the Steelers 2018 running back combination of Conner, Jaylen Samuels and Stevan Ridley did produce just over 1,300 rushing yards, a 4.4 yards per carry average and 13 rushing touchdowns, the unit’s adjusted run success rate of 50.2% was ranked 17th overall in 2018. And Conner’s adjusted run success rate of 51.9% was ranked 21st overall in the NFL when compared to other running backs that had 100 or more carries.

As you can see, both the Steelers and Cowboys need to have better running games in 2019 when it comes to a successful play rate standpoint.