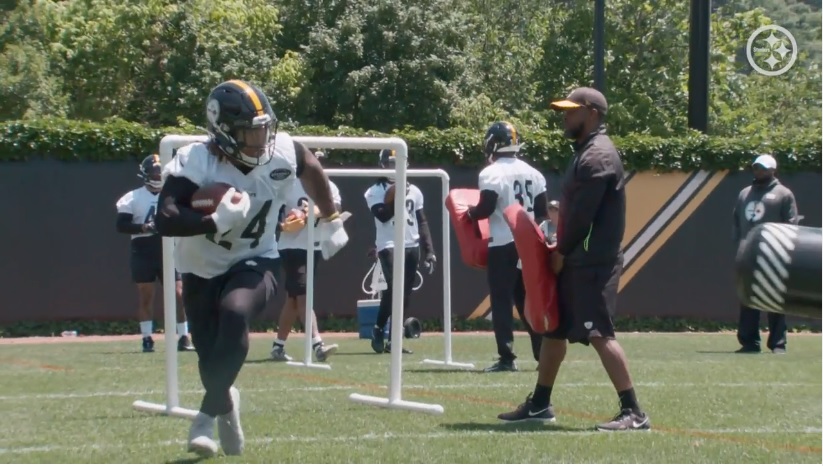 OTAs and minicamp are invaluable for a rookie. Learn the ropes, how an NFL practice is conducted, getting your head in the playbook. All the foundational elements needed to produce on Sundays. But shorts and shells in Pittsburgh? A couple practices and then a few days off?

That’s not on the schedule for Latrobe. Benny Snell knows it. When the team gets together next, reporting at St. Vincent College July 25th, everything changes.

“I’m expecting it to be real physical,” he told the media via the team website. “Everyday is going to be a grind. It’s always been a grind but I know once I hit Latrobe, it’s like Latrobe is the real deal. I’m going to make sure this summer I prepare my body the best for that. So I’m looking forward to it.”

Physical is an understatement. Those around the league who visit this normally sleepy down regard Latrobe practices as one of the most physical. The first two days will be in shells but by the third day, the pads come on. Backs on ‘backers kicks off about 45 minutes into practice, followed by the first full-contact 11 on 11 session. Even though they’re teammates, Steelers’ defenders don’t let up. Vince Williams has ruined plenty of running backs’ days in these settings.

Not only are the individual practices grueling, the totality of them adds up. Check out the 2019 schedule. There’s practices on nine of the first ten days. After their second day off, the team comes back for three more practices before playing their first preseason game. Another day off and then it’s five practices in six days before breaking camp.

If you’re not in shape, you don’t stand a chance. Snell knows he has to use these next five weeks wisely.

Snell was asked how to walk the line between getting the rest any athlete needs versus staying in peak conditoning.

“With camp coming up, this is make and break. So I gotta lean towards making sure my body is correct. So I’m going to get my time a little bit, a little bit of time off, but I know I gotta get after it.”

In 15 camp practices last year, the third most carries went to Stevan Ridley, who recorded 36. But Ridley was a veteran and Snell a rookie so it’s reasonable to think they want to see more out of Snell. He may wind up with closer to what Jaylen Samuels saw last season, 56 carries. The Steelers’ backs were also abnormally healthy too. One injury could dramatically shift workloads. And we haven’t factored in the preseason games, where Snell could easily double that amount. Samuels, for example, had 28 carries last year but again, this group managed to stay injury-free.

Snell has the right approach. If he comes into camp in great shape and impresses Mike Tomlin, who harps on conditoning maybe more than any other coach, he’ll earn trust and a chance to carve out a role during the regular season.