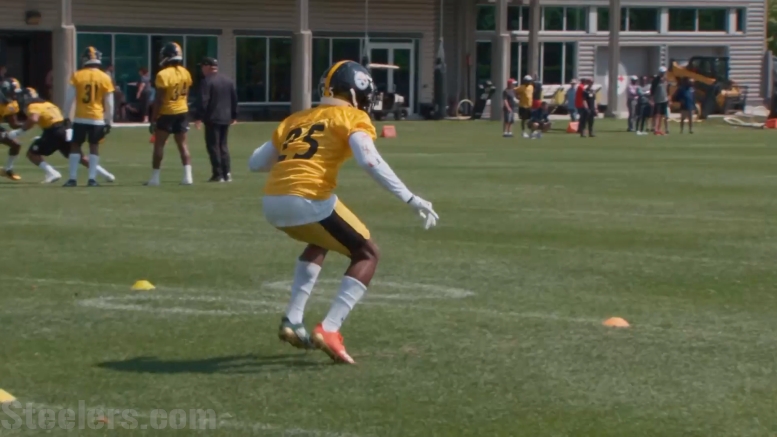 Question: Which current Steeler would you sign up for the ’40 yards of Gold’ 40-yard dash event?

Originating, if I understand correctly, from a boast made by Ted Ginn, Jr. that he is still the fastest player in the NFL at the age of 34, there is apparently, in theory, a pay-per-view event in the works for later this month featuring a number of NFL players.

Whether or not this actually happens is another story. For obvious reasons, a lot of teams will not want their players to participate in such an event, and frankly, many players wouldn’t want to take that unnecessary risk anyway.

But let’s say it happens, and one member of the Steelers is involved. Who would it be? If Darrius Heyward-Bey were still on the team, he would always be a good option. Frankly, I would be interested in seeing what kind of speed he still possesses a decade on.

Examining the current roster, though, obviously Artie Burns has a track background, so he would be an option. Devin Bush might be one of the fastest players on the team already, but obviously nobody is going to want to see such an important piece taking part in such an unimportant event.

Perhaps the only other real enticing option would be Diontae Spencer, who several years ago turned in a sub-4.4 40-yard dash at his Pro Day. He didn’t make it in the NFL initially, but has since carved out a successful career in the CFL, which includes work as a return man.

Considering this question makes you realize that the Steelers are no longer a team with great speed at the two premiere speed positions: wide receiver and cornerback. Guys like JuJu Smith-Schuster and Joe Haden have enough speed to do their jobs, but they’re not going to win on the track.

The one thing Dri Archer had was speed, posting one of the fastest times in Combine history. It would be interesting to see him on the track, but I believe the event is only open to current NFL players.