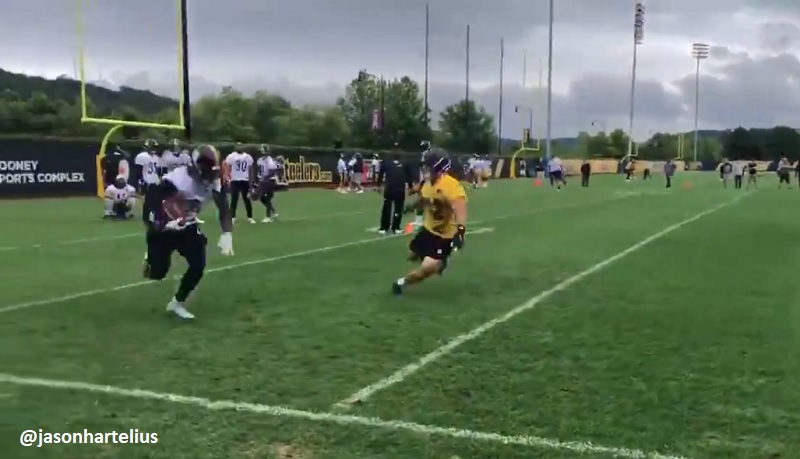 The Pittsburgh Steelers first preseason game of 2019 will take place at Heinz Field 10 weeks from tomorrow and that contest against the Tampa Bay Buccaneers will include mostly younger players getting most of the playing time. One of those younger players, Sutton Smith, one of the team’s three sixth-round draft picks this year, will likely play offense, defense and special teams in the preseason opener and thus log the most playing time of anybody on the roster in that contest.

Smith, who played defensive end during his college career at Northern Illinois, after mostly playing running back in high school, has been asked to play outside linebacker and fullback so far during the team’s OTA practices, the sixth of which concluded on Thursday. At the conclusion of Thursday’s practice, Smith talked more about his willingness to do whatever it takes to make the Steelers 53-man roster this year and how OTAs are going for him so far.

“I think it’s gone petty good,” Smith said, according to 93.7 The Fan. “You know, I mean, they want me to learn two positions right now and I think I’m doing really well at that. It’s, honestly, it’s a learning curve, you know, like for all the rookies, but I think I’m picking up well and I think I just got to keep playing fast and leave nothing on the field every day.”

Last week during the team’s first week of OTA practices, it was revealed that Smith was getting some reps at the fullback position. He was asked again after Thursday’s practice what precipitated that position addition and how he’s received being asked to take reps at fullback, in addition to some at linebacker.

“It’s definitely a change because I played running back back in high school and obviously everybody thought like since of my stature, fullback could be a possibility,” Smith said. “And I definitely agree. Whatever I can do to be on the field is what I’m going to do. And whatever they need. Like I’ve said in the past, I’m going to do whatever a Coach Tomlin needs and the Steelers organization needs me to do to be successful for this program and just helping out everybody here. That’s my goal.”

Smith was later asked on Thursday if he knew there would be a possibility throughout the pre-draft process that some teams might want to look at him as a running back or fullback being as he did mainly play in the offensive backfield during his high school career.

“I just heard from like outside scouts earlier on in my draft process that that’s a possibility,” Smith admitted. “People wanted to work me out at that [position] a little bit. Nothing wrong with that, it’s just another opportunity for me to go out and seize and hopefully do a great job at and that’s my goal right now.”

After Thursday’s OTA practice ended, several videos of Smith participating on both sides in a running back versus linebacker open-field drill surfaced on Twitter. During his Thursday post-practice media session, Smith was asked about how big of challenge it is for him to play running back one rep in that drill and linebacker in the next rep.

RBs vs LBs at #Steelers practice today. If you ever wondered what it looks like to have an NFL linebacker running right at you, here you go. Head on a swivel! pic.twitter.com/Rx6WgPLABa

“I just gotta be athletic,” Smith said. “Just don’t think about it. Flip the switch really quick. Football is football, man. If you overthink things, you’re gonna play slow. So, I just came out here and I did running back, that little inside tackling box drill thing with the running backs. I just switched with it. And switching from running back to outside linebacker, you just gotta make the switch quick and that’s what pros do and I just gotta be that pro. So, that’s all I’ve got to do right now.”

“Mostly right now we’re looking at outside and then fullback right now,” Smith said. “So, I mean there might be things to come, I don’t know. That’s for Coach Tomlin and the coaching staff to decide, but I’m just here to help out the Steelers organization any way.”

Smith also made it clear on Thursday that he doesn’t believe working some at fullback during OTA practices will in any way stunt his development as an outside linebacker. In fact, he thinks working on both sides of the football during OTAs might help him become a better all-around player.

“No, I don’t think it should stunt anything at all,” Smith said. “If anything, it should improve my athletic ability. I mean, honestly, work is work out here whenever we’re doing all the drills and stuff. So, any type of running back drills that I’m doing is only going to help my feet, only going to help my mobility and movement. So, whatever type of work that I can do and get in is going to help me be on good on defense or offense. So, either one works.”

That’s certainly a great point by Smith and if anything, he figures to be in great physical condition by the start of training camp thanks to the extra reps he may have received on both sides of the football during OTAs. After all, like he and so many other younger players currently on the team’s offseason roster, he can’t afford to miss practice time during training camp once it gets underway in late July.

Even though it certainly looks like the Steelers are purposefully attempting to carve out a spot on this year’s 53-man roster for Smith by making him a two-way player and four-phase special teams player, it doesn’t sound like the sixth-round draft pick is taking anything for granted with two weeks of OTA practices now in the books.

“I feel like they just want to keep me versatile, whatever,” Smith said. “I don’t honestly know what Coach Tomlin’s plan is. But you know, I know that he’s got a plan and I’m just going to trust in it and that’s all I got to do. I’ve just got to play fast and whatever happens, happens. I mean, I’m not going to look back, I’m just going to keep moving forward.”

Like many of you reading this post, I look forward to hearing more about Smith as the offseason practices progress and I really look forward to seeing how many helmets he ultimately wears in the Steelers preseason opener and the kind of performance he has against the Buccaneers. He might be the ultimate Swiss army player for the Steelers during his rookie season and more than justify himself a roster spot.