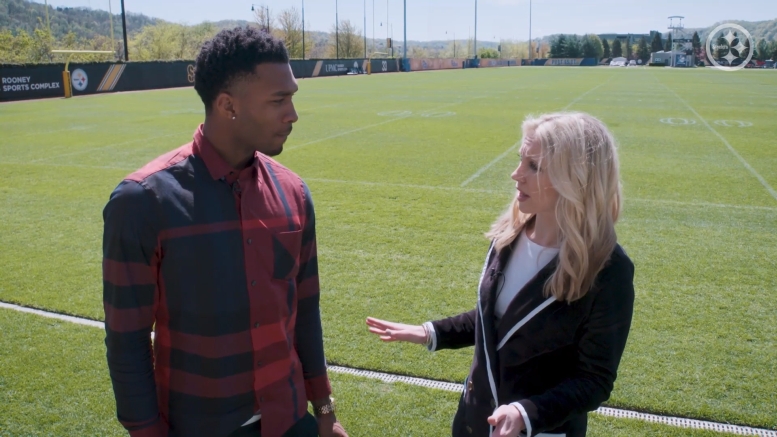 Not everybody has the privilege of being born a fan of the Pittsburgh Steelers. Some have to learn it. Others even have the misfortune of having been born into a family of fans of other teams like the Cleveland Browns. That was the first two decades of new Steelers quarterback Justin Layne.

His father wasn’t simply a diehard Browns fan. He was a diehard Browns fan who painted his bathroom in his home in the Browns’ colors. And I’m not even going to make a joke about how that color pattern is fitting for such a facility on multiple levels, both literal and metaphorical. But fortunately it’s all over now.

That was the first thing that he was asked about by the media after he was drafted during his conference call. “My dad threw away all his Browns stuff”, he said. “He already has all of his Steelers stuff on him right now. We are ready, we are switching it up”.

He added, “we are taking all of the Browns stuff down right now”. That even included beginning to repaint his Browns-themed bathroom, of which there is even video evidence. Missi Matthews asked him about it.

“Oh yeah, that’s true. My dad, he had the whole bathroom painted. He was a diehard Browns fan. He went to Home Depot, he sent me a picture. All that’s gone. He’s painting it right now”, he said. When she asked him if it was really over between the Browns and the Laynes. “I’m done. I don’t know about him, but…”.

It really is an interesting phenomenon, fandom. Imagine that you have a son who is drafted into the NFL by the Baltimore Ravens or the New England Patriots. What do you do? Where do your loyalties lie? How do you compartmentalize your bond to your team versus supporting your son on his new team, even if that is a team that you hate?

Realistically, this is a question that perhaps hundreds of parents have to associate with every year. Surely at least somebody close to every player has a certain allegiance to one team or another. Not every player gets the opportunity to go to the team they grew up cheering for, like Santonio Holmes or Jesse James or B.J. Finney.

Speaking of James, that’s the other aspect of the conversation. He made a business decision in signing with the Detroit Lions (he himself denied that it was about any locker room drama), seeing a greater opportunity and an obviously better contract even though he wanted to be in Pittsburgh.

Surely once you actually get into the league, you see things differently. You have college teammates who are spread out on difference teams around the league and you start to realize that, at least in terms of the rosters, they’re all the same.