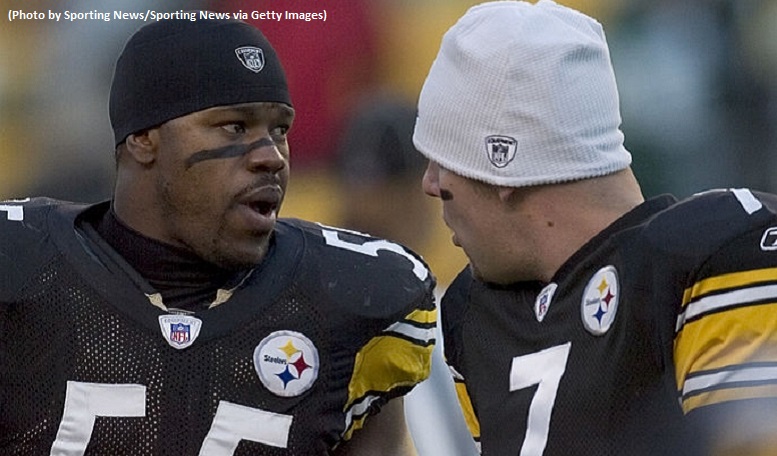 Back in January, after it was announced that Pittsburgh Steelers Head Coach Mike Tomlin decided not to renew outside linebacker coach Joey Porter’s contract, Mike Prisuta reported that some players felt as though Porter was encouraging a sort of schism, a competition between the offensive and defensive players.

Porter is free to say anything he wants now, and he was on NFL Total Access earlier tonight with seemingly plenty to say about his former teammate, quarterback Ben Roethlisberger, and how he has handled himself in relation to other players over the course of his career. In his remarks, in fact, he even seemed to be defending former wide receiver Antonio Brown, at least to an extent.

“You know, it’s kind of like, once you have a bad situation, they’re not going to be pick up the phone”, he said, apparently referring to the fact that the team could not get a hold of Brown for months from the end of the season on. The same was also true of Le’Veon Bell for the past two offseasons.

“If you feel slighted by any way—any teammate, friend, teammate—once you feel like you’d been betrayed in any type of way, I’m not picking up your phone call. You can’t call me and say, ‘oh, I’m sorry’ the next day”, he went on. “I need you to be sorry when you did it. You can’t be sorry that late. So those relationships went the other way”.

“Now that he’s being a man and apologizing now, it’s just a couple days too late. I mean, it probably all could have been avoided if he was coming to them and saying, ‘you know what, I didn’t handle that the right way’. But that’s the way he chose to go about it and apologize, and it’s just a little too late”.

To be honest, if these were Porter’s private thoughts, then I can understand if he was removed from his coaching position in the name of some sort of culture shift. He went on to insinuate that Roethlisberger both abuses and flaunts the power that he holds with the organization.

“It’s clear that he has the power, and how he uses it, he uses it for him. You love to see the guy that, like when [Jerome Bettis] was our captain and when I was moving into that role, you want the locker room to love you the whole time”, he said. He added that the only relationship he had with the front office was when he got in trouble.

Now, it would be impossible at this point for the organization to deny there isn’t some kind of difference between Roethlisberger and the rest of the roster after the comments they’ve made this offseason. But anybody without blinders on knows that’s true of legitimate franchise quarterbacks.

“Even if it isn’t fair, fake me out to make me think that it’s good and then I’ll give you everything”, Porter suggested. “But when you show me you have it way better than me, yeah, you’re going to create resentment”.

How many players in the locker room feel the way Porter does, I wonder? Might he even have had an influence in shaping how players felt about Roethlisberger? Was he telling his players that Roethlisberger thinks he’s better and more important than them?