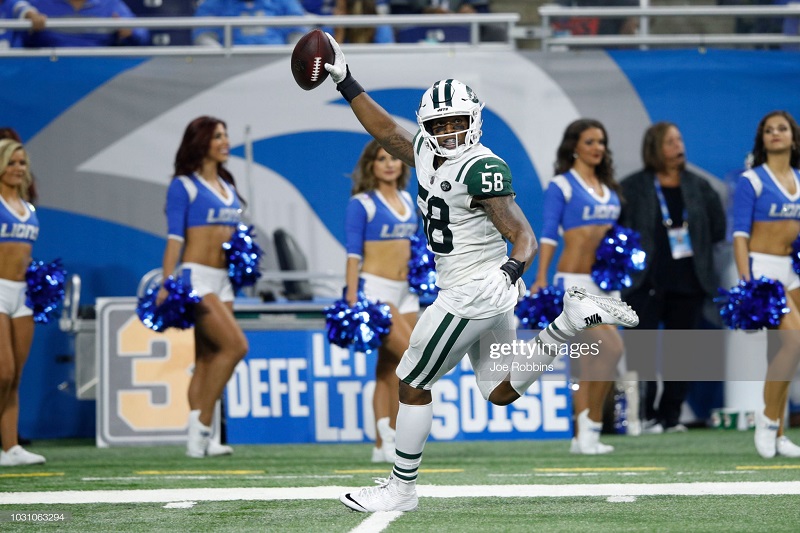 If you listened to the most-recent episode of ‘The Terrible Podcast’, you heard NFL scout Dave-Te’ Thomas talk about how the Pittsburgh Steelers might should and could have interest in trading for New York Jets linebacker Darron Lee in the coming few weeks. While his suggestion that the Steelers should trade for Lee isn’t one we haven’t already heard before, with free agency now virtually over and the draft less than two weeks away, now is probably a good time to dig deeper into the possibility of such an acquisition happening.

For starters, Lee is indeed likely to be a former member of the Jets in the next few weeks and especially if New York can get a day-three pick in return for him. The former first-round draft pick out of Ohio State has had a rough NFL career to date and that includes him being issued a four-game suspension last season for violating the NFL Policy and Program for Substances of Abuse. Prior to him being suspended last season, Lee had registered 74 total tackles, 3 interceptions and 5 passes defensed in the 12 games he played in.

In case you’re curious, Pro Football Focus gave Lee a 72.4 grade for his 2018 play and that score was a huge improvement over his first two seasons in the NFL. The biggest jump that Lee made grade-wise with PFF last season, however, was in the coverage department and that’s not overly surprising with him registering the 3 interceptions, the first 3 of his NFL career.

With Lee being an Ohio State product, it’s obvious that injured Steelers linebacker Ryan Shazier already knows quite a bit about the player who had to follow in his college footsteps. Perhaps having Shazier as a locker room mentor would indeed help Lee grow up more off the field and also help move him closer to becoming the NFL player on the field many expected him to be coming out of college. With that said, the Steelers have already invested $6.75 million for 2019 into free agent linebacker Mark Barron this offseason and also restructured the contract of the team’s other starting linebacker Vince Williams, which means he’s sure to be around at least through the 2020 season.

From a financial standpoint, just a few weeks ago, Jets general manager Mike Maccagnan was asked about the future of Lee with the team following the signing of free agent linebacker C.J. Mosley and while he wouldn’t say that a trade of the former first-round draft pick was imminent, he made sure to advertise that the contract of the Ohio State product is a very affordable one to manage.

“Quite frankly, Darron’s contract is not a big contract,” Maccagnan said of Lee at the annual league meetings a few weeks ago.” I think it’s only about $1.7 or [1.8] million. It just gives us a lot of pieces there right now and we’ll figure it out as we go forward.”

In theory, Lee’s contract is very manageable for teams who might be interested in trading for him in the coming weeks as he’s due a base salary in 2019 of just $1,843,860. However, 2019 is currently set to be Lee’s final year of his rookie contract and thus he’ll be scheduled to become an unrestricted free agent next offseason unless he were to sign an extension or have his fifth-year option picked up very soon.

To summarize, while the Steelers could likely acquire Lee from the Jets for a sixth or seventh-round draft pick during this year’s draft should they fail to land a top inside linebacker in the first several rounds, unless the team is willing to also pick up his fifth-year option immediately after dealing for him, he would stand to potentially be just a one-year rental. Lee, if acquired by the Steelers, would also likely be just a backup and special teams player in 2019 barring injuries to either Barron or Williams and thus it would be hard to justify picking up his fifth-year option after trading for him.

In closing, I will be surprised if the Steelers do wind up trading for Lee between now and the end of the draft. Had the team not signed Barron as a free agent this offseason, however, a trade for Lee would make a little more sense. If, however, the Jets aren’t able to trade Lee and they ultimately decide to cut him at any point between now and the start of the regular season, the Steelers should at least look into signing him even though the odds of them getting him to agree to a cheap multi-year deal would be extremely low.