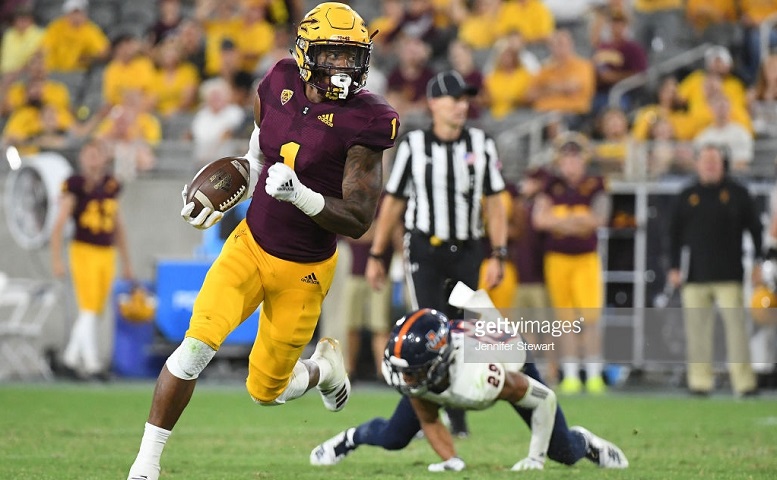 Scouting a prospect is often compared to putting together a giant puzzle piece. That puzzle piece contains four moving parts that must be studied and taken into consideration. Those four parts include statistics, film, athletic testing and character. With statistics and film available online and the NFL Combine being bigger than ever, it is easier than ever for the public to come to their own conclusions on prospects. A prospect’s character is one area that remains very difficult to explore, unless you are a professional scout, but through intensive research, perhaps the task is not as impossible as it seems.

No one has ever doubted N’Keal Harry’s talent on the field. The Arizona State wide receiver has been producing since his freshman season, when he set a freshman school record with 58 receptions. Harry will be the first to admit though that he had some struggles off the field but direction from former teammates Kalen Ballage and Demario Richard helped guide him.

“More than anything, I learned how to conduct myself. I had some trouble adjusting to things when I first got to college, and it was really the off the field stuff with those guys that helped me the most,” says Harry.

Harry has developed into a real playmaker since then and is one of the top receivers in this year’s draft class after recording over 1000 receiving yards in each of the last two seasons. While the receiver’s play on the field is easy to decipher, his story off the field is a lot more complex.

“My grandmother has taught me so much about life and every day I cherish her. She’s sacrificed so much for me in my life and she is an inspiration. She’s taught me about hard work, respect and about doing things the right way,” says Harry to El Paso Times.

Harry is a true family man, in the same article, he states that one of his career goals is to be able to help send his sister Rheanna to college. The receiver alludes to his grandmother as a large reason why he has remained so humble despite all the praise and accolades coming his way.

“She wants to make sure I’m not that type of guy that is always talking about myself or that’s always out there acting a fool. I’m really doing that for her because she’s always told me when I leave the house, I’m a direct reflection of her and she always told me don’t embarrass her, or the name on the back of your jersey. So, I make sure I’m remaining humble at all times,” says Harry.

When it comes to family, the Arizona State wide receiver also has a very close-knit family in the locker room as well. An article from The State Press gave insight into how teammates and coaches felt about Harry’s ability and work ethic.

Herm Edwards, Arizona State’s head coach, also spoke volumes about the receiver’s competitiveness, stating “The thing I love about the guy is that he’s a competitive young man.”

Often times, a wide receiver’s production and statistics offers just a surface level look at the player’s motivations. Is it for money, fame or glory? It is easy to determine that when it comes to Harry, it is for neither of the three. What powers the soon to be NFL receiver’s game is the most pure and genuine motivation of all – family.