Mike Tomlin will be heading into his 13th draft as head coach of the Pittsburgh Steelers and over the years, him and General Manager Kevin Colbert have certainly had their fair share of great draft classes. The recent 2017 draft class that saw the team select T.J. Watt, JuJu Smith-Schuster and James Conner is a class that has the potential to be an all-time great group but it is still too early to determine. Until then, perhaps a series of benchmarks could help determine what has been Tomlin’s best and worst draft class since he arrived over a decade ago.

“Created by PFR founder Doug Drinen, the Approximate Value (AV) method is an attempt to put a single number on the seasonal value of a player at any position from any year (since 1950).” 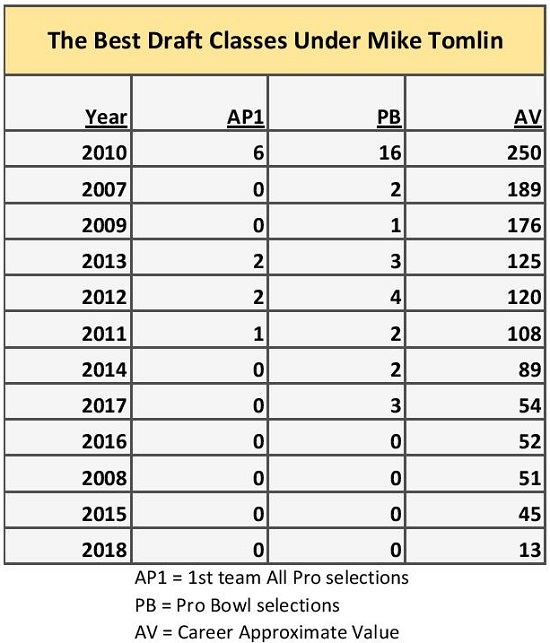 It is really no surprise that the 2010 draft class is Tomlin’s best draft by a large margin. The 2010 class has compiled four more first team All Pro selections, 12 more Pro Bowl selections and 61 more AV than the next closest draft class. The 2010 draft class produced two elite players in Maurkice Pouncey and Antonio Brown and two serviceable to good players in Emmanuel Sanders and Jason Worilds. Had Worilds not decided to surprisingly retire follow the 2014 season, the gap between the 2010 draft class and the rest would have likely been substantially larger. When looking at the top players drafted under Tomlin by Career AV, there are three contributors from the 2010 class in the top ten. 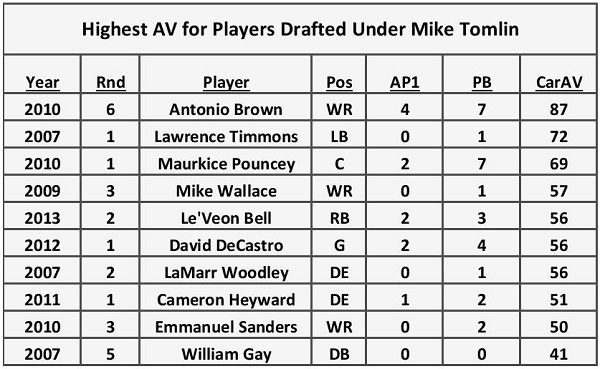 Brown and Pouncey make up two of the top three draft picks by Tomlin, while Sanders just sneaks in the top ten at number nine. When it is all said and done, it is likely that the Steelers look back at the 2010 draft class as one of the best in team history.

Coming in second is Tomlin’s very first draft class in 2007. Tomlin hit back to back home runs with his first two selections as head coach of the Steelers, selecting Lawrence Timmons and LaMarr Woodley. The team then also added a key piece in William Gay in the fifth round. The 2007 draft class shares the honors with the 2010 class as the only draft classes to have three players inside the top ten AV earners under Tomlin.

Looking at the bottom of the list now, it is fairly easy to notice that Tomlin did not have the same luck with his second draft class in 2008. The 2008 draft class which saw the likes of Rashard Mendenhall, Limas Sweed and Dennis Dixon join the team contributed 0 Pro Bowl selections and just 51 career AV. Consider that in just two seasons, the 2017 draft class has already surpassed the decade old 2008 draft class.

Speaking of the 2017 draft class, it is still too early to crown them with the same honors as the 2010 or 2007 draft class but they are well on their way. In just two seasons, they have produced 54 AV and three Pro Bowl selections. Watt, the 2017 first round pick, exploded in his sophomore year, recording 13 sacks. Smith-Schuster, the second-round pick, won team MVP after a season in which he almost exceeded 1500 receiving yards and Conner, nearly exceeded 1000 rushing yards in his first season as a starter. The potential is there for the 2017 to become an all-time great class, now it’s just up to them to continue producing.