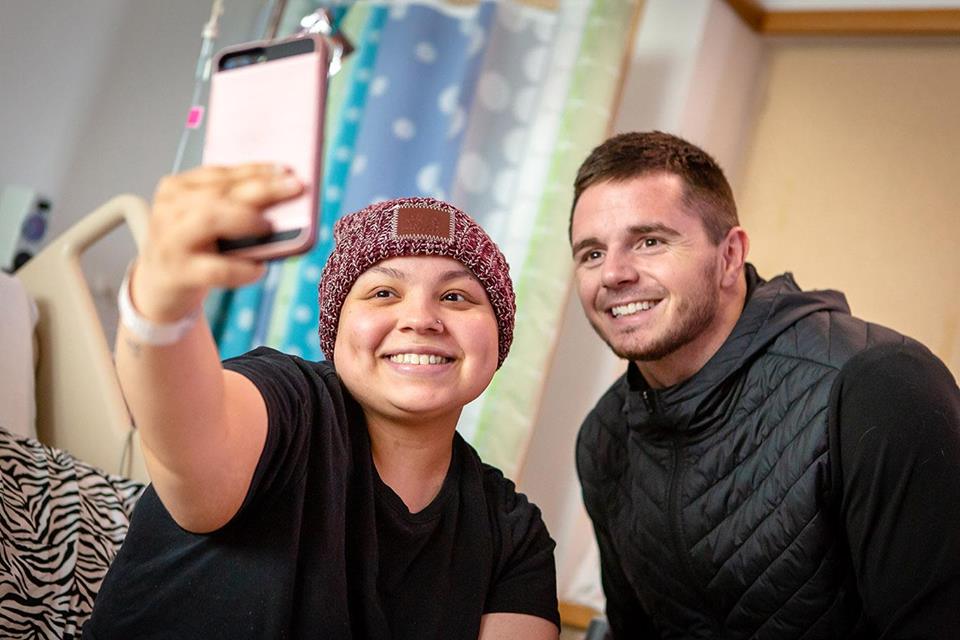 Ryan Switzer has only been with the Pittsburgh Steelers since late August, but he has already taken strides in trying to make it his home for the foreseeable future. The 2017 fourth-round draft pick was acquired via trade from the Oakland Raiders last year, after he was previously traded to the Raiders from the Dallas Cowboys.

He said earlier this offseason that he felt at that point he was on the verge of retiring, believing that he wasn’t wanted and that he was not going to have an opportunity to make it in the NFL. He said that he would give the Steelers a few weeks and see how things go. He found it, and his teammates, much to his liking instead.

But he hasn’t just found a home in the locker room. He’s also taken it upon himself to become a charitable member of the community, and his goodwill of choice seems to be the UPMC Children’s Hospital, where he paid a visit yesterday and posed for pictures with many of the children there.

If this sounds familiar, it should. You might recall back in December Switzer got into a minor spat on Twitter with a local radio personality, Colin Dunlap, whose seven-year-old daughter is being treated for leukemia there.

The two ultimately buried the hatchet rather amicably and it ended up turning into a pair of donations for the hospital, to which Switzer would pay a visit in early December. But it almost seems as though it’s become something of a routine occurrence for him since then.

Ryan Switzer loves a challenge. And he especially loves one that helps out others, in particular kids. pic.twitter.com/bVMcxvW3DX

Switzer barely contributed offensively during his rookie season with the Cowboys, but he managed to put up meaningful numbers with the Steelers last year in spite of the fact that he was tasked with learning the offense on the fly and was playing behind a pair of Pro Bowlers. He had the third-most receptions and third-most receiving yards among wide receivers on the team.

This year, even with Antonio Brown gone, it’s still not entirely clear how big his role will be. JuJu Smith-Schuster will obviously be the number one receiver, with second-year James Washington and free agent addition Donte Moncrief competing to start. Presumably, the loser of that battle will also see the majority of the number three receiver snaps.

Aside from Switzer, there is also Eli Rogers, who largely played Switzer’s role on the team—sans handoffs—before he was here. But Rogers missed most of last season with a torn ACL before being activated late in the season.

So he is already figuring to be fighting for primarily number four receiver snaps, with perhaps a timeshare’s worth of opportunities at the three spot. If a draft pick is added to the mix, it will be hard for him to find playing time.

But, aside from the fact that he is also their return man, he also appears to be a good man, and the Steelers, especially this offseason, shouldn’t have much difficulty finding a place for such a player.